The land of the freed slaves

Liberia was founded in 1847 by freed slaves from the USA. In 1840 there were 4 million slaves in the USA. But more and more people believed slavery was wrong. Some people thought the slaves should be freed and made US citizens. Others thought they should be returned to Africa.

From 1820 on, around 15,000 freed slaves were transported by ship to the part of Africa which was then named Liberia. Liberia means 'freedom'. The capital city was named 'Monrovia' after James Monroe, who was President of the USA at the time.

The freed slaves brought with them the way of thinking that they themselves had experienced: that some people were better than others. They had been treated badly. In the new country they became the highest in society. Those who were already living in the region were treated badly by those who came from the USA. The new arrivals, the Americo-Liberians, put themselves in charge and became the country's upper class. They still are. The unfair division of power was one of the reasons for the civil war.

The rebel leader Charles Taylor said that he would free the country from the Americo-Liberians. But instead he took power himself – and Charles Taylor himself is an Americo- Liberian.

Lots of things in Liberia are similar to the USA: the flag is almost the same as the US flag, but it only has one star in the upper left-hand corner instead of 52. Much of the constitution is the same, the currency is called the dollar, and the people speak English.

It was Charles Taylor who started the war in Liberia in 1989. He promised it would be over in three days. But it went on for 14 years. 200,000 people were killed and half the population fled to neighbouring countries. Over 20,000 children were forced to become soldiers. 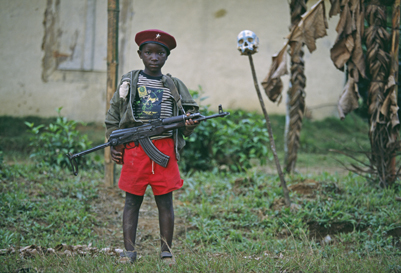