At the beginning of this story, Kimmie goes to school. He always sits at the front so he can hear the teacher and answer quickly if he is asked a question. He loves learning new things and knows that he is smart. He doesn’t care that his classmates tease him, saying that they can’t see what the teacher writes on the chalkboard because Kimmie’s big ears are in the way. Rumours begin to spread that rebels have crossed the border.

On TV, the President talks about confiscated weapons and images of burnt out villages are shown. “We have come to free the people of Liberia. It will take three days and there will be no bloodshed,” says rebel leader Charles Taylor on the radio.

“I’m afraid,” says Kimmie, and his mother tries to comfort him. But things don’t calmdown. Quite the opposite happens. Rockets start hitting houses, and gunfire goes on for hours at a time.

Had to flee
Kimmie and his mother spend more and more time hiding on the floor. Then one evening, an explosion shakes the whole house. Shortly afterwards there is banging on the door. Fifty armed men and boys are standing outside. None of them wear uniforms, but they have weapons slung over their shoulders. One of them says:

“We have come to free Liberia. Stay inside!”
As soon as the rebels have gone, Kimmie and his mother sneak out the back door. They follow the flow of people fleeing in silent terror. They reach a university, which has been transformed into a refugee camp. Kimmie looks around in shock. There are sick children crying, and people with empty looks on their faces, staring into space. The stench makes Kimmie sick. They manage to find an empty bit of floor in one of the buildings, and it becomes their home. Kimmie and his mother have nothing with them. They have to beg for food from other refugees, and they hunt for edible leaves and roots.

The water they manage to get hold of is not clean, but they have no choice but to drink it. That’s when Kimmie gets cholera and becomes so ill that people think he’s dead.

Children must be heard!
As soon as he has his strength back, Kimmie starts helping children affected by the war. He gathers the children in his area and suggests that they tidy up all the debris left by the war. The children make an enthusiastic start and all the people living in the area are delighted.

Every time Kimmie and the other children manage to achieve something, they feel good and it gives them strength to keep going. A UN peacekeeper gives Kimmie a copy of the UN Convention on the Rights of the Child. “Wow! Do you know what?

“Us children have rights!” says Kimmie to the other children.

“We have to make sure that they are respected here too!”

>Read more about Kimmie and his work

“Liberia is my home,” Kimmie says. “I was almost one of the children who died in the war. Don’t forget that every child who dies because of war or famine could have been a person who made the world a better place. 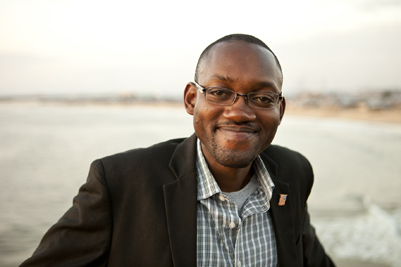