Kimmie gets to meet President Charles Taylor at his office. Kimmie goes alone, because nobody else in the child rights group dares go with him. They know that people who have criticised President Taylor have disappeared and been found dead. Kimmie steps through the door and finds himself face to face with Charles Taylor.

He is overcome with fear, but he doesn’t show it. He says that he has seen child soldiers in training and that this has to stop, in accordance with the UN Convention on the Rights of the Child. President Taylor flies into a rage and leans towards Kimmie shouting:

“I’ll tell you something my young friend, if you do anything about this, you are at risk of disappearing, do you understand?”

“I understand, Mr President,” replies Kimmie and hurries out. He can’t help checking to see if he’s being followed. But whatever the President said, this news has to get out.

Passport for escape
The next day, Kimmie organises a press conference. He talks about what he has seen and recorded at the military base. The story makes headline news in all the newspapers and on radio and TV. The President denies that the army is training children, and says that it is Kimmie who is a ‘threat to Liberia’s security’.

Kimmie realises he is in danger. He no longer dares to sleep in the same place for more than one night. Then Kimmie gets a letter from the US Embassy, asking him to attend a meeting.

“We want to help you leave Liberia,” says the ambassador.

“It’s too dangerous for you here. President Taylor has already interrogated your friends, and people are looking out for you at the airport and the harbour.”

Six months later, Kimmie is able to fly to the USA. He is alone, and far away from his beloved mother. At first he flips burgers in Delaware. But soon he manages to get into a good school where he gets top grades, and can go on to university.

But Kimmie hasn’t forgotten his promise to help children affected by war. Along with a few other students, he starts Youth Action International (YAI). This is an organisation where young people support children and young people affected by war, not only in Liberia but in other countries too.

Five years later, Kimmie is able to return to Liberia for the first time. The war is over and Charles Taylor has fled to Nigeria.
Most people would have chosen to stay in the US and live a more comfortable life there, but Kimmie came home.

“Liberia is my home,” he says. “I was almost one of the children who died in the war. Don’t forget that every child who dies because of war or famine could have been a person who made the world a better place.

>Read more about Kimmie in the Globe magazine 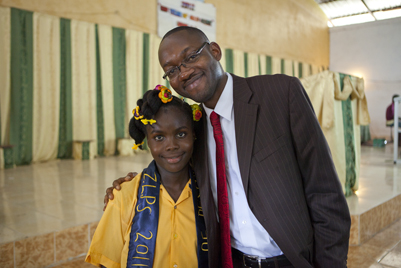 It’s the end of term at Zoe-Louise Preparatory School in Monrovia and Anthionette, 12, is introducing today’s speaker:

“Kimmie Weeks is a role model for us, because he works hard to make life better for children in Liberia.” Kimmie’s organisation, Youth Action International, has trained the teachers at Anthionette’s school and provided more fun school resources.

It doesn’t matter how old you are or what your background is,” says Kimmie. “I grew up with no father, I was hungry and I had to beg for money to pay my school fees. Keep fighting!

Don’t give up! Make Liberia a better place to live!”

“I want to be a just lawyer,” says Anthionette. “Because here in Liberia, many lawyers are unjust. Anyone who has money can make sure guilty people get away with crimes.

That’s not good. I want Liberia to remember me as the Just Lawyer.”