Violence, lack of healthcare and widespread poverty make Afghan women the most vulnerable. One in eleven women die when giving birth. Four in five girls are married off through forced marriage or arranged marriage. Only one in ten women can read and write.

War during many decades
There have been wars going on in Afghanistan for over thirty years. Only the old people remember a time of peace. Sometimes foreign armies have occupied the country. At other times different Afghan groups have been at war with each other. Many innocent people have been affected by the wars. All Afghans have relatives who have been killed or injured, and many families have had to flee their homes. Today, the government is fighting the Taliban and other rebel groups, with help from soldiers from the USA and other countries. Neither side seems to be ‘winning’. The war just keeps going.

The Taliban
The largest rebel group is called the Taliban. They used to govern the country, and they made it illegal for women to work and girls to go to school. They also banned dancing, music, kite flying and TV. Anyone who didn’t obey was killed or whipped.
The Taliban is an Islamic fundamentalist movement. They are fighting to regain power. They plant bombs, lay ambushes, and kill many people. But the government troops and the soldiers from the USA and other countries sometimes kill ordinary people too.

Burka gives protection and oppresses
Many girls and women in Afghanistan are oppressed. Men make the decisions, and the burka is a way of limiting the freedom of women and girls. According to Afghan tradition, women should stay in the home and should not be seen outside, while the men are out in society.  However, all women in burkas are not powerless. They can have a lot of influence over the home, the housekeeping, bringing up children, and marriage. They can also wear a burka on the way to work, but take it off while they work. The burka can give a kind of protection. 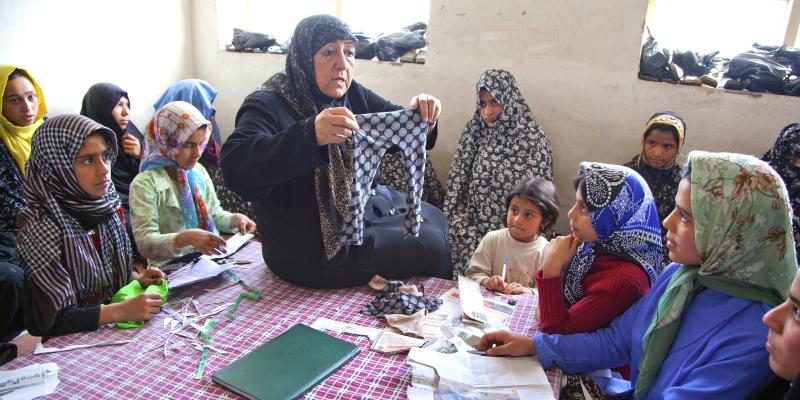