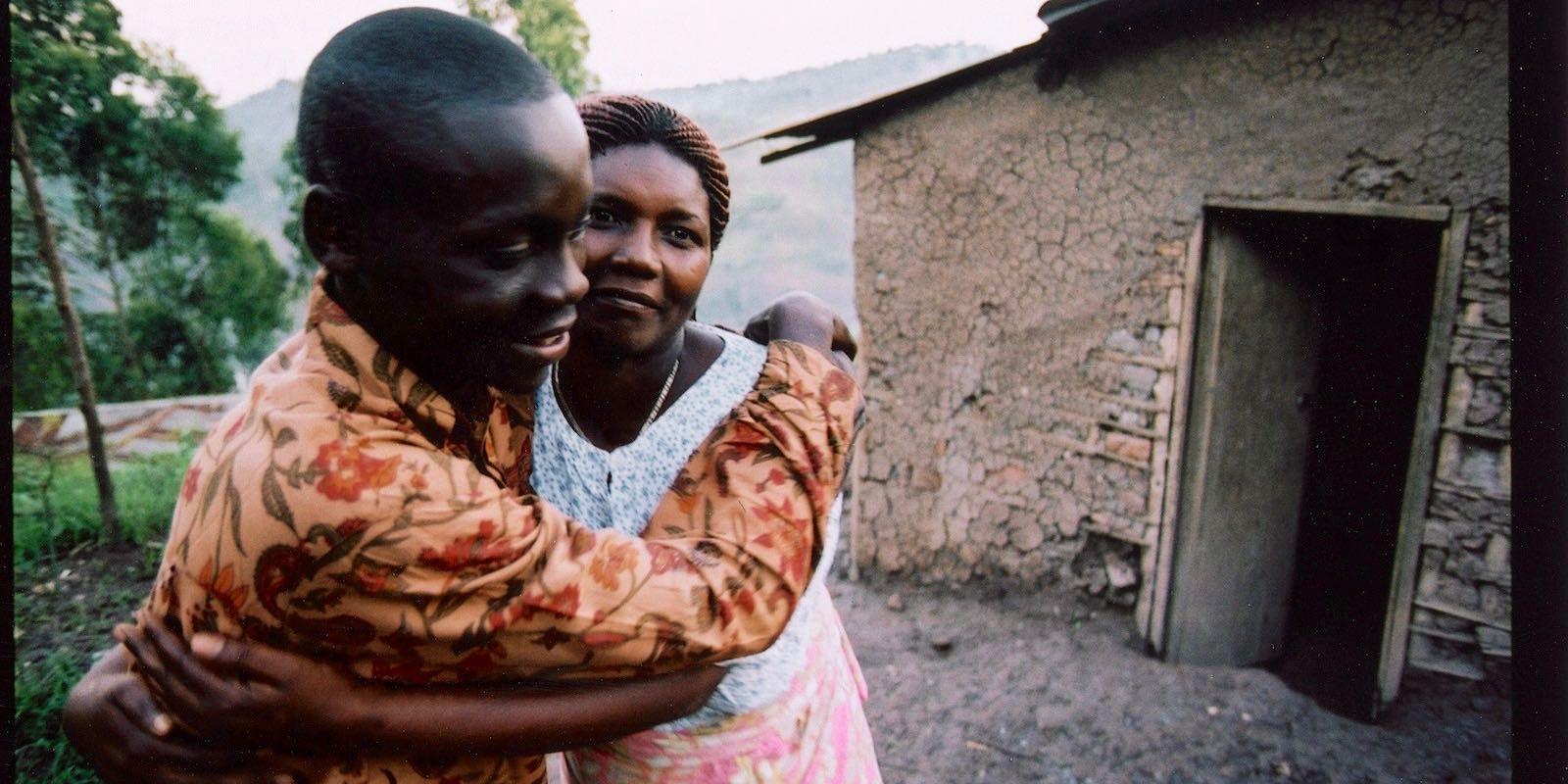 Bwami represented child soldiers and children in was and conflict on the WCP Child Jury.

“One day when I was nine I was herding my family’s goats and three of them disappeared. As a punishment, my father sent me to stay with my brother in another village. It was terrible. I missed my parents and I had to quit school, which I loved. Early one morning, my brother’s village was attacked by one of the armed groups in the war in Congo. We fled to the forest because we thought we’d be safe there. However, I and 170 other boys were found and forced to become soldiers. The rebels gave us drugs and traditional medicine that made us unable to think about anything other than killing and destroying. Once we had been trained we were forced to go to war. Another boy and I were scouts. We went first and we killed many soldiers, men, women and even children. The rebels forced us to capture other boys and make them into soldiers too. Many young girls were raped. I was seriously injured in one of the battles, when some shell fragments hit my face and the back of my head.
After three years I escaped and I finally managed to find my mother again. Now I go to school here and I’m a member of a children’s rights group where we learn about our rights. I feel alive again. I want to tell people about my life and that children actually do have the right to protection from violence and war. I hate the fact that adults forced me to do awful things to others. I want to fight for children to be treated well, not only in Congo but all over the world.

These are excerpts from the story about the Globe when he was a jury member: Loves being a "normal kid" “When I was a soldier I was never allowed to play. Now I love having fun, playing football and being with my friends. Being normal!” says Bwami. When Bwami was ten, his village in eastern DR Congo was attacked. He was forced to become a soldier and for three years, his life was filled with war and violence. “Now I want to fight for a better life for children all over the world,” says Bwami when he and his friends from his child rights club vote in the Global Vote. Bwami is a member of the World Children’s Prize child jury. On the jury, he represents child soldiers and children in war.

When he was nine years old, Bwami was tending his family’s goats with his friends after school. The boys were playing football with a ball made of plastic bags and string, and soon they forgot all about looking after the goats. “When I discovered that three of my goats had disappeared, I was terrified. I knew that my father would be furious.” And he was. But this time, Bwami’s punishment was not a beating. “I wasn’t allowed to live at home any longer. I had to go and live with my brother, who lived far away. I was to help his wife fetch water, wash clothes and cook food. I had to leave my mother, my brothers and sisters, and my school, which I loved.”

Village attacked One year later, in his brother’s village, Bwami was up early grilling corn cobs for breakfast when suddenly he heard a loud howling noise around the village. “Our neighbours shouted ‘it must be one of the rebel armies’. Their soldiers usually blow goat’s horns before they attack a village. Everyone panicked and ran, and we fled to the forest in the mountains.”
From his hiding place, Bwami could see the soldiers killing both adults and children, and setting fire to his brother’s house. Another armed group was based near the village. These soldiers fled to the forest with Bwami and the others. Bwami thought they would be safe with these soldiers. He was wrong. “After a few days, the soldiers said that all the men and boys had to help them get revenge on the rebels who had attacked the village. One 11-year old boy was scared and refused.
Then one of the soldiers killed him with his machete. After that, no-one else refused. Along with 170 other boys, I was to be trained to become a soldier.”

The training began at six every morning. Bwami and the others climbed trees with heavy machine guns. They crawled along the ground with their weapons and learned to shoot. “They gave us drugs three times a day. They cut us with razors on the chest, forehead, arms and ankles. Then they rubbed a drug into the sores. They put drugs in our food too, and they gave us. The drugs made us able to manage our tough training programme and changed my thoughts. I only thought about bad things, and I wasn’t afraid of anything any more.” Early one morning, Bwami and the other boys were forced to creep down from the mountain with their weapons. Slowly, they approached the village, which the other rebel group had taken over. “My best friend and I crawled on the ground ahead of the others. The only feeling I had was rage. Our group crept forward through the high grass and surrounded the village. I could see that the other group had lots of child soldiers too. Three of my friends and one grown-up soldier were killed in the battle. But many more of the other group died, and the rest fled, so we were able to take back the village.”

Shot a mother The villagers moved back home, but the soldiers forced Bwami and the other boys to carry on fighting. “One crying mother was trying to keep her son in the village. When she screamed and ran after us, the soldiers forced a little boy to shoot her.” But what had happened was only the beginning. For three years, Bwami’s life was filled with drugs, violence and abuse. “Our army killed enemy soldiers and ordinary villagers alike. Men, women and children. Young girls from the villages were kidnapped and made into what we called ‘rebel wives’. All the soldiers abused them, sometimes for hours at a time. We kidnapped boys who were forced to become soldiers like us.” “One afternoon, we were attacked with grenades. Suddenly I felt a terrible pain in my face and the back of my head. I was thrown to the ground and everything went black.” Bwami had been hit by shell fragments. The other boys carried Bwami to safety and a couple of hours later he woke up. Three months later, when Bwami was well again, there was a quarrel going on between two leaders in the group as to who should be in charge. There were rumours that one of the leaders planned to kill everyone who didn’t obey him. Bwami felt threatened.
“In the end, despite the drugs, I felt that everything we did was wrong. I was often sad and I longed to see my mum. But I was too scared to run away. I knew that I’d be killed if they caught me. And the thought of being all alone in the forest while the war was raging scared me. But suddenly it was even more dangerous to stay.”

Finally Bwami ran away with two friends. They walked or ran all day, and didn’t dare stop. They ate seeds and fruit from the trees and drank sap from the lianas of the kunvukeki trees. After three days and nights, they reached Sudan. They stayed there for three months. “I missed my mum and my brothers and sisters a lot, but I didn’t know whether they were alive or dead.”
The boys began the long walk home through the vast DR Congo. They begged for food and ate fruit in the
forest, trying to stay away from all the armed groups.
Five months later, Bwami managed to track down his family. All of them had survived.
“When I saw my mother I couldn’t stop crying. She cried too. I was finally home!”
“I was happy, but I had nightmares and I felt terrible. Mum helped me through the bad times. We talked and talked about everything that had happened. I love her for that.”
One day, Bwami saw a programme on TV about a child rights club in the area. Boys who had been soldiers and girls who had been raped and abused during the war could meet and support each other there.
“I decided I wanted to join, and the first thing that happened when I got there was that I was given The Globe magazine. They told me to read it and learn about the rights of the child. I was totally gripped by the magazine! Reading about people who fight for our rights made me so happy. Today, I know I want to be like that. Someone who fights for a good life for children, not just in DR Congo but all over the world.”

Wants to tell people “I want to tell people about my life, and that children actually have a right to be protected from violence in wars. By telling people, I hope I can help put an end to these terrible things.”