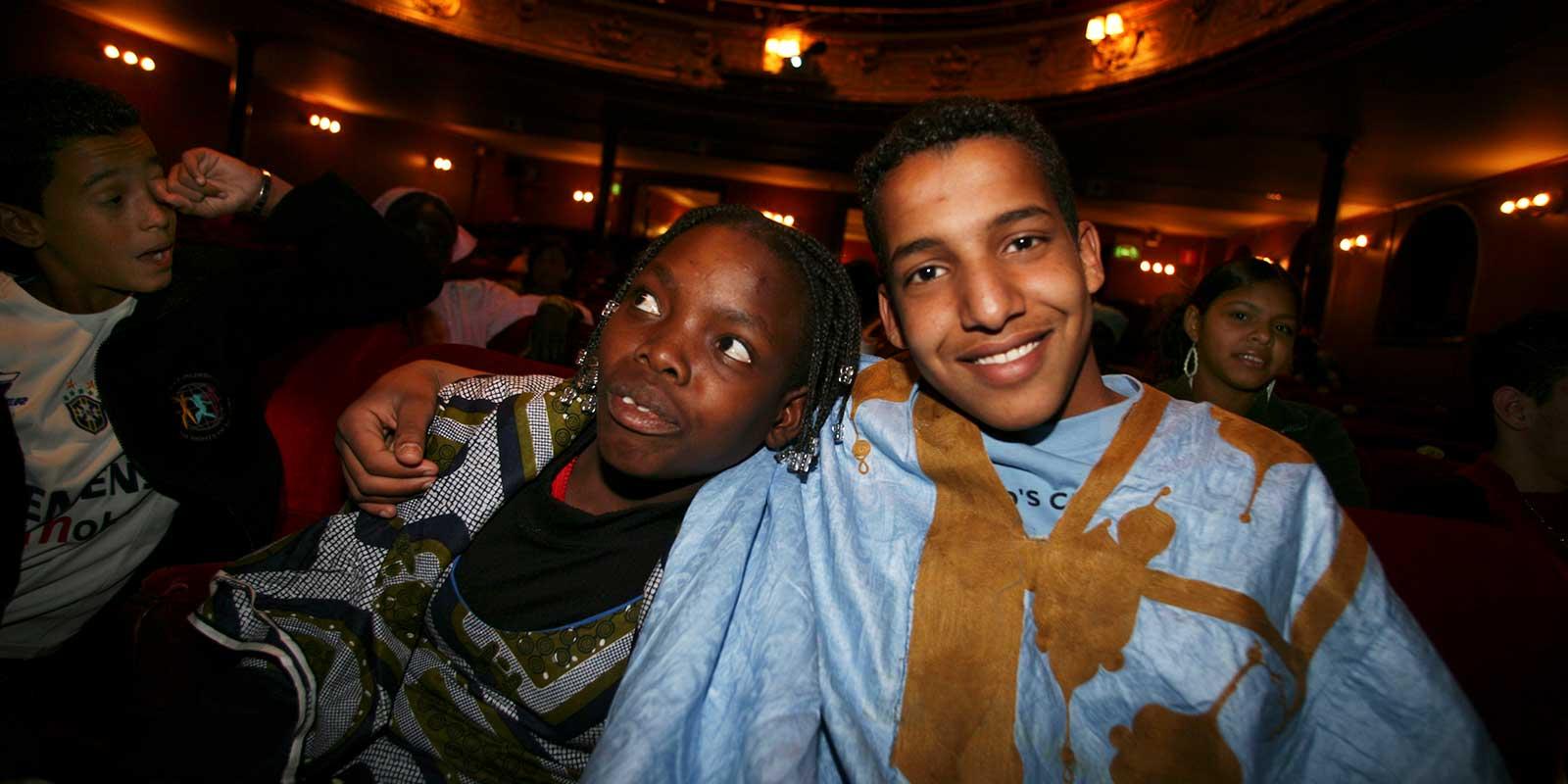 Hassana represented children who are refugees on the Child Jury. Now he is an Honorary Adult Friend of the WCP.

These are excerpts from the story about Hasana when he was a jury member:
Hasana was born in a refugee camp in the Algerian desert, and has spent all his life there. His parents come from Western Sahara. Their country was invaded by Morocco almost thirty years ago, and today some 170,000 Western Saharans live in huge refugee camps in the Sahara Desert. “I have never seen my country, but one day I hope to. I think that all children who are refugees should have the right to return to their home countries.' All the children living in the desert camps go to school. It’s impossible to pursue any higher studies in the camps. “But I want to continue my studies in an Algerian school, because I want to get an education. All the people who live in the camps have discoloured, rotten teeth. That’s because the water we drink is bad. When I grow up, I want to be a dentist. I want to help people have healthy, white teeth.' Hassana loves the desert "There are two things I love," says Hassana. "One is my mum; she is great and I love hugging her. The other is the desert. I love going on excursions into the desert."

It hadn’t rained in seven years. But one day, the sky was filled with dark clouds and suddenly the rain started crashing in the dry desert. At the boarding school, the rain fell so hard onto the tin roof that you couldn’t hear what the teachers said. Water was soon leaking into the classroom. An hour later the children were up to their ankles in water and the walls were starting to fall down. "We had to run out of the school building into the rain. It was scary, but kind of nice too. It hadn’t rained for seven years and everyone who lives in the desert always longs for rain," explains Hassana.

Desert excursion Hassana thinks that boarding school life is sometimes tedious. That is why he is overjoyed when his mother, some days after the rain, asked the headmaster if he could come home for the weekend to celebrate his younger sister’s birthday. Hassana’s family has been living in the Aaiun refugee camp – a labyrinth of houses and tents – for almost thirty years. There are four enormous refugee camps in the desert where some 170,000 West Saharans live. The family celebrates his younger sister’s birthday with an excursion into the desert. In the jeep, his sisters and cousins sing songs, clap their hands and trill with their tongues. A clump of trees appears and everybody screams with delight. They pitch their tent by the trees and Hassana and his uncle bake bread in the sand. His mother prepares the camel meat over an open fire, while the sisters and cousins dance. They do the ostrich dance and pretend to be ostriches. Hassana howls with laughter. "This is almost like living with my nomad grandfather," says Hassana. Meanwhile his younger sister Deigammia, who is six today, does something she’s never done before. She picks some flowers. It was the first time it had rained since she was born, and the rain has made flowers grow in the desert. Deigammia gives her very first flower bouquet to her mum. After the meal, Hassana and his sister Baba and the cousins go and look at the flowers too. "Don’t touch anything made of metal," says his mother anxiously. "They could be landmines. And watch out for scorpions!"

Escape into the desert When his sisters have fallen asleep, Hassana cuddles up next to his mother. They drink the last glass of tea for the day, while his mum tells her story: "We were Bedouins when I was little and moved around in the desert. We had 70 camels and 170 sheep. I was very happy. The only thing I didn’t like was the snakes; they bit the sheep and killed them. When I was eight, some Moroccan soldiers attacked us. I didn’t understand that the Moroccans wanted to take our country Western Sahara from us. The soldiers stole all our livestock and tents and mattresses. We had to flee. I remember wearing two dresses because it was so cold. Many people were killed, but none from our family. We walked endlessly through the desert." "It was winter and icy cold. I used one of my dresses as a tent. Everyone in the family was in tears, saying: ‘How can we survive without our livestock?’. Since then we have been living in refugee camps. For you it is natural to live in a refugee camp because you have never known anything different. But it isn’t natural – we have a country of our own." Hassana sits silently for a while, then he says: "Do you know what I want to do when I grow up? First I want to pass all my exams at school so I can go and study somewhere. I want to be a dentist. There’s something wrong with the water at the camps, it gives everyone brown teeth. Many girls I know don’t want to have their pictures taken because they are ashamed about their brown teeth. I want to become a dentist and help my people get healthy, white teeth. But most of all I want to do it in our own country, Western Sahara."

The ghosts' disco At Hassana’s boarding school, twenty boys share the same dormitory. His friend Abdalai is the best at telling stories. Most of his stories are about djins, the feared ghosts or demons of the desert. At night when they all gather in the dormitory, everyone usually says: "Abdalai, tell us a scary story." "If you meet a djin you must say the magic words quickly: Bismilahi Rahman Rahim, and it will disappear," explains Abdalai.