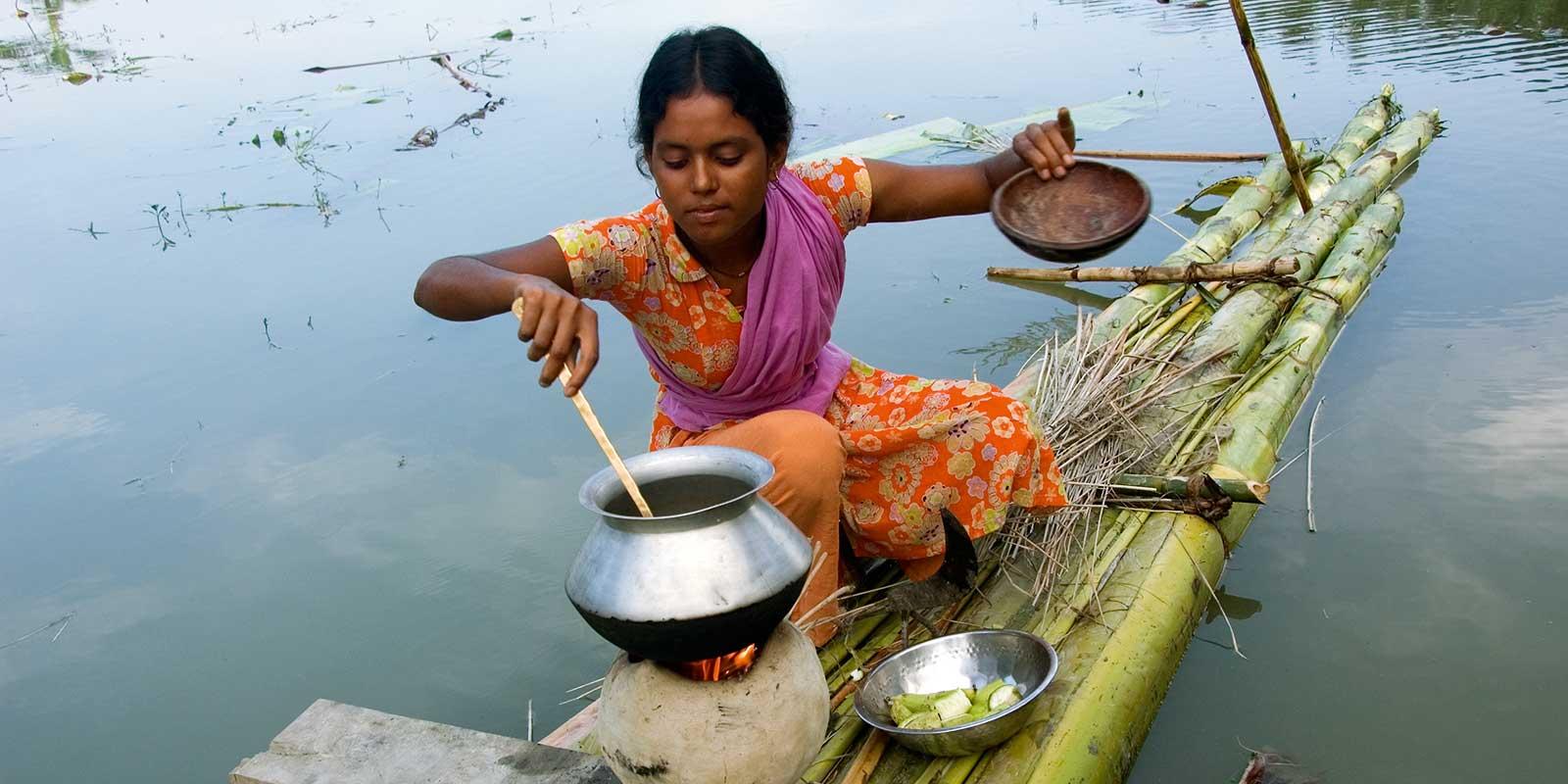 Rebeka from Bangladesh was on the Child Jury representing children who are affected by natural disasters and climate change. She is now an Honorary Adult Friend.

This is an excerpt from the story about Rebeka when she was a jury member:

“The floods destroy our fields. In some places the mud can be a metre deep when the water recedes. It’s really hard to start growing crops again,' says Rebeka. “We have always had flooding here in Bangladesh, but in recent years it has become much worse. It seems like there’s something wrong with nature. I’m scared that my whole village will disappear. I’m also scared of dying,' says Rebeka Aktar. “Our whole village flooded in three days. Even though I live a couple of hundred metres from the river, the water level still came half way up our house. We tried to get the beds and other things above the water level using bamboo stands that my dad made. My dad and my big brother built a raft from banana trees and we cooked our food there, since our kitchen was flooded.'

Bitten by a snake “After a week of flooding, I waded round to the haystack behind the house. While I was trying to get some dry hay for our cows, a snake suddenly fell out of the haystack and into the water. It bit my foot. It made me dizzy and I almost fainted, but I managed to shout for my mum and dad and they came running. They tied a piece of fabric tightly around my leg below the knee to stop the poison from spreading through my body. They carried me to a boat and we went to see a man who sucked the poison out. I cried the whole time and I was terrified that I was going to die. A neighbour was bitten around the same time and she died. The place is teeming with snakes when the floods come, and many people die of snakebites every year. Many die because we have to travel a long way to get to a doctor and it costs a lot of money. Things are hardest for us when the floods come, because so many people get sick. I got an eye infection and a rash. My brother had a fever. Almost everyone in the village gets diarrhoea since it’s hard to find clean drinking water when the dirty river water spills over into our wells and pumps. A few days after being bitten I started to feel better. I paddled around on the banana raft and gathered leaves from the trees for our cows and goats, since they had nowhere to graze. In the end we had to sell our animals to get money for food, since our fields and vegetable patches were under water. Lots of us had to sell cows and goats in order to survive, so everyone got much less money for them than usual.'

The schools were destroyed and it was impossible to get there because of all the water. Most of them still haven’t opened again and it’s so awful not to be able to go to school. We are missing out on our education and that’s no good. Without a good education it’s impossible to have a decent standard of living here in Bangladesh. You remain poor and it’s hard to support your family. Other people often take advantage of poor people who can’t read or write. For example, if you can’t read you might believe that by putting your thumbprint on a piece of paper you’re agreeing to borrow money, when actually you’re being tricked into giving away all your land! I think it’s terrible! Education is most important for us girls. If a girl completes her education she has a much better chance of a decent life. She can make her own decisions and other people, even family members, listen to her much more. What she says becomes more important. In Bangladesh we have a law to prevent girls under 18 from being married off, but it is often broken. Many girls of my age are already married. I think that’s so wrong! At this stage we are still children and we need to learn and develop, not live an adult life. If girls like us get an education I believe we have a much better chance of avoiding being married off at a young age. When I grow up I want to be a teacher. I’ll fight to ensure that all children, especially poor children and girls, have the chance to go to school.'

Scared of dying “We have always had floods, but they have become much worse in recent years. There is more water in the river now and the floods come at strange times of the year. When the water rises there are massive landslides and huge areas of land collapse into the river. Buildings and people are dragged in and children die. If things carry on like this I’m afraid my whole village will disappear. Where will we go then? I really don’t know what will happen to us, and I’m worried about the future. Lots of people will die trying to escape the waters.'