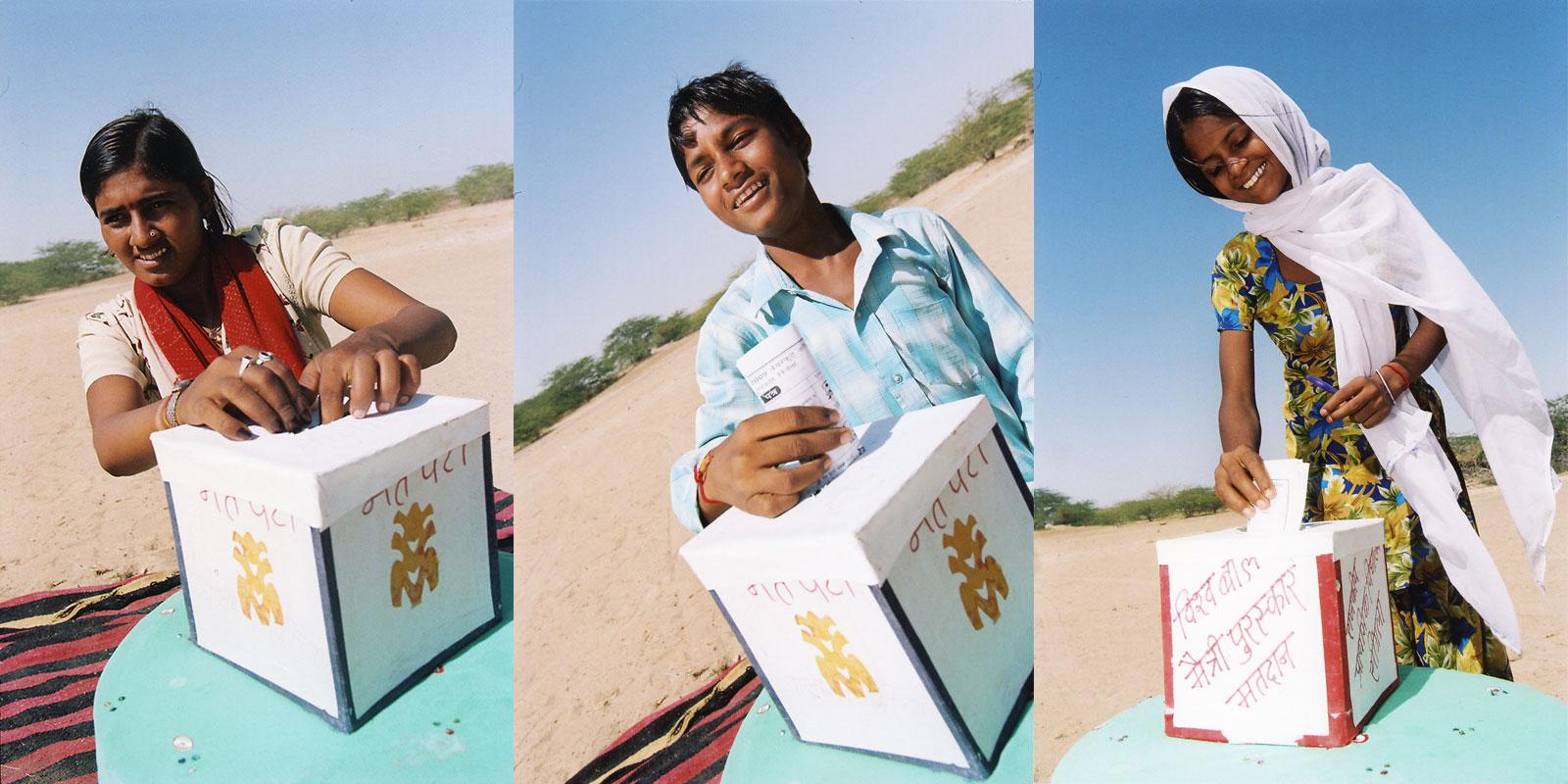 Meet the Child Ministers who help their communities through the world’s first Children’s Parliament.

“During the day I clean the house, fetch water and fire wood, and cook food. During the harvest, which is happening now, I also work in the fi elds with my family. When my day’s work is over, I go to the evening school.
“Once a month the Children’s Parliament meets, and since I am the Minister for Home Affairs, I’m responsible for making sure that everyone who comes gets food and a place to sleep. As Minister for Home Affairs, I also step in and chair the meeting if the Prime Minister can’t come. You could say that I’m responsible for making sure everything works during meetings of the Children’s Parliament. And the Parliament is important, since it gives us children information, knowledge and confi dence. The World’s Children’s Prize and the Global Vote do the same. We learn about the rights of the child, and about people who fi ght for our rights all over the world. Participating in the Global Vote is important to us in India, since we have so many problems here, such as child labour, which stops children from being able to go to school. The Globe magazine teaches us that this is wrong. Everyone who reads The Globe and joins in the Global Vote is changed by the experience. Now that we know how children should be treated, we have to make sure that all the crimes and violations that children fall victim to now stop happening in the future.”
Sajana, 16, Minister for Home Affairs, Children’s Parliament

The temperature is 40 degrees in the shade when the children from the evening schools hold their Global Vote in the desert. One of the voters is the Minister for Water in the Children’s Parliament, 14-year-old Mathara.
“Two months ago, there was a tiny rainfall. Since then not a drop has fallen,” she says.
“I am the Minister for Education in the Children’s Parliament. My most important task is to find the children who don’t go to school in the villages where we have evening schools. I make a list and I take it with me to the next meeting of Parliament, and then we meet with the parents and village leaders and try to solve the problem. All children must go to school!
“Here in Rajasthan, there are lots of girls and boys who don’t go to school, but who are forced to work instead. Especially those of us who are poor and belong to the ’untouchable’ caste, also known as Dalits. And even if we manage to get into a normal school, we often face discrimination. Other children don’t want to sit beside us and that sort of thing. Once there was even a teacher in one of our evening schools who refused to teach two Dalit girls. As Minister for Education, it’s my job to go out and tackle situations like that. I told the teacher, and all the parents, that we’d close the school immediately if these two girls didn’t get exactly the same education as all the other children in the village. After that the girls were welcomed, so now the school belongs to all the children in the village! And that’s how things should be. All children are equally important and have the right to a good life - even those of us who are poor.
“And that’s exactly what the World’s Children’s Prize and the Global Vote is all about. When we vote, we can show our support for those who fi ght for good lives for ALL children. We highlight everything the candidates do, and at the same time we show that children are important. We also show that we know how badly children are treated all over the world, and that that is something we refuse to accept or forget about!”
Ashok, 15, Minister for Education, Children’s Parliament

Every child should get involved

“I am the Minister for Children’s Rights, and the newest minister in the Parliament! It feels great, because now I have the power to do good things for us children. My task is to ensure that all children are treated well in our evening schools. Most importantly, I make sure that not a single teacher hits a single child. If I discover corporal punishment in a school, I report it to the Children’s Parliament and the teacher responsible gets sacked immediately. In India it is very common for children to be beaten, both at home and at school. That makes me angry and sad. How can a teacher hit a child who doesn’t understand? For a child to be able to learn, the teacher has to explain clearly and calmly, at the child’s pace!
“Now I’m in Year 4 of the evening school in my village, and we often read The Globe magazine. It inspires me when I read it, and it makes me want to be someone who fights for children’s rights when I grow up. It felt so good to vote today, to show my support for people who do great things for us children. If we carry on like this, and if all children in the world can join in with the Global Vote, then in the end we’ll have a world where people live in peace and harmony – a holy place!”
Mira, 12, Minister for Children’s Rights, Children’s Parliament 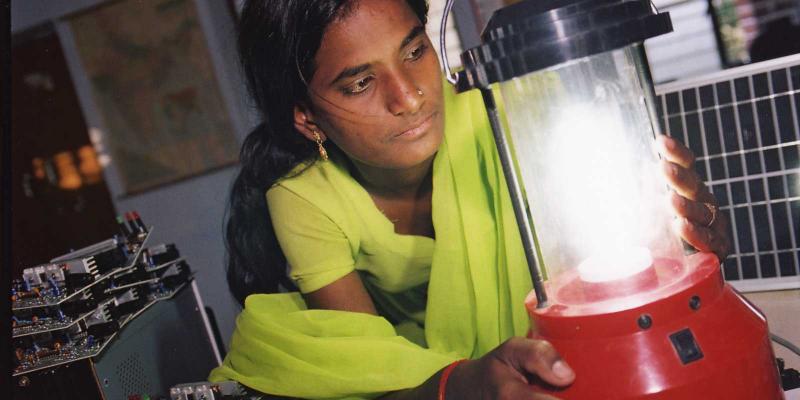 Energy Minister in the burning sun

The sun is scorching down from a cloudless sky throughout Global Vote day in the desert. 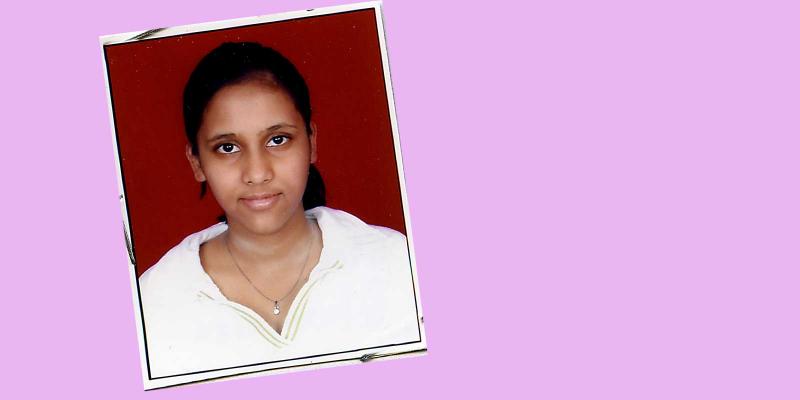 “I personally don’t feel that there is any right which I am deprived of, but in India a girl child is the worst victim. 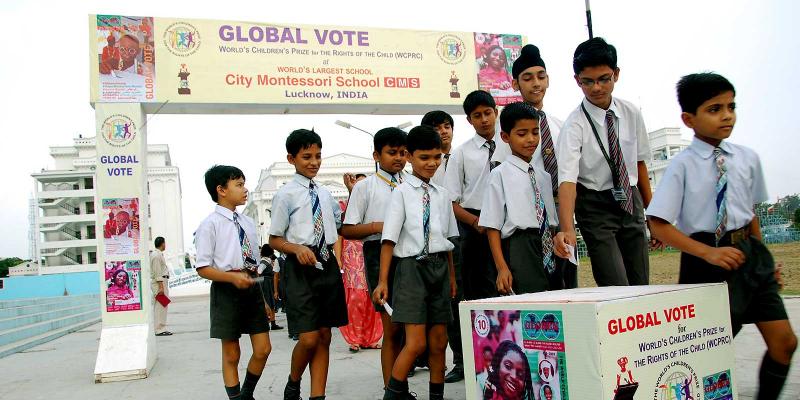 With 785 classes and 39,483 students, City Montessori School in Lucknow, India, is the world’s biggest school.

The temperature is 40 degrees in the shade when the children from the evening schools hold their Global Vote in the desert.
WORLD'S CHILDRENS PRIZE FOUNDATION