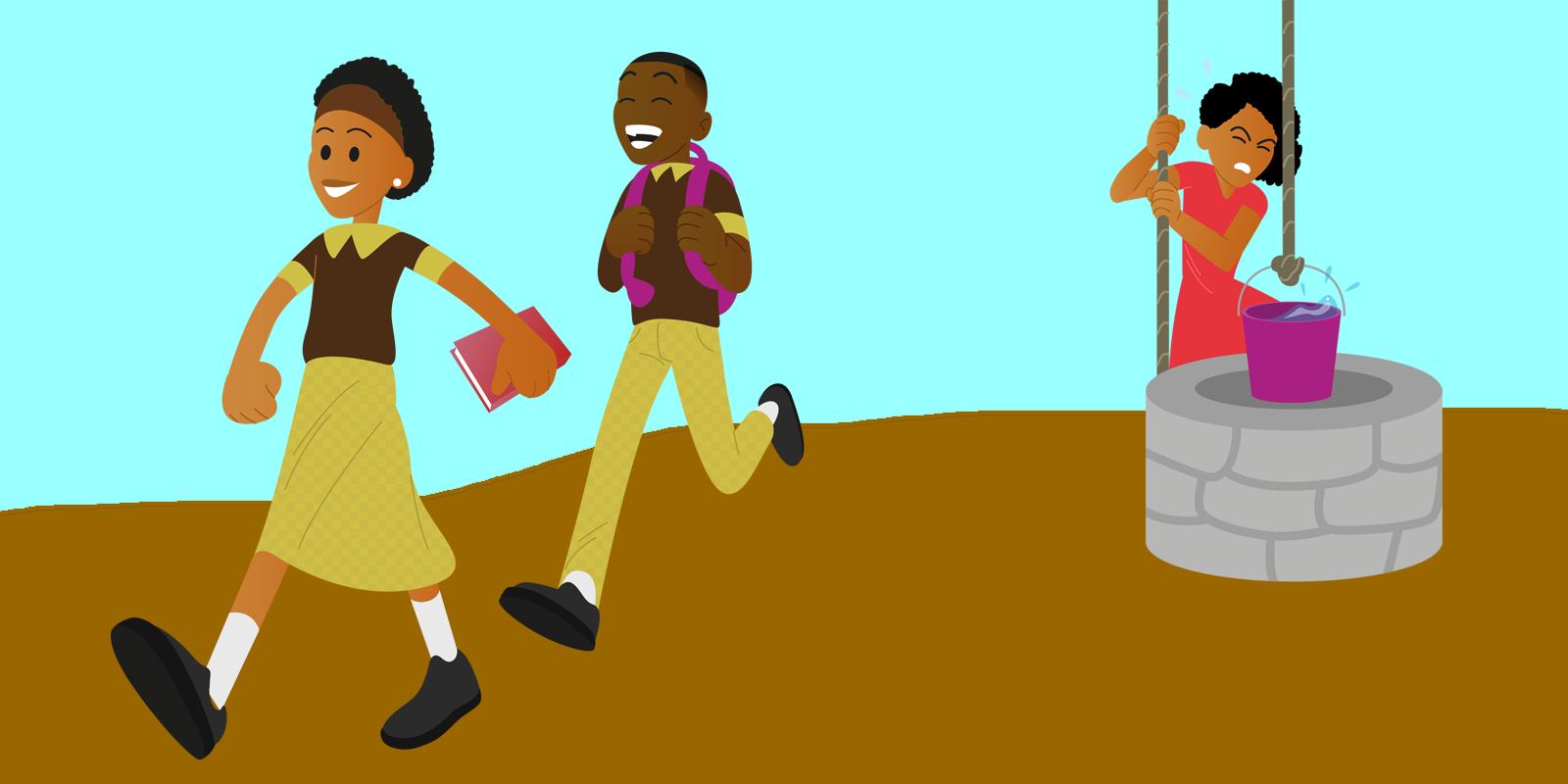 The right to equality is stated in the UN Convention on the Rights of the Child, which almost every country in the world has made a commitment to abide by. The government in your country has promised that it will respect the rights of the child. They have also agreed to try to reach the UN Global Goal 5, for Equality. But what’s the situation like for you at home, at your school and in your free time? Are girls’ rights respected where you live and in your country?

The Convention includes rights that apply to you and every child. It is divided up into sections that are called ‘articles’. Article 2 states that no-one may be discriminated against (treated worse) just because they are a girl. Here are some examples of what the UN articles say about girls’ rights where you live.

Articles 12–15: You have the right to say what you think and to be listened to

All children have the same right to play and rest. Girls often have to do more household chores than their brothers, which means they have less spare time. While they do the cleaning, laundry, cook meals and look after younger siblings, their brothers often get time for themselves. In many countries, girls also have to walk several kilometres to fetch water from a well. It’s often dark outside by the time they have finished all their chores. If there’s no electricity at home, it can be difficult for them do their homework. 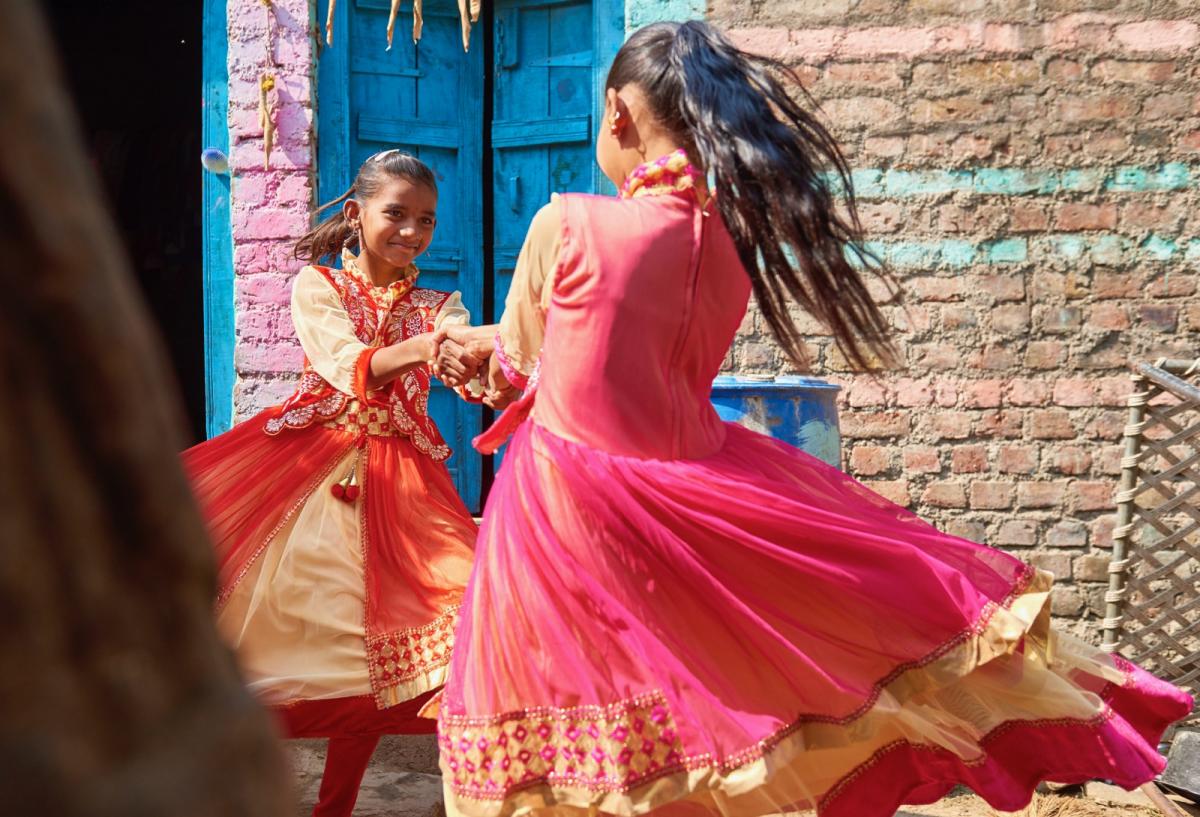 Two girls in India have more time for play , thanks to WCP Child Rights Hero Ashok Dyalchand. Many girls around the world never get to play or rest because they have to work hard in the household. ©Johan Bjerke/WCPF

Article 31: You have the right to play, rest and leisure time

All children have the same right to play and rest. Girls often have to do more household chores than their brothers, which means they have less spare time. While they do the cleaning, laundry, cook meals and look after younger siblings, their brothers often get time for themselves. In many countries, girls also have to walk several kilometres to fetch water from a well. It’s often dark outside by the time they have finished all their chores. If there’s no electricity at home, it can be difficult for them do their homework.

Article 19: You have the right to protection from all forms of violence

No-one may hit or harm a child, yet it’s still common for adults to subject children to violence. Girls and their mothers are particularly vulnerable. Girls are also subjected to violence by their male peers and men outside the home. If girls try to tell someone about it or seek protection, they are often not believed or given any help. 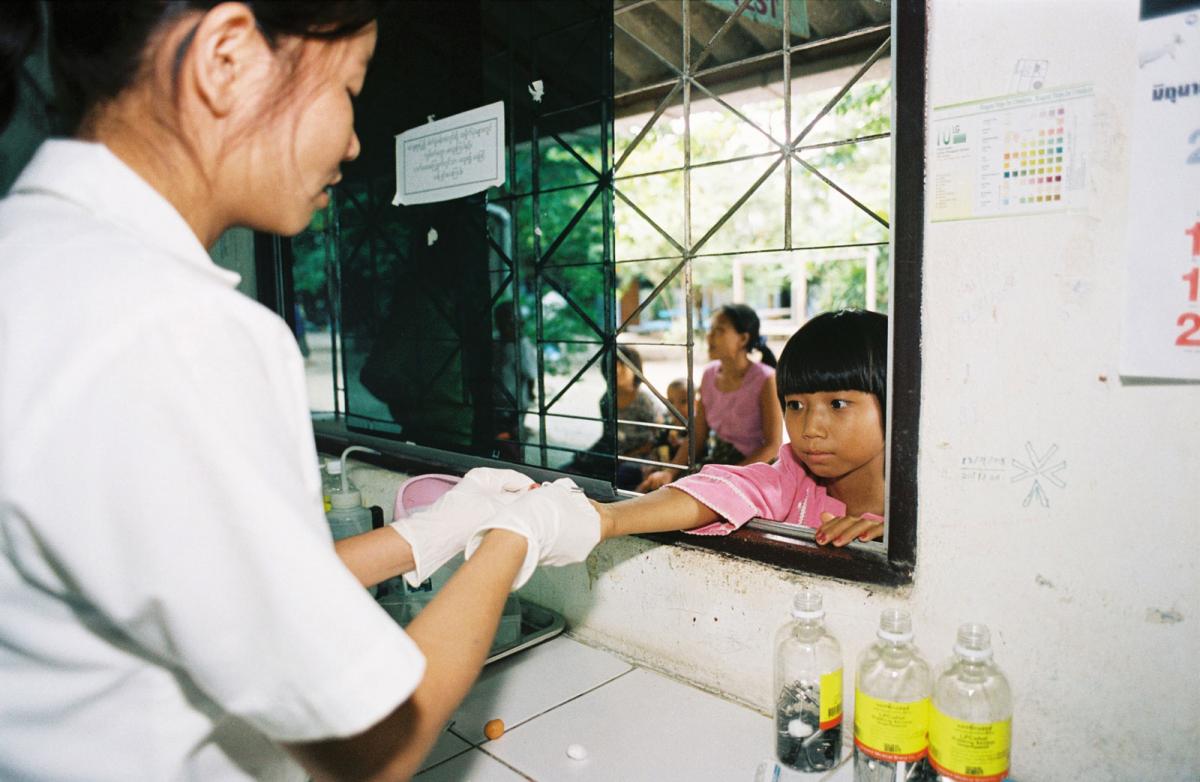 A girl in Northern Thailand is vaccinated at a health center for refugee children from Myanmar, built by WCP Child Rights Hero Cynthia Maung ©WCPF

Article 24: You have the right to the best possible health and to treatment if you get sick

When girls fall ill, they often get worse care than boys, particularly in poor families where the girls also have to work harder. Sometimes, if there isn’t much food, they get less to eat compared with their brothers. Boys living in poverty are vaccinated against serious illnesses more often than girls. In countries where there is a lack of gender equality, more girls die than boys before reaching the age of five. In rich countries it’s the other way round, with more boys dying before the age of five.
All children have the right to feel good and be happy in themselves. However, girls are often pressured more than boys to look and behave in a particular way. It could be anything from how they dress, to their dreams for the future and their interests. Some girls aren’t allowed to use a bicycle, dance or run, just because they are girls. 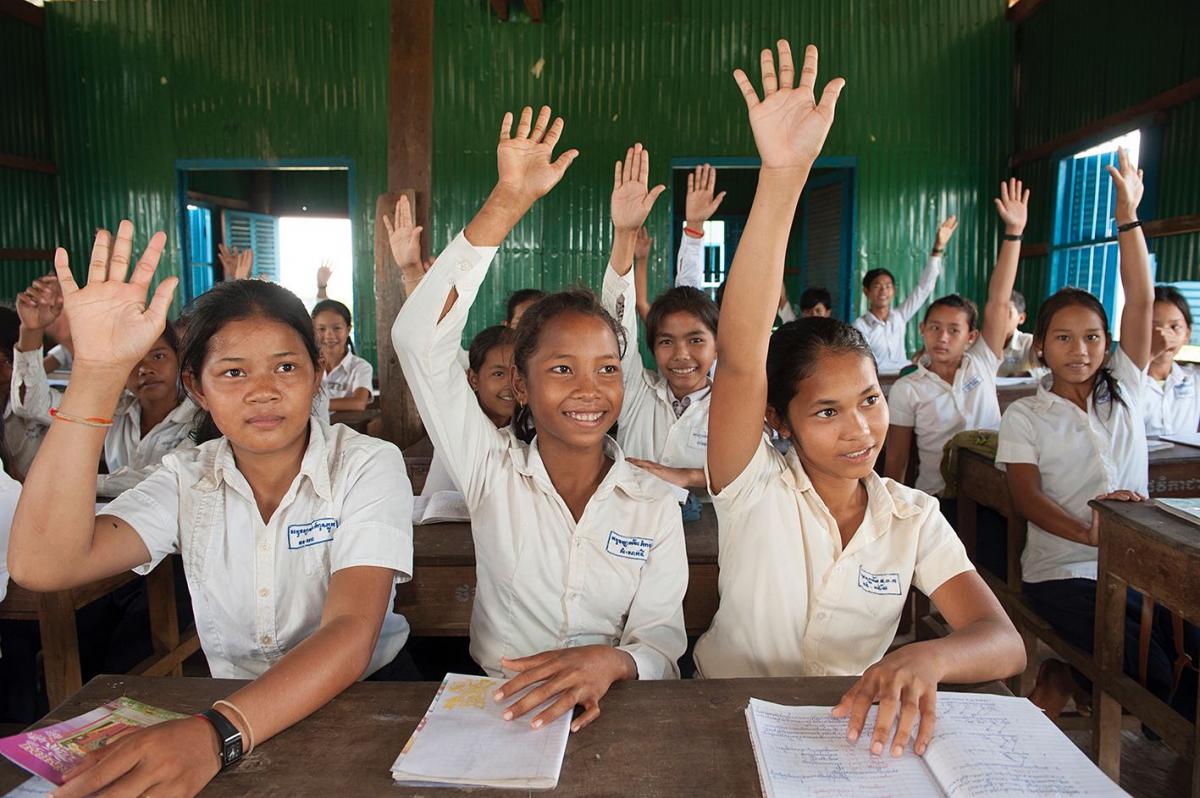 Sacty and her friends go to a village school in Cambodia, built by the organization Room to Read, founded by WCP Child Rights Hero John Wood. ©Kim Naylor/WCPF

Articles 28–29: You have the right to go to school

All children have the right to an education, but more boys than girls get to start school and many girls are forced to quit early. Sometimes it’s because the parents want their daughters to help out at home. Others are worried that men will attack and hurt their daughters on their way to school. Some think that education is wasted on a daughter, because she will belong to another family when she marries. If the school has no separate toilets for girls, many stay home when they start their period. They miss lessons, and those who aren’t able to catch up end up quitting school. Other girls finish because an adult at the school is mistreating them. There are even teachers and head teachers who try to force students to have sex with them by threatening them with low grades and failing them on their exams.
Girls who get an education marry later and have fewer and healthier children. Every extra year a girl attends school increases her future income by up to a fifth! It’s good for her and her family, but also good for the whole country. 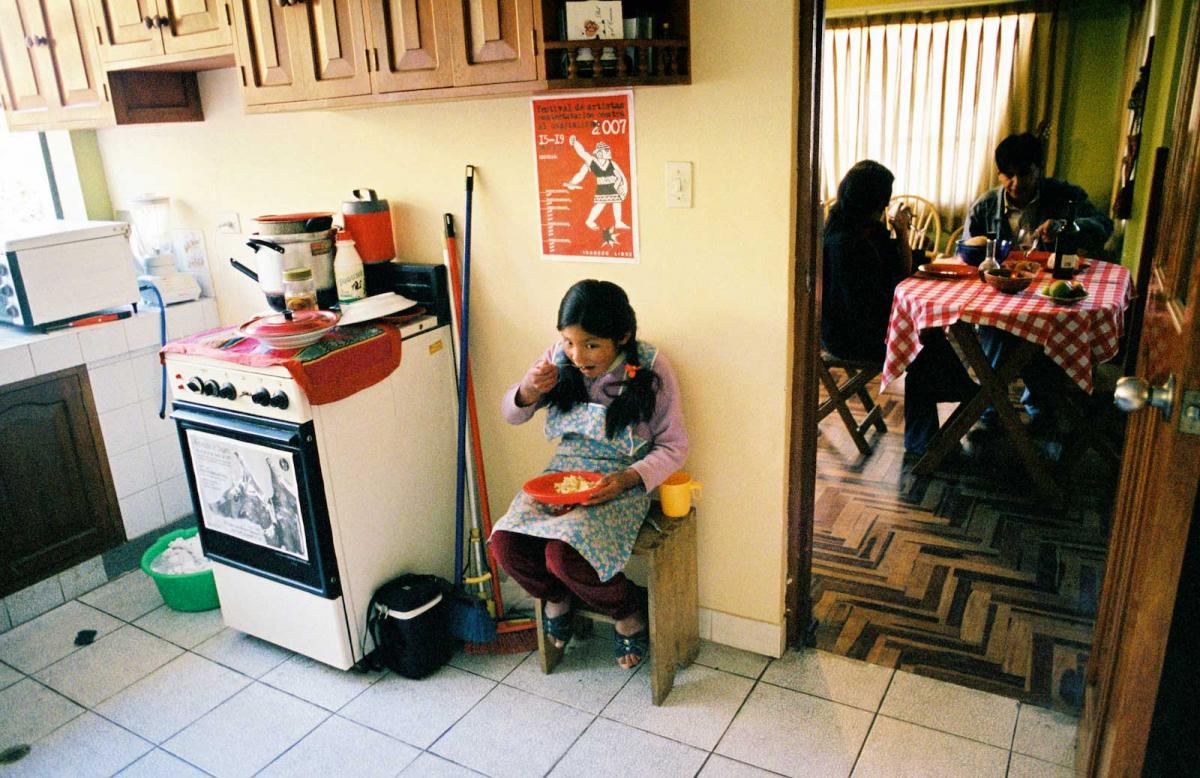 A girl from an indigenous community in Peru has a little time to eat in the kitchen, while her employers have the lunch cooked by her. ©WCPF

Article 32: You have the right to protection from harmful and/or dangerous work

According to the UN Convention on the Rights of the Child, no-one should have to work before the age of 12 and you cannot work long days involving heavy or dangerous tasks under the age of 18. Yet still many children are forced to start working at an early age and carry out tasks that are harmful. Girls often have some of the lowest paid and most dangerous jobs. They do tough labour on farms, in factories, at construction sites and as maids in private homes. Sometimes they don’t even get paid, just a little food. 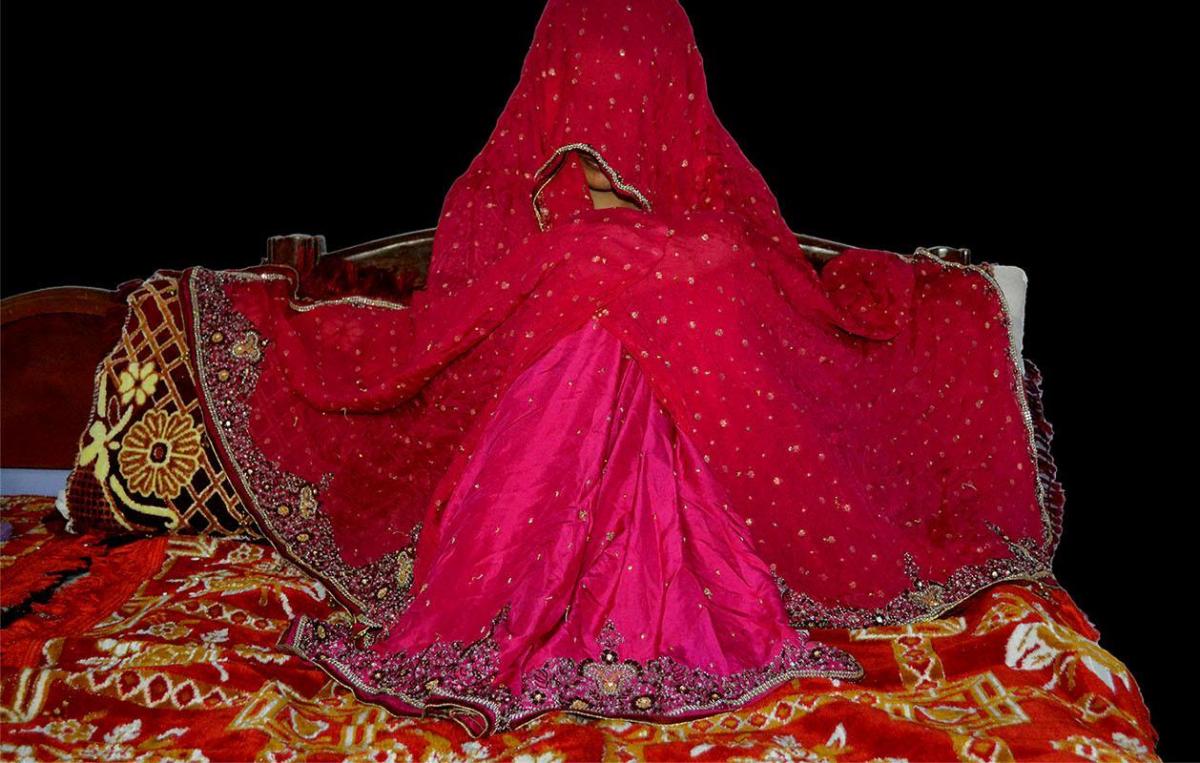 Perween, 11, from Pakistan has been dressed in fine garb and is waiting for her wedding ceremony. Learn more about how and why she was forced to marry. ©Britt-Marie Klang/WCPF

Articles 34–35: You have the right to protection from abuse and abduction and/or being sold

You may not be married off while still a child, that is, under the age of 18. Yet girls, in particular, are still being forced into child marriage. Twelve million girls are married off every year. That’s 23 a minute and almost one girl every other second. Sometimes girls are forced to marry because the family needs the money or the livestock that the husband’s family give in exchange for a wife. It is usually described as trading in children.
Girls who are married off have many of their rights violated. They are often forced to quit school and are much more exposed to violence from their husbands compared to those who marry as adult women. It can also be fatal for a girl to give birth before her body is fully grown. These days, injury during childbirth is the world’s most common cause of death for girls living in poverty between the ages of 15 and 19.

Article 37: No-one may subject you to cruel treatment

No-one has the right to hurt you, even if it is done in the name of old traditions. There are many traditions that are good for both children and adults, but also a lot that are bad. Many of the ancient traditions that harm girls are to do with marriage. For example, some believe that a girl cannot marry unless she has been ‘cut’. The tradition of cutting a girl’s private parts is very painful and can lead to serious infections and injuries that affect her for the rest of her life.

What difference does it make?

Equal rights and opportunities for a decent life are of course really important for every child, girls and boys alike. It is also good for entire communities for girls and women to share the same rights as boys and men. If girls get an education and gender equality improves, it reduces poverty and leads to a better life for everyone. 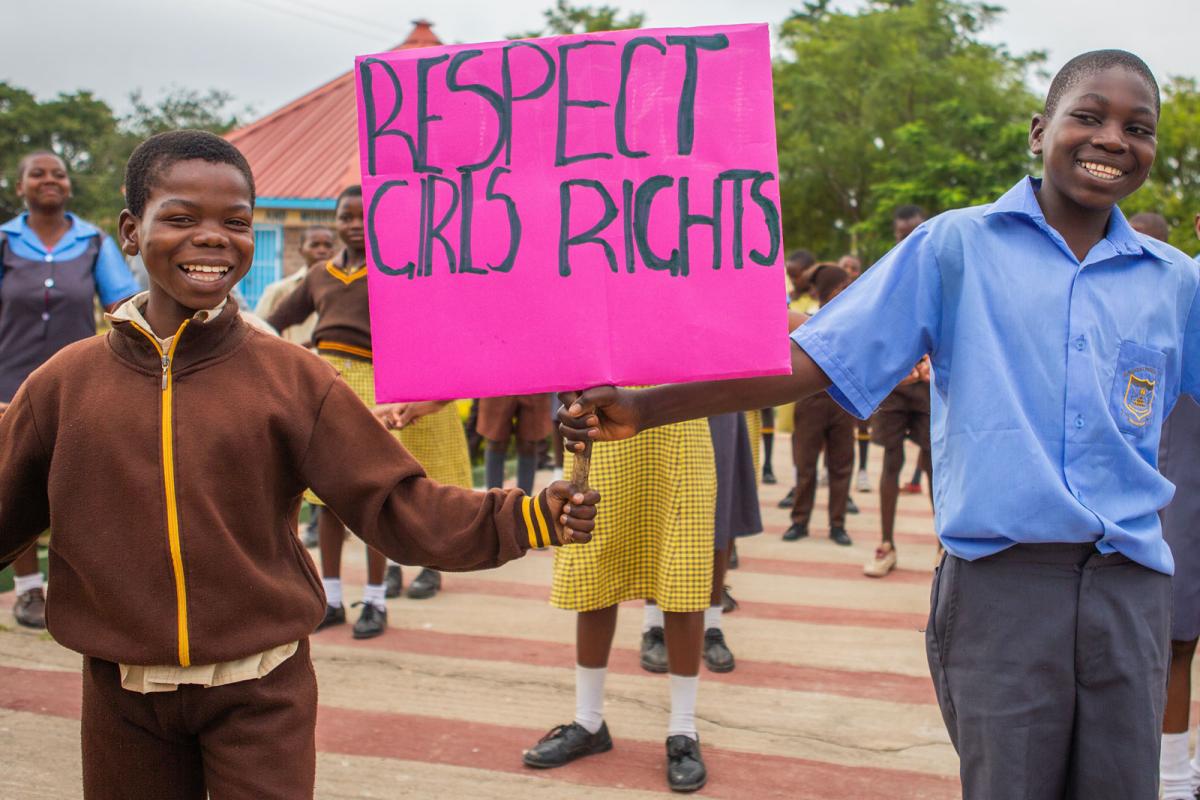 Boys standing up for girls’ rights during the Round the Globe Run for a better world in Zimbabwe. ©Magnus Bergmar/WCPF

Celebrate and stand up for girls’ rights

The United Nations, UN, has established an international day for the girl child, which is celebrated on 11 October every year. You and your friends can organise a demonstration for equal rights for girls, and remind everyone in your community that girls’ rights must be respected! It’s important that girls do not stand alone in their fight for equal rights. Boys also need to bring about change. 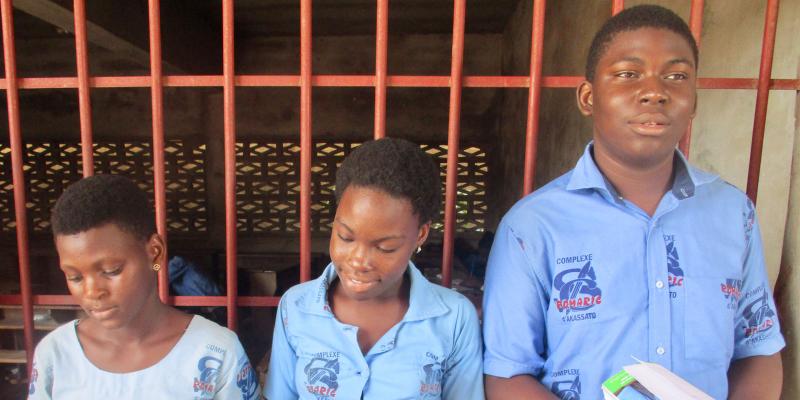 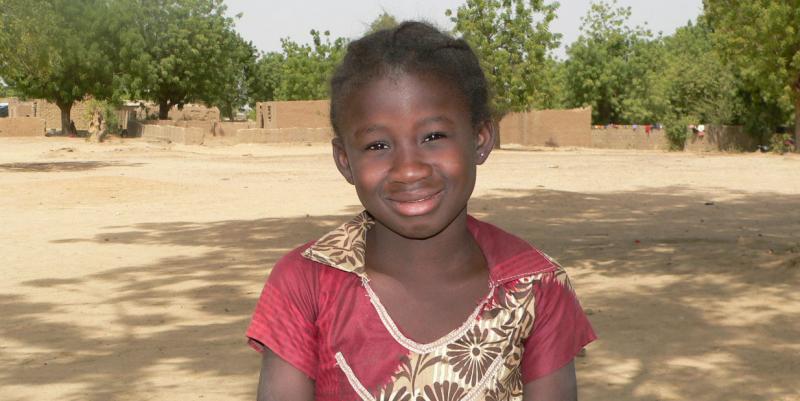 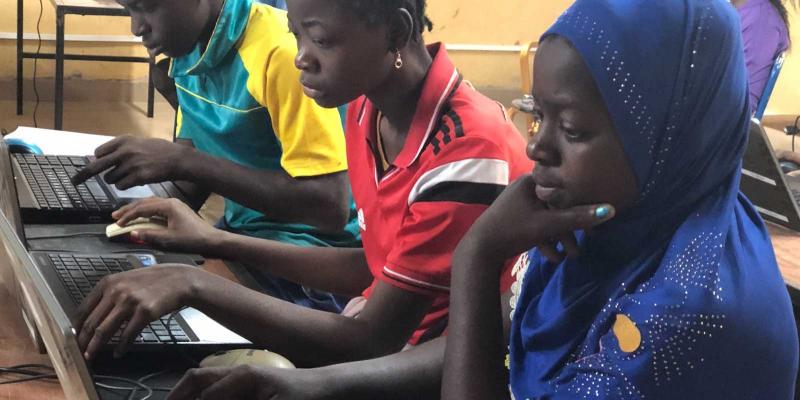 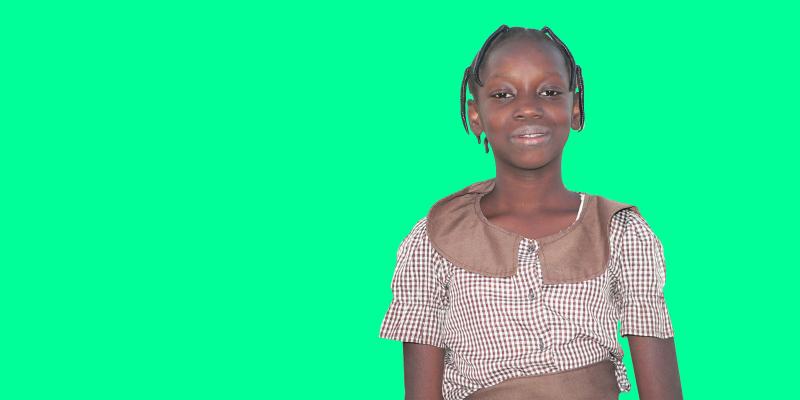 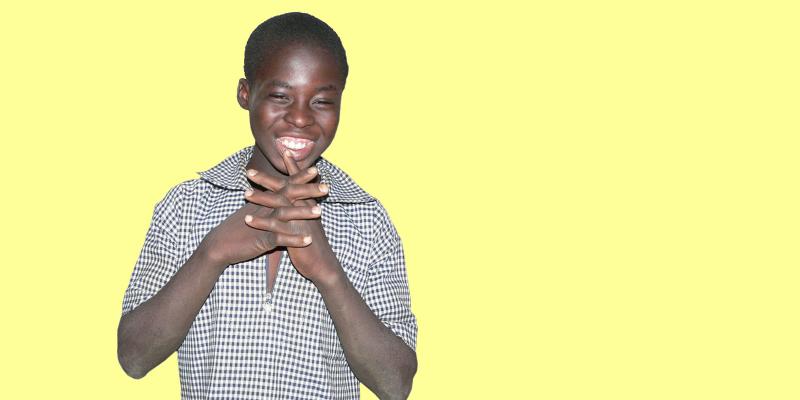 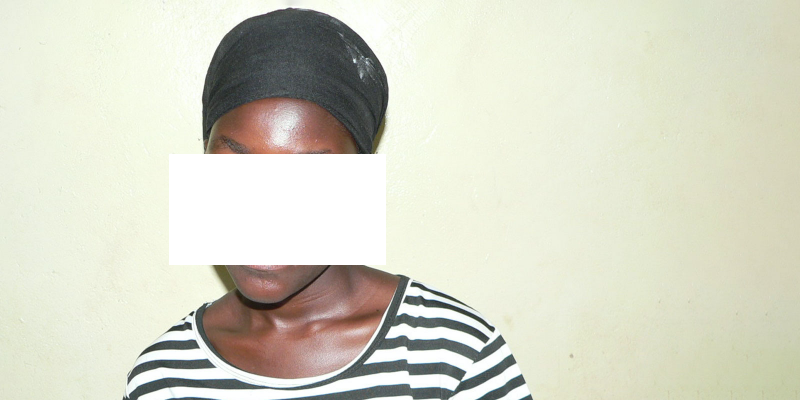 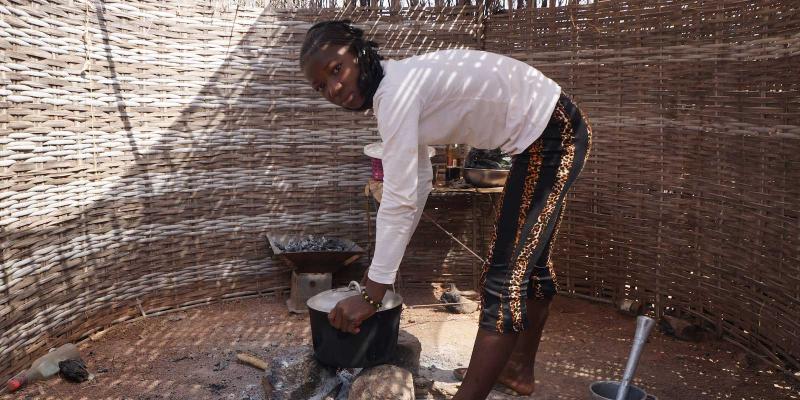 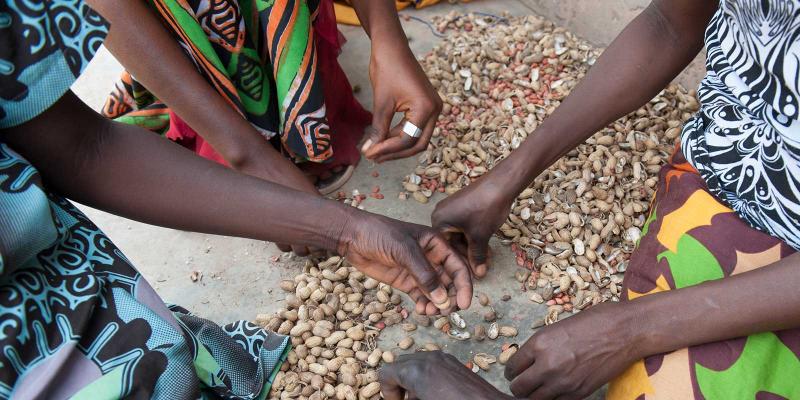 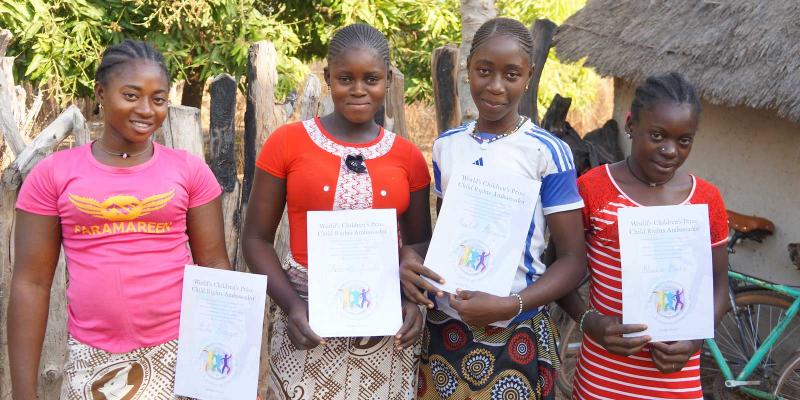 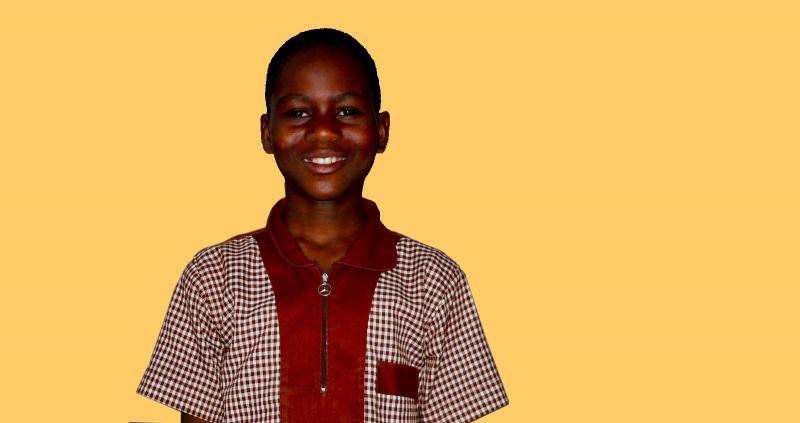 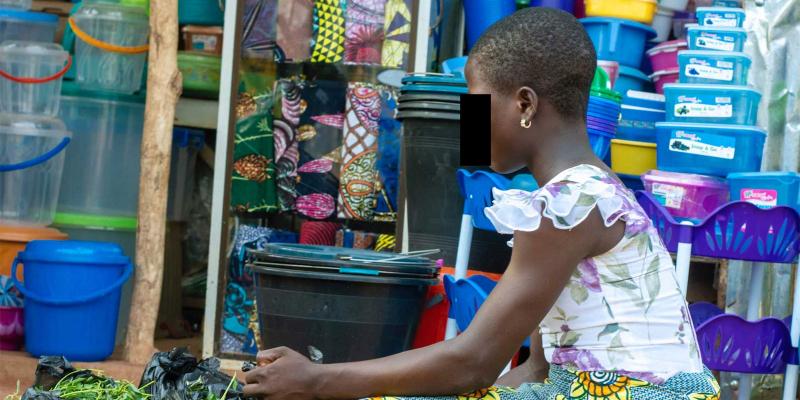 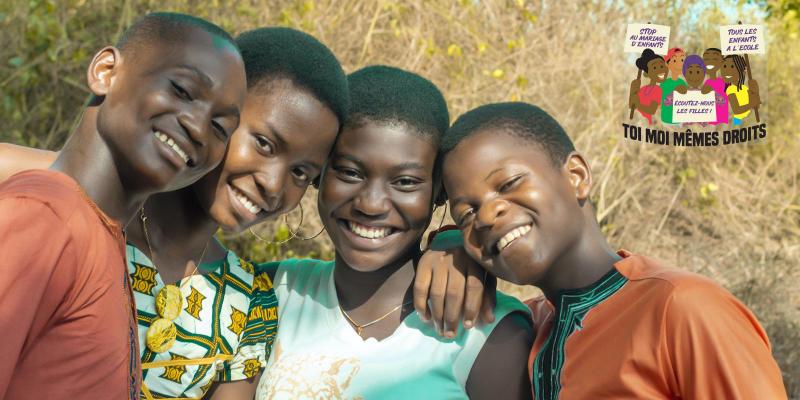