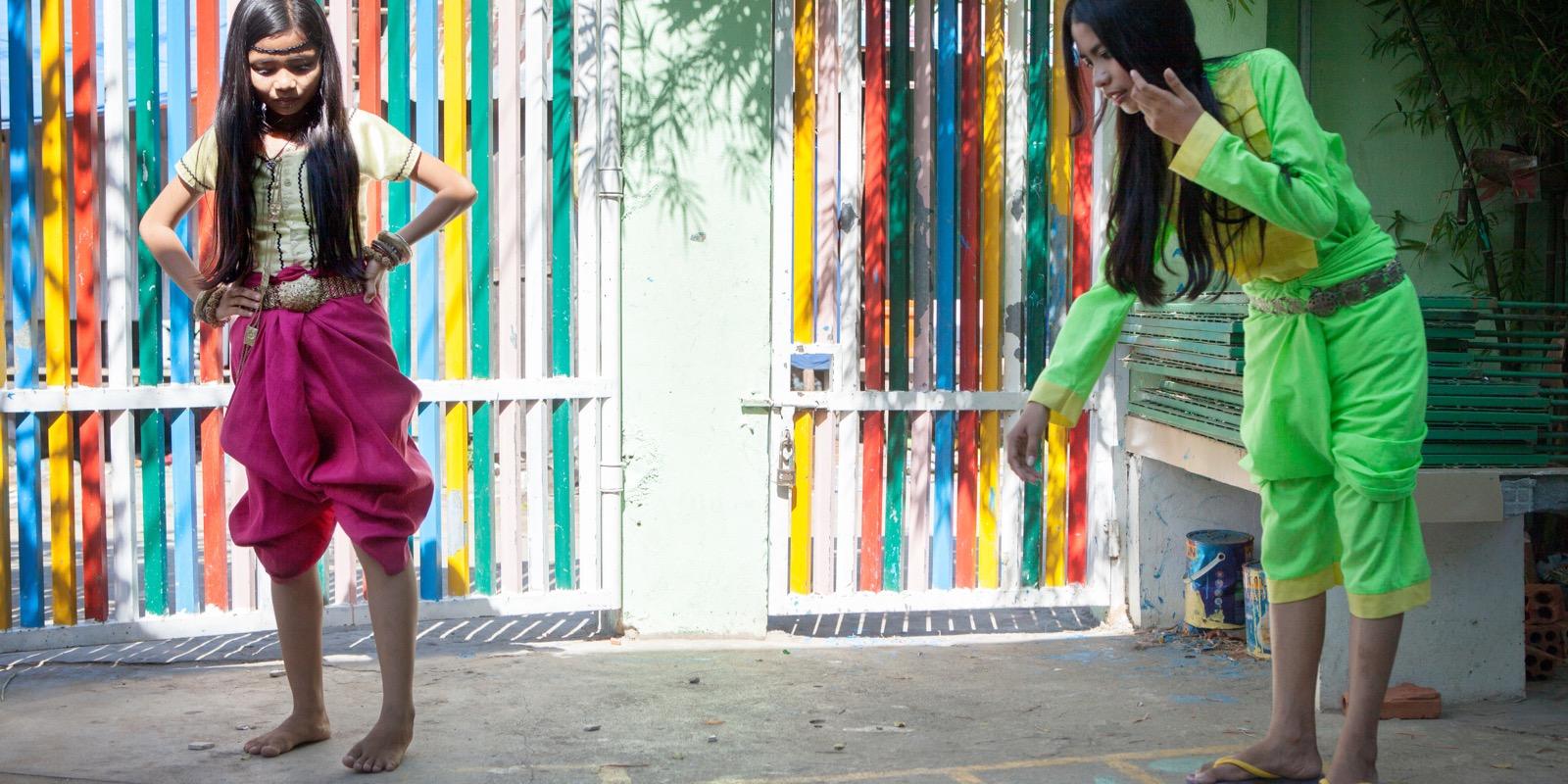 Dangerous work at the garbage dump

Kean fills her sack, piece of plastic by piece of plastic. She stands at the bottom of one of the deep holes on the garbage dump. Suddenly she hears a roaring motor and the rustling noise that can only mean one thing: falling trash! Kean pulls herself up and narrowly manages to escape the avalanche of trash started by the tractor, that fills the hole where she was standing.

A few years earlier, when Kean is eight, she and her younger sister Phally leave their home village in southern Cambodia. They say goodbye to their parents and squeeze into a minibus with their grandmother. After three hours they have reached their destination: the Stung Mean Chey garbage dump in the capital city of Phnom Penh, where they will work from morning till night, every day of the week.

A garbage dump is a dangerous workplace. Kean and Phally soon learn what happens to the children who don’t manage to escape the avalanches of falling trash. The first time Kean sees it, she is a few metres from a boy who is standing further down the side of the garbage dump. The tractor driver on top of the heap doesn’t see them, and shovels garbage right over the boy.

Kean and everyone else who can see the boy disappearing under the trash shout to one another. Adults and children are soon working together to dig him out.

When the boy emerges, Kean sees how he looks terrified. But the next day he’s back on the garbage dump working away as if nothing ever happened. Kean knows that if he wants to be able to eat, he doesn’t have a choice. 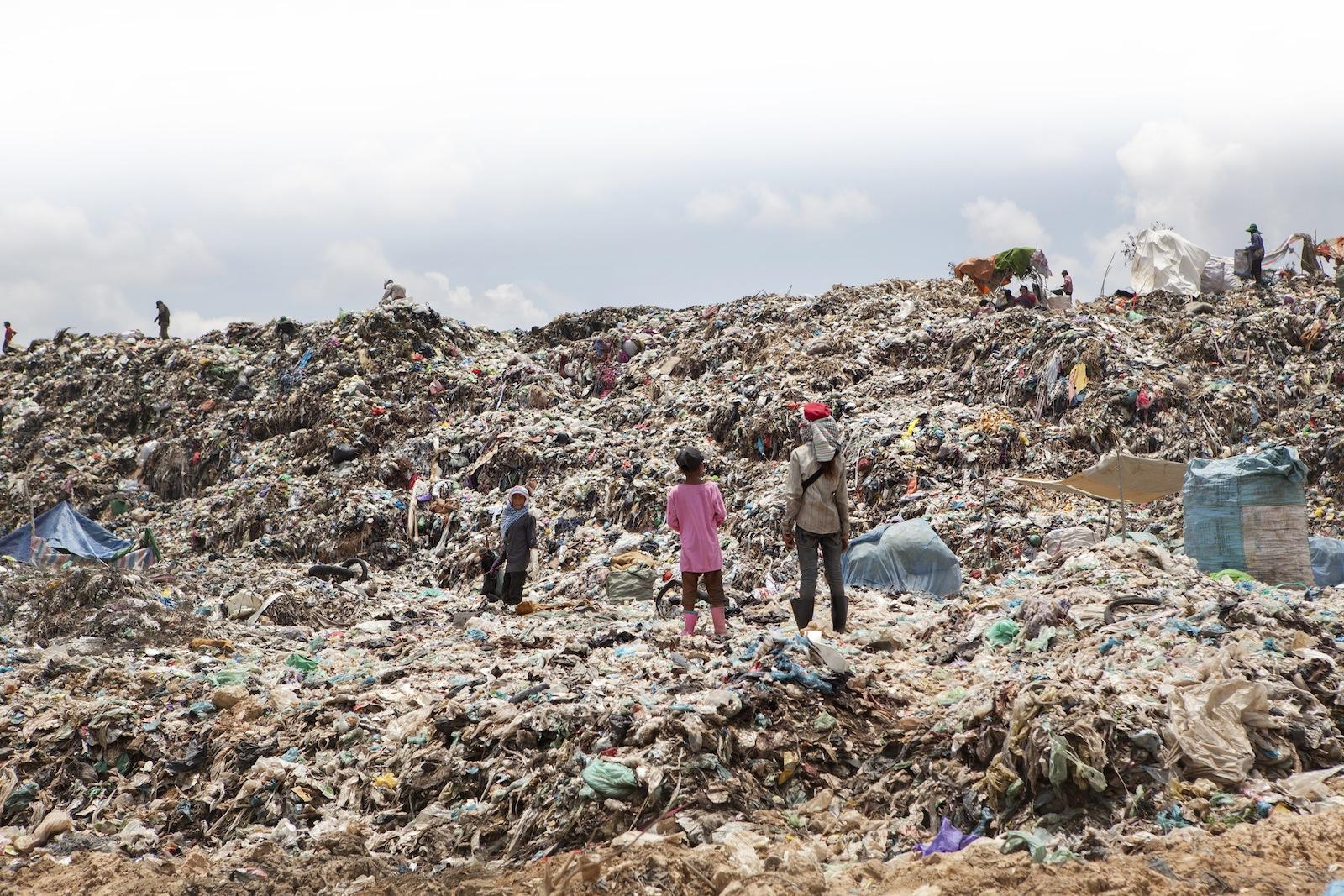 A garbage dump is a dangerous workplace.

Another time, a boy disappears under the trash and only the children notice. They shout for help, and although an adult comes to help eventually, it takes too long to dig the boy out. Later, Kean hears that by the time they found the boy he was dead.

The child in the sack

Kean tries to stay away from the tractors and goes to the burning garbage heap to find iron and other valuable things. But there are other dangers there. Bottles can explode in the fire, sending shards of glass flying. Just walking across the garbage heap is taking your life in your hands. Kean often falls waist-deep into puddles that gather among the trash. It’s impossible to spot them, because the surface is covered in floating plastic bags and other trash, so they blend in. Anyone who falls in a hole like that and goes under will never be found again.

Kean and her sister spend every day looking for trash they can sell. Sometimes they are so hungry that they eat food that others have thrown out. The clothes they wear come from the dump too. Sometimes they find undamaged clothes, that have been thrown out just because they have small stains on them. It makes the sisters angry to think that there are rich people who throw away good clothes and food that is still edible. One day Kean spots something that looks like a good find. Something that she’ll never forget. She has just begun her days’ work when she sees a large black sack. Her first thought is that maybe it’s something she could sell. When she gets closer and grabs the sack she gets a feeling it could be full of meat. She takes her hook and opens the sack. The sight that meets her eyes will stay with her for a long time. There is a dead child in the sack. Kean runs away as fast as she can.

There is dead child in the sack. Kean runs away as fast as she can.

The woman with the school

One day, Kean and Phally see a woman walking around the garbage dump, giving out protective masks and talking to the people who work there.

Kean and Phally each take a mask and listen carefully as the woman talks to them about a school. The children are invited to go with the woman to see the school. Phally has never seen such a big school before. There are new people everywhere, and Phally feels scared. But when Phymean, the woman who brought them there, explains that the school is free for all children, Phally dares to hope that the sisters might be able to go to school.    The sisters tell their grandmother about the school visit.    "Please can we go to school?"    "No," replies their grandmother. "Unless you keep gathering trash we’ll all  starve." 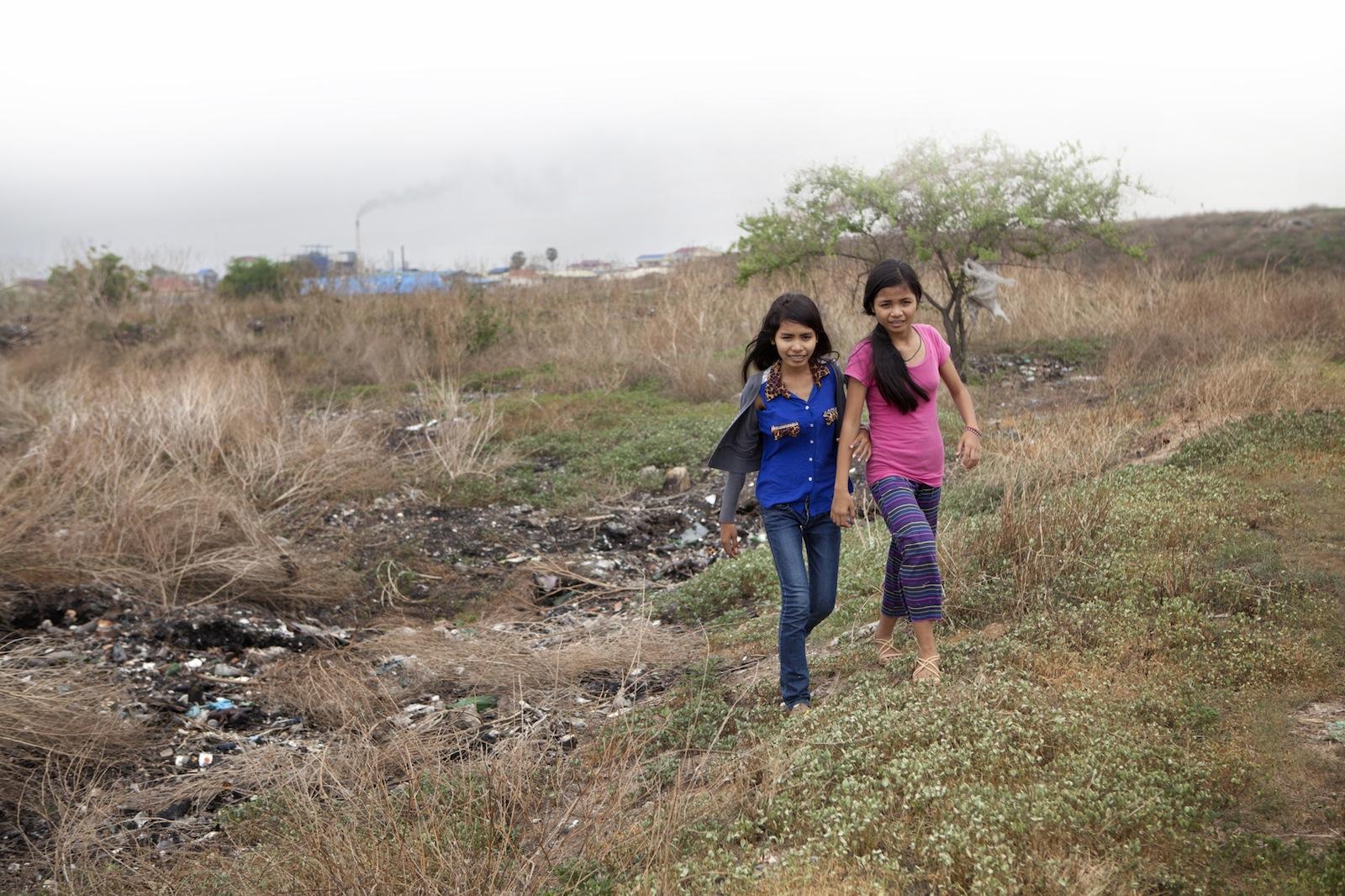 Every day after school, Kean and Phally go back to gather trash.

Phally cries and keeps on pleading with her grand­mother:

"I don’t want to spend my whole life working on a garbage dump!"

Finally, their grandmother gives in. The girls are allowed to start school.

Every day after school, Kean and Phally go back to gather trash. When they get home to their little shack late at night, they do the housework while their grand­mother sorts out the trash. Then they sit down to study. They are afraid of not being able to keep up with the lessons, so they try to learn as much as they can at home.

The sisters’ days are long, and they are exhausted every day. But it’s worth it. Going to school is the best thing that’s ever happened to them.

One day, when Kean gets home from school, her grandmother is coughing worse than usual. She has TB and she is very weak. What’s more, the garbage dump is closing down, and everyone who made their living there is going to have to walk the streets of Phnom Penh. Their grandmother won’t manage that. They have to go home to their village.

Kean and Phally cry the whole way in the minibus. All they want is to stay at school, but their grandmother doesn’t want to leave them there alone.

Back in their home village, they plant rice every waking hour. Kean often cries. She thinks about school, and how many lessons she is missing as the days pass.

Kean and Phally’s family don’t listen to the girls as they argue and plead. So they make a plan: They won’t eat a single thing until they are allowed to go back to Phnom Penh - and school. The sisters’ hunger strike goes on for several days and finally, they get their way. They hold one another’s hand and jump for joy. They are so happy. And so hungry! 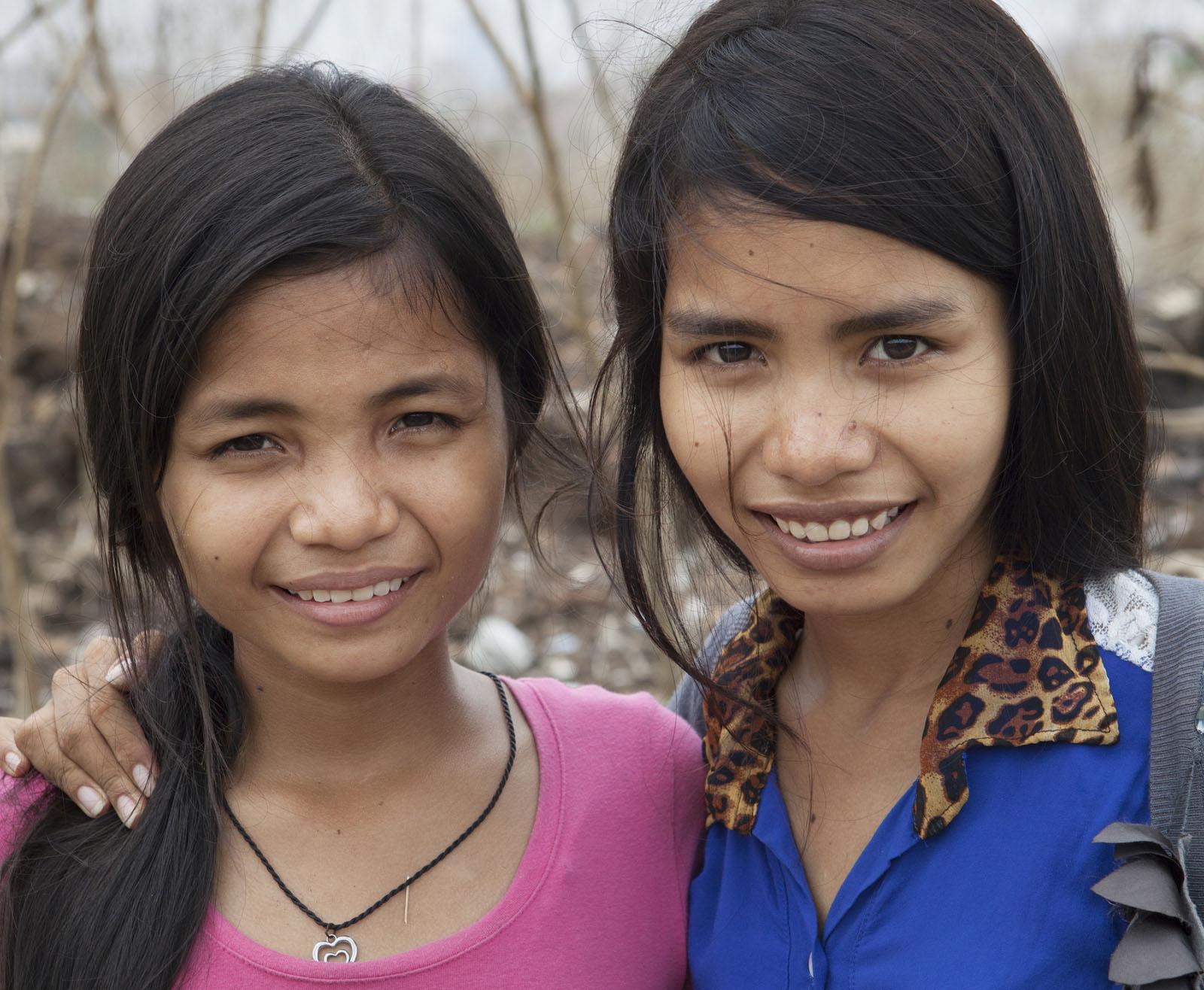 Kean, 14
Best moment: When my grandmother said we could start school.
Worst moment: When she said we had to stop school.
Likes: Embroidery and dancing.
Afraid of: The part of the dump where the most people have died - there could be ghosts there.

Phally,13
Curious about: Snow.
Misses: My grandmother, who is dead now.
Happy about: Being able to go to school.
Likes: Talking to new people.
Favourite colour: Yellow. 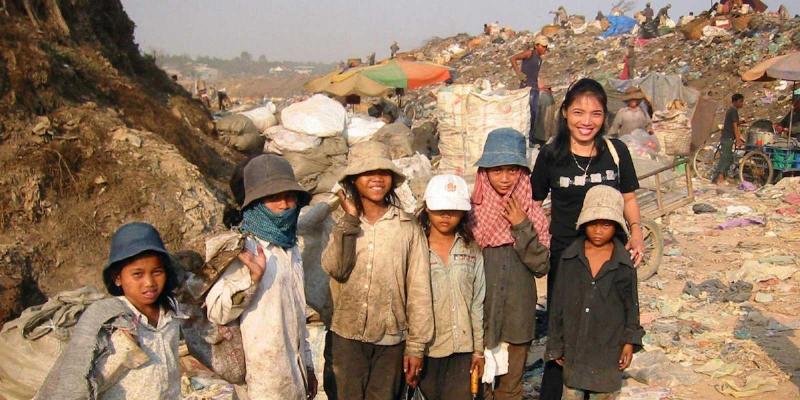 The stench of garbage makes Phymean feel sick the first time she visits the children on the garbage dump in Cambodia’s capital city, Phnom Penh. 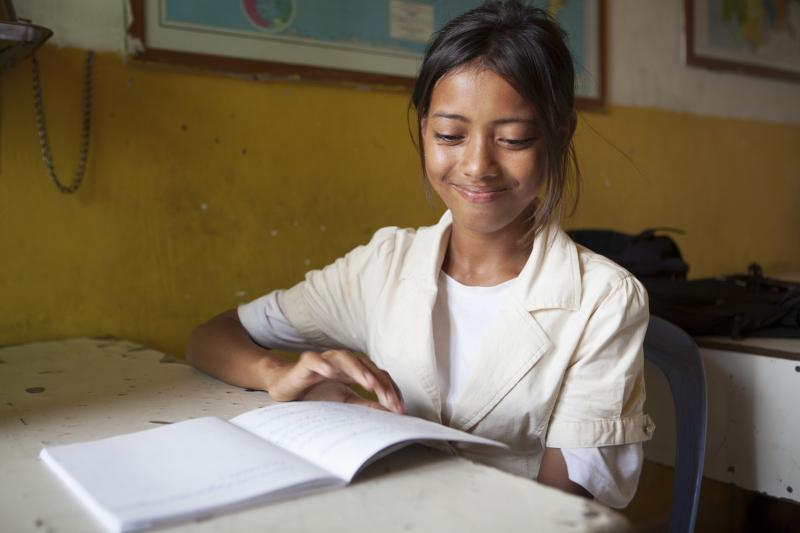 The temperature is 40 degrees and there is no shade at the dump. 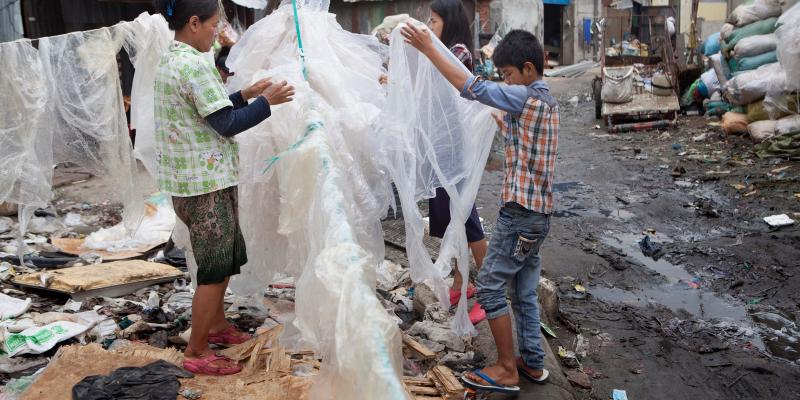 Pha and Sinet go to the PIO school. 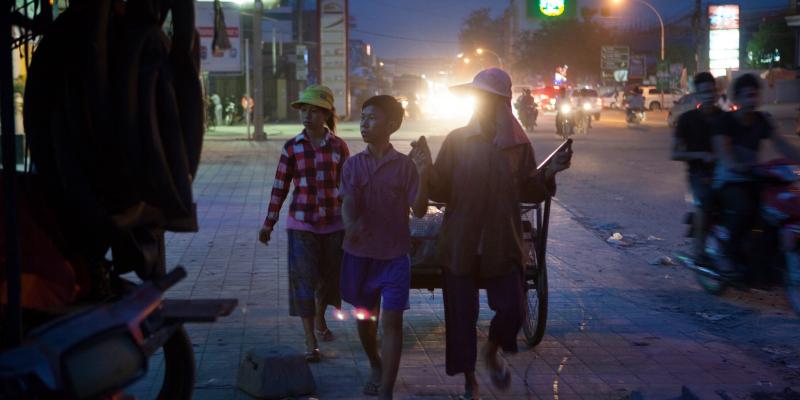 A long day for Langeng

Langeng, 15, lives with his sister Pich, 13, his mother and 17 relatives in a shack beside the old garbage dump.

Srey Kong has painted her family’s life at the garbage dump in Stung Meanchey on the wall of the school. 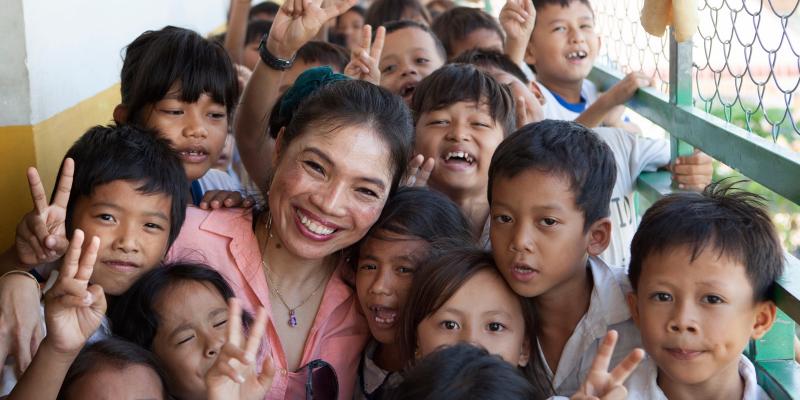 Phymean Noun grew up during the genocide in Cambodia.
WORLD'S CHILDRENS PRIZE FOUNDATION