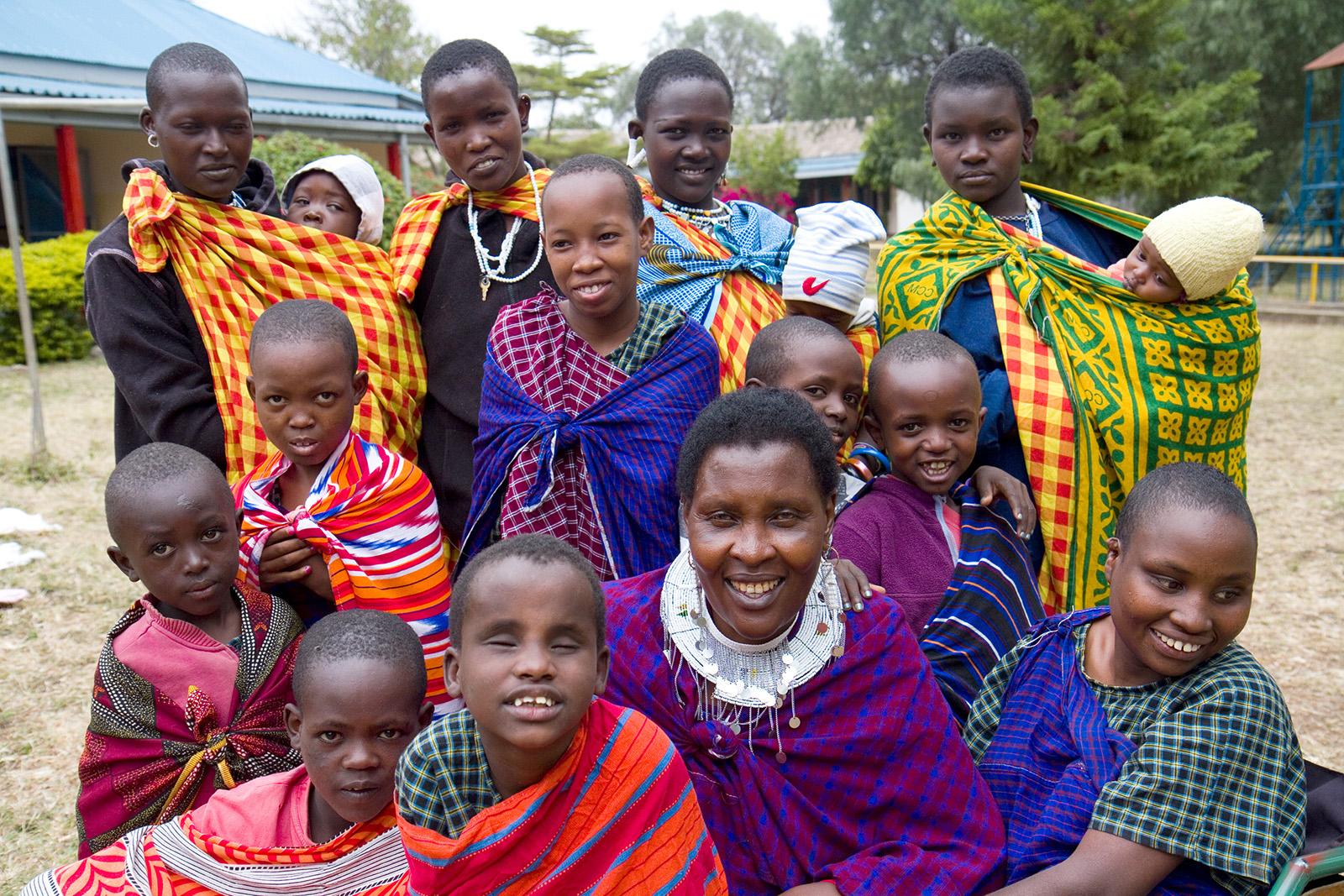 Anna Mollel first experienced how difficult life could be for differently abled children in the Maasai villages of northern Tanzania when she was just six years old. Many years later, Anna arrived at what she thought was a completely empty village. But on the floor of a house, she found an abandoned eight-year-old girl, Naimyakwa, who was unable to move and who would have died had Anna not come and saved her.

Anna, who belongs to the Maasai people, was six years old and playing with her friends in the neighbouring village when she heard a noise coming from inside one of the houses.
“I asked my friend what it was. She said it was her sister, who wasn’t allowed outside. Their mum didn’t want anyone to know they had a daughter who ‘wasn’t quite right’.
“I went into the house and there was a little girl lying there. She smiled when she saw me,” recalls Anna.

Anna helped the girl to sit up and they started playing. The girl, Nauri, was happy to finally have some company. The next day, Anna returned when Nauri’s mum was fetching water.
“We lost track of time. Suddenly Nauri’s mum rushed in and hit me with a cane. She shouted that I was never to set foot in their home again.”
But Anna came back the next day.
“The other children were afraid, but I said that everyone needs friends and that Nauri was no exception.”
Anna managed to convince the others. They took turns to keep watch while the others played, and when the lookout called that her mum was on her way, everyone rushed out. After a few days, Anna helped Nauri to stand up and they practiced walking. Soon Nauri was able to join the others and play. A few weeks later, Nauri’s mum came round to Anna’s.
“She said that she knew what I was up to and that she wanted me to carry on! Nauri had never felt so good and it was a miracle that she was now able to both walk and run.” Anna asked whether Nauri could start school, but her mum would not agree to it.
“So I started going back to Nauri’s every day after school and teaching her what I’d learned that day. I became the only teacher she ever had.” 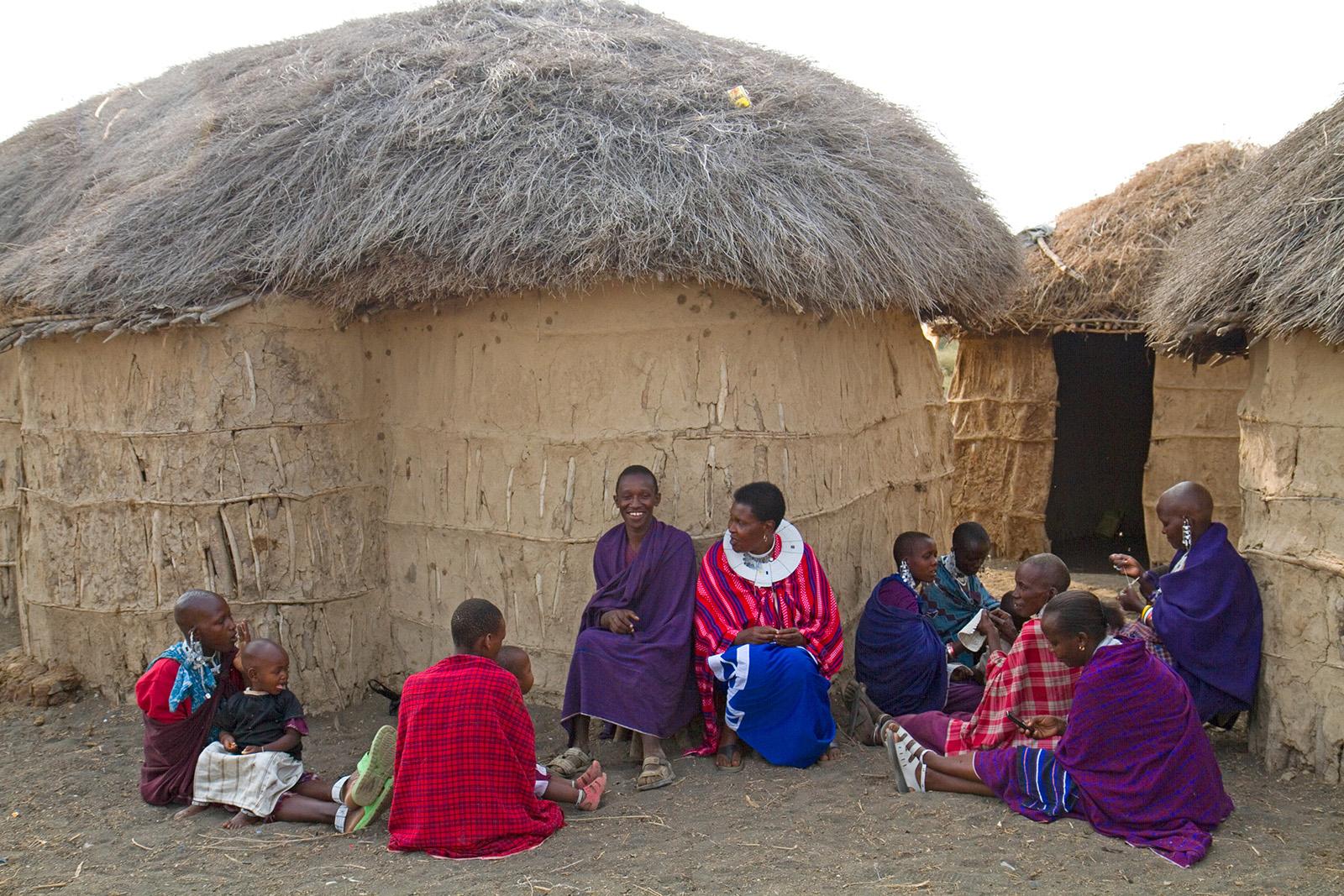 Back to the village – “Our aim is always for the children to return to their village and live their lives like the rest of the family. For them to go to school with the other children and be a part of the community,” says Anna.

Anna trained to be a nurse. One day, a German woman came and wanted to talk to her.
“She knew I was Maasai, and she wanted to find out more about children with disabilities in our villages. I explained that it used to be common for children to be killed or abandoned after being born. People thought the disability was a punishment for something they’d done. But I went on to say that the biggest reason was that the Maasai are herders who walk long distances across the savannah in order to survive, looking for fresh grazing areas for their animals. A child who was unable to move was seen as a major hindrance for the entire group. I explained that these children were still having their rights violated. That they were hidden away, didn’t have access to the treatment they needed and weren’t allowed to go to school or play.”
The German woman asked Anna if she would be interested in helping start up a project for children with disabilities out in the Maasai villages, which would be called Huduma ya Walemavu (Care for the Disabled).
“I immediately said yes. This was what I’d been waiting for! Now I could hopefully do more for children with disabilities than I was able to do for Nauri when I was little.”

Refused to give up

Anna began driving round the villages in 1990, talking about the rights of children with disabilities. At the same time, she looked for children who needed help. One of the first children she came across was Paulina, 15, who had lost her parents and was disabled as a result of polio. She had to drag herself across the ground. Anna thought it would be easy to convince the village leaders that Paulina could have a good life if she could only have the right operation. But Anna was wrong.
“They didn’t know that children with disabilities could have operations and get better, and they didn’t believe me. Because they lived a long way from hospitals and they couldn’t read or afford a radio, they had never found these things out. They thought it would be money wasted. These children would still never be able to help with the livestock or go to school.
“But my biggest problem was that I was a woman. In our society, women basically have no voice, so they didn’t take me seriously.”
But Anna refused to give in. Just like as a six-year-old she had challenged Nauri’s mum, she now challenged the village leaders. The journey to the village took four hours, but over two weeks Anna travelled there five times! At every meeting she explained about children’s rights, and that they had managed to arrange a free operation for Paulina. Finally she managed to convince the men. 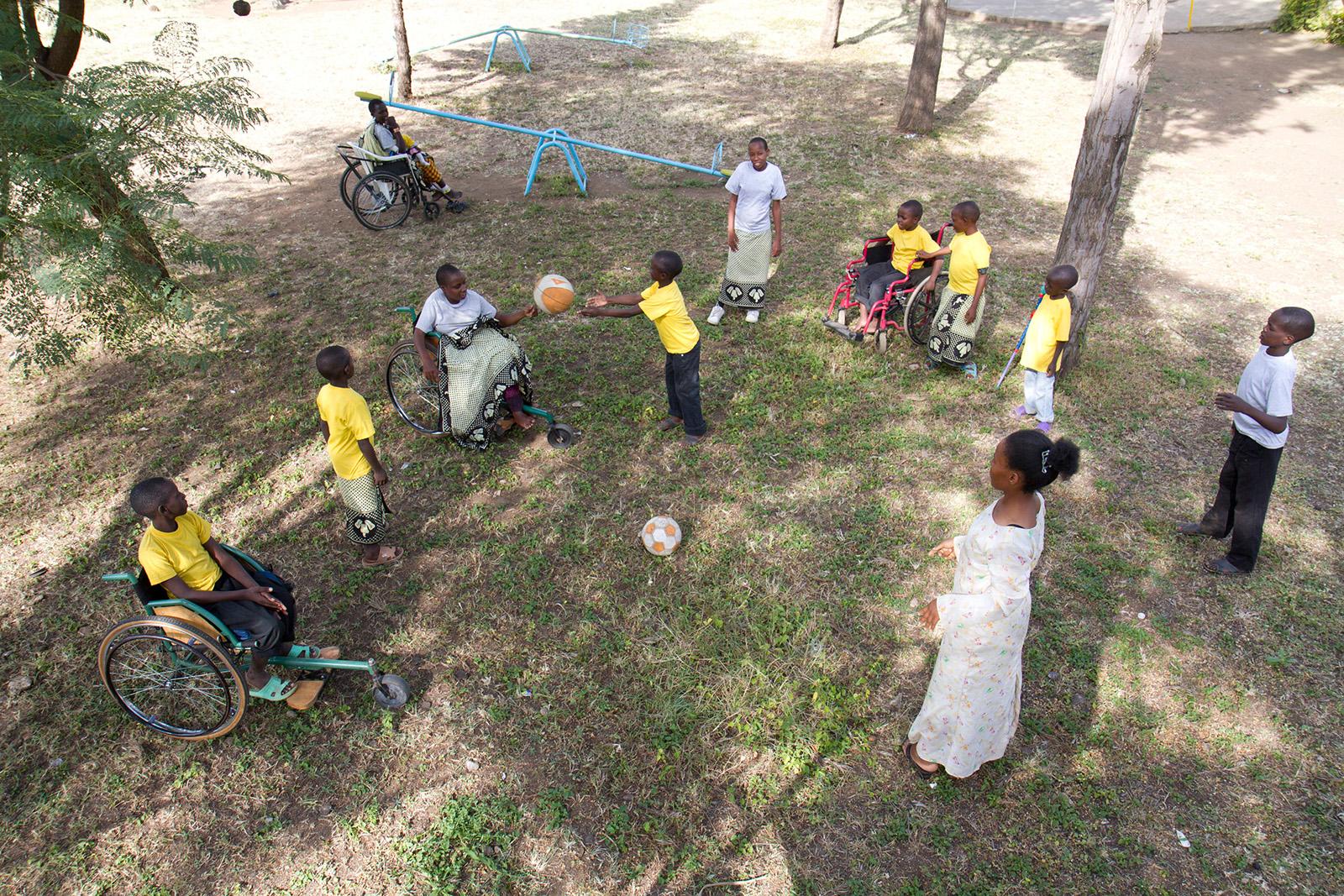 Play is important! – “Being left alone and excluded is the worst thing a child can experience. That’s why play and being with others is so important for us at the center,” says Anna.

After her operation, Paulina started practising sitting and standing. After a few weeks, she began learning to walk with crutches.
“She was overjoyed, and I was too! When Paulina went home three months later, and was able to walk into the village herself, people cried with happiness!” Although Anna was happy that Paulina could walk, she knew that Paulina needed an education if she was to be able to support herself in the future.
“Paulina wanted to be a seamstress, so we helped her start a course. She was really good at it!”
Rumours of Paulina spread to other villages. People started openly talking about their children with disabilities, and they wanted help. Anna travelled to reach children in remote villages who needed help. On each trip she met more and more children.
“In 1998, our own center in Monduli was ready. We employed physiotherapists and nurses. But also teachers, because I knew that the children we helped almost never got to go to school. There were places for 30 children, but there were times when we had 200 children living there at the same time.
“Even if we didn’t have room, we took in every child. The families were so poor that they couldn’t pay for the children to be with us, but we never sent anyone away.”
It’s now almost 30 years since Anna helped Paulina, and since then some 15,000 children have been given a better life thanks to Anna and Huduma ya Walemavu. 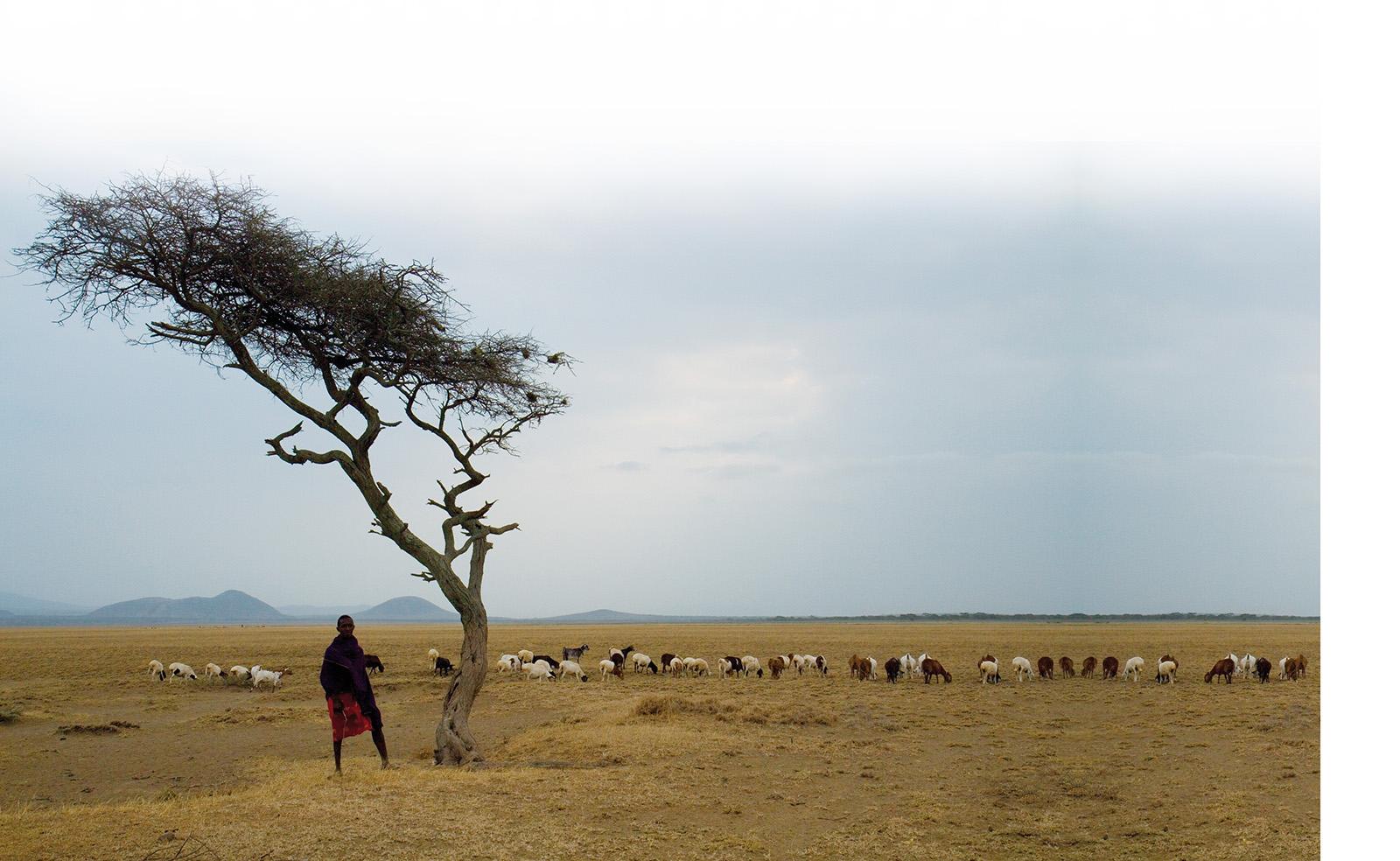 The Maasai are herders. There are around a million Maasai, half of them in Tanzania and half in Kenya. Since the beginning of the 20th century, the areas of land traditionally used by the Maasai as pasture for their livestock have shrunk. The authorities have made large areas of Maasai land available to private individuals and companies for farming, private hunting grounds and national parks for wild animals.
In 2009, riot police burned down eight Maasai villages in northern Tanzania because the land was to be used by a private hunting company and tourists wanting to hunt big game there. People were driven from their homes, and over 3,000 men, women and children were made homeless. The Maasai who continued to let their livestock graze in the fertile area were put in prison.

“At first we were only working with Maasai children, but now we look after any child who needs our help, whatever their ethnic group or religion. We have Muslims and Christians here, and children who have fled war in our neighbouring countries. The fight for children’s rights has no borders!” says Anna. 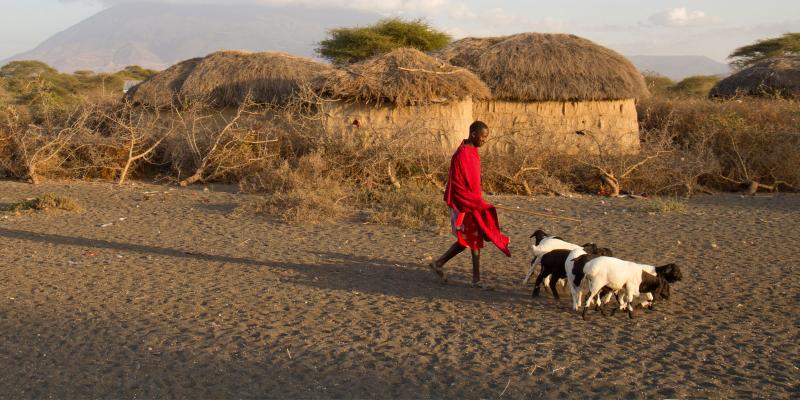 Lomniaki was born with his legs bending the wrong way. 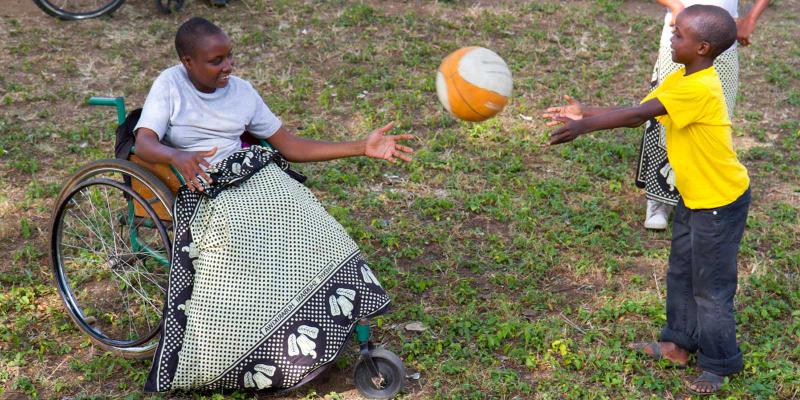 What does it mean to be differently abled?

Over the years, many different words have been used about people with disabilities, words that often make people feel they are worth less than others. 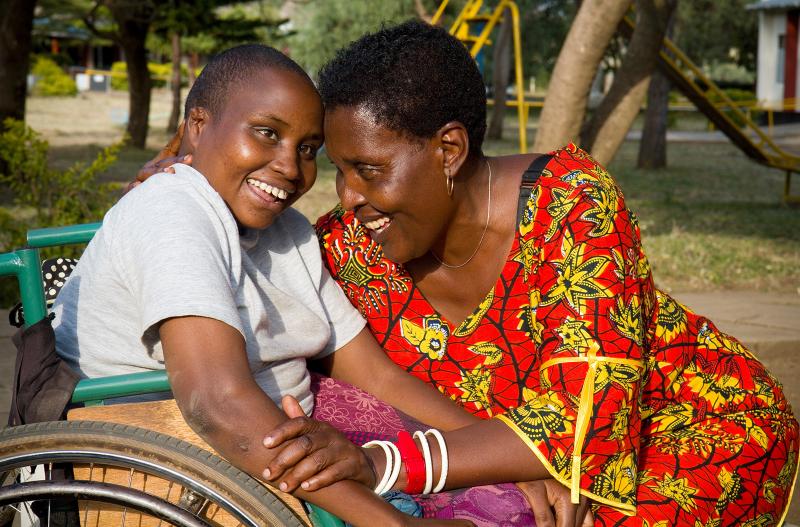 “When I found Naimyakwa alone in the abandoned village she was eight years old and lying on the floor in one of the houses. 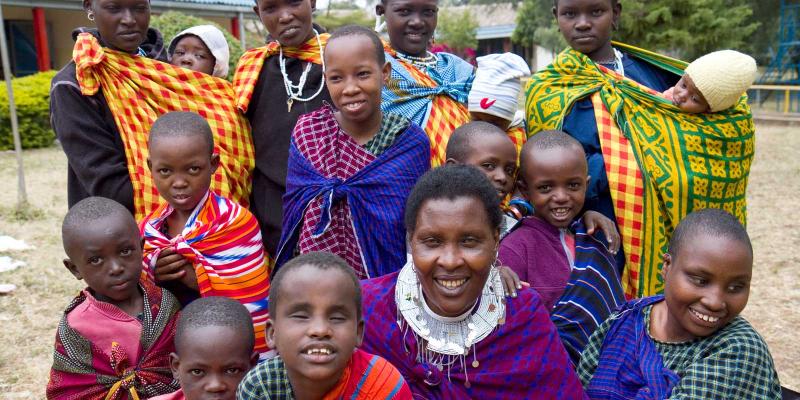 Anna Mollel has been nominated to become the WCP Decade Child Rights Hero 2020, for her fight for differently abled Maasai children and other children living in poverty in rural areas of northern Tanzania.
WORLD'S CHILDRENS PRIZE FOUNDATION