Francis was forced to be a child soldier

When he was 14, Francis was kidnapped and forced to be a child soldier. He learned to kill, and lived a terrible life. But when he heard Kimmie Weeks on the radio, he started to dream of an end to his time as a soldier.

Early one morning our village is attacked. We hear gunfire from all around us, and people run in all directions to get away. Grenades explode. Some hit houses, which go up in flames. Suddenly I realise I’ve lost my family, and run out onto the road with many others who are trying to flee. “The rebels have set up a checkpoint, guarded by boy soldiers. Some of them look younger than me. They are wearing all manner of strange clothes. One wears a white dress, another a suit that is much too big. They have magic amulets round their necks, grenades and ammunition over their shoulders, scary tattoos on their arms and war paint on their faces. There are skulls hanging on poles. They fire shots into the air to scare us. ‘Line up! Boys on the right! Girls on the left!’

“Anyone who doesn’t obey them straight away is shot. Panic spreads. People scream and weep in despair when they see what is happening to the people around them. ‘You there,’ shouts one of the boy soldiers, pointing at me in the line of boys. ‘Take this case of ammunition. You’re going to carry it for me. Move it!’ “I didn’t know then that this was the beginning of a living nightmare.”

Became inhuman
“I was forced to jog with the heavy ammunition case on my head. If I wasn’t fast enough, the rebels shot at the ground beside my feet. Eventually we arrived at the rebel camp. “I had to learn how to handle an automatic rifle. At that point I stopped being a human being, even though I had grown up as a normal boy. I learned to kill, as an obedient soldier. “We child soldiers were always sent out in the front line. They gave us drugs to make us brave. We didn’t know what we were doing.

The peace ambassador
“Things carried on like that for what seemed like an eternity. But one day, sitting in the camp with the other child soldiers, cleaning my weapon, I hear a young  man talking about the war on the radio, in a completely different way to anything I’ve heard before. He says that we child soldiers have been tricked. That the rebels are exploiting us. He also says that it is against the law to use children as soldiers, and that all child soldiers must be allowed to leave the fighting. It was the voice of Kimmie Weeks.

“I think about it and realise that what he is saying is true.

“I started to dream about an end to my life as a soldier.

When Francis fled, armed child soldiers had set up a roadblock. Francis was forced to join them and become a child soldier himself. 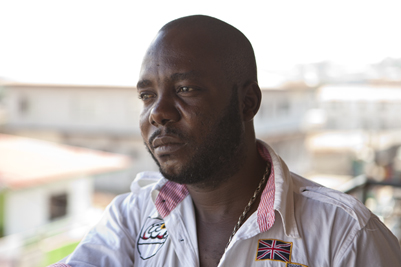