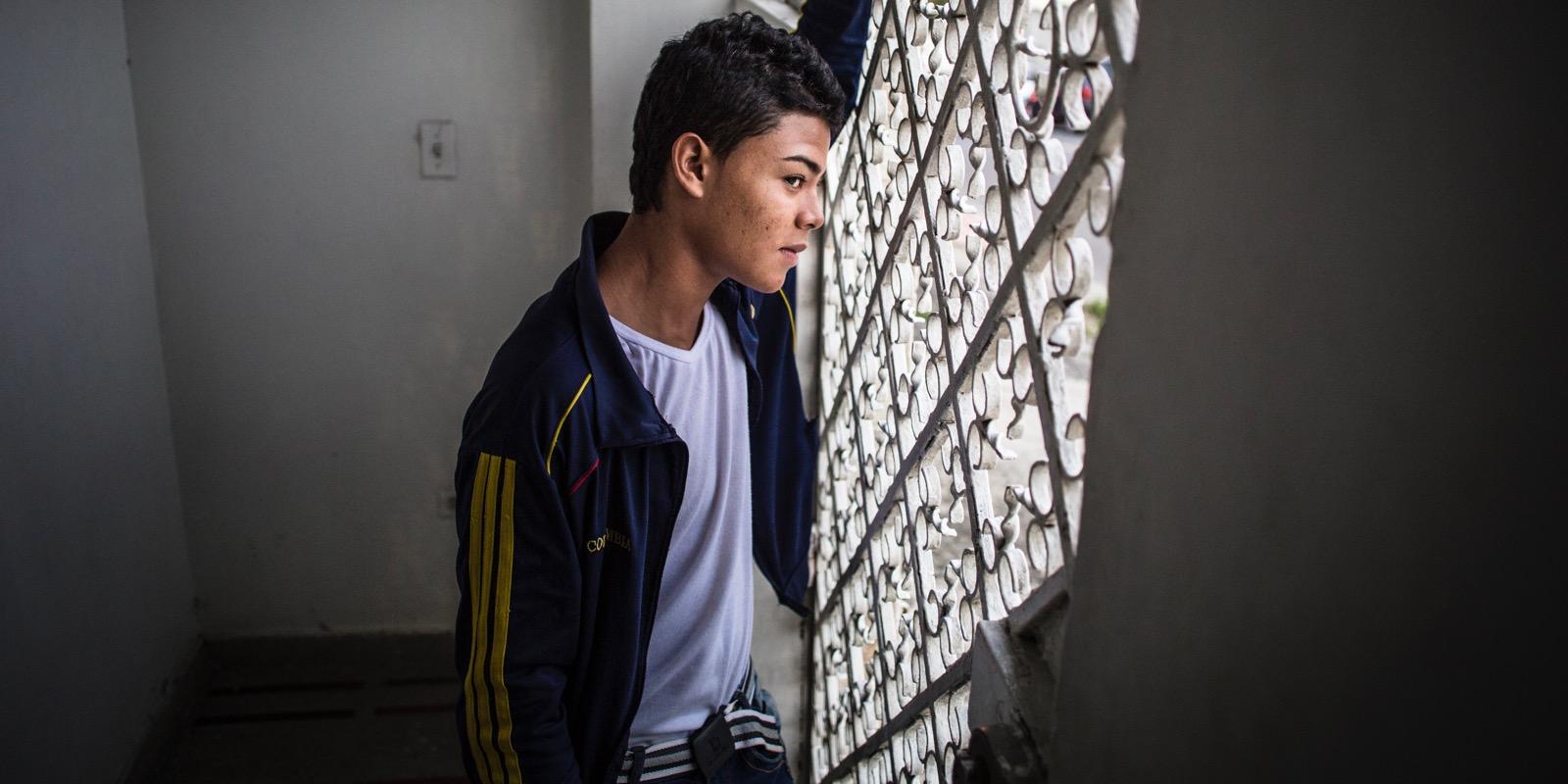 Tricked into becoming
a child soldier

Bullets whistle through the air. The soldiers are shouting and Marlon’s friends run for it. He doesn’t know if he’s killed a soldier. It’s probably safest to run, he thinks. Then he thinks again. If he surrenders, then the war’s over as far as he’s concerned. He’s got nothing to lose.

One day, two men come knocking on Marlon’s door. His mum isn’t home. She works at a mine out in the countryside. Marlon’s younger sisters Sofia and Rosanna are at school.
“Are you Marlon?” ask the men.
“Yes,” says Marlon.
“We’ve heard you’re looking for a job. You want to help your mum and earn a bit of money, right?” say the men.
“That’s right,” replies Marlon.
The men say they have a job for him.
“You’ll get two dollars now and then more later, OK?” ask the men.
Marlon hesitates. Two dollars will buy 1.5 kilos of rice. That’s a lot of food.
“You’ll get a weapon too,” say the men.

Up in the mountains
Marlon’s dad was shot when Marlon was little. His uncle has been in the paramilitary groups: men and women who fought against guerrilla fighters for the government. Sometimes they helped the military.
Marlon has always wished he could also have a weapon. And he wants a motorbike. Just imagine having a job where he got to earn money and carry a weapon. He says yes to the men.
He gets into their car. They drive out of town, out into the countryside and up into the mountains. When they arrive, they are in a military camp, except everyone is wearing different uniforms and carrying different weapons. And it looks like they’re hiding. The military doesn’t do that.
Marlon soon realises that the men are members of an armed group. Many of the members have been in the paramilitary like Marlon’s uncle. Several years ago they were given money by the government to hand in their weapons, but some were drawn back to life in the paramilitary.
The paramilitary say they are protecting people. But if people don’t pay for protection, they get beaten up or killed. So really, they are criminals.

Becomes a child soldier
Marlon is given a rifle and a pistol, uniform and boots. The men teach him how to shoot and how to stay undercover in the forest. He gets food and the men say he’ll get money later.
After a month, Marlon joins a patrol with six others.
They each have a different job to do. Marlon has to carry lots of equipment and heavy weapons.
The patrol is given the job of looking for guerilla fighters in a particular area. Several weeks later, when they’ve made camp one evening, the military turn up. Marlon is so tired that he’s fallen asleep behind a tree. He wakes to the sound of shooting. His friends are shouting. One of them falls to the ground, dead.
It’s the first time Marlon has been involved in a gunfight. He looks round the tree and sees a soldier behind some bushes. He aims and fires. Bullets hit the tree where he’s sitting, and Marlon throws himself down on the ground. When he looks up, the soldier he shot at has gone.
Some of Marlon’s friends start running away. Marlon’s first thought is to run with the others. But then he thinks again. He hasn’t earned any money. The men tricked him.
“I surrender,” shouts Marlon, throwing down his weapon. He steps out from behind the tree with his hands on his head. The soldiers quickly approach him. They can see that he’s a child.
“How old are you?” asks a soldier.
“15, sir,” replies Marlon.
“You’re too young to be a prisoner. You’ll have to come with us and we’ll call someone who can look after you.”
There are two dead people lying on a patch of open ground in the forest. One of them is Marlon’s friend. The other is a soldier. Marlon wonders if it’s the soldier he shot at. 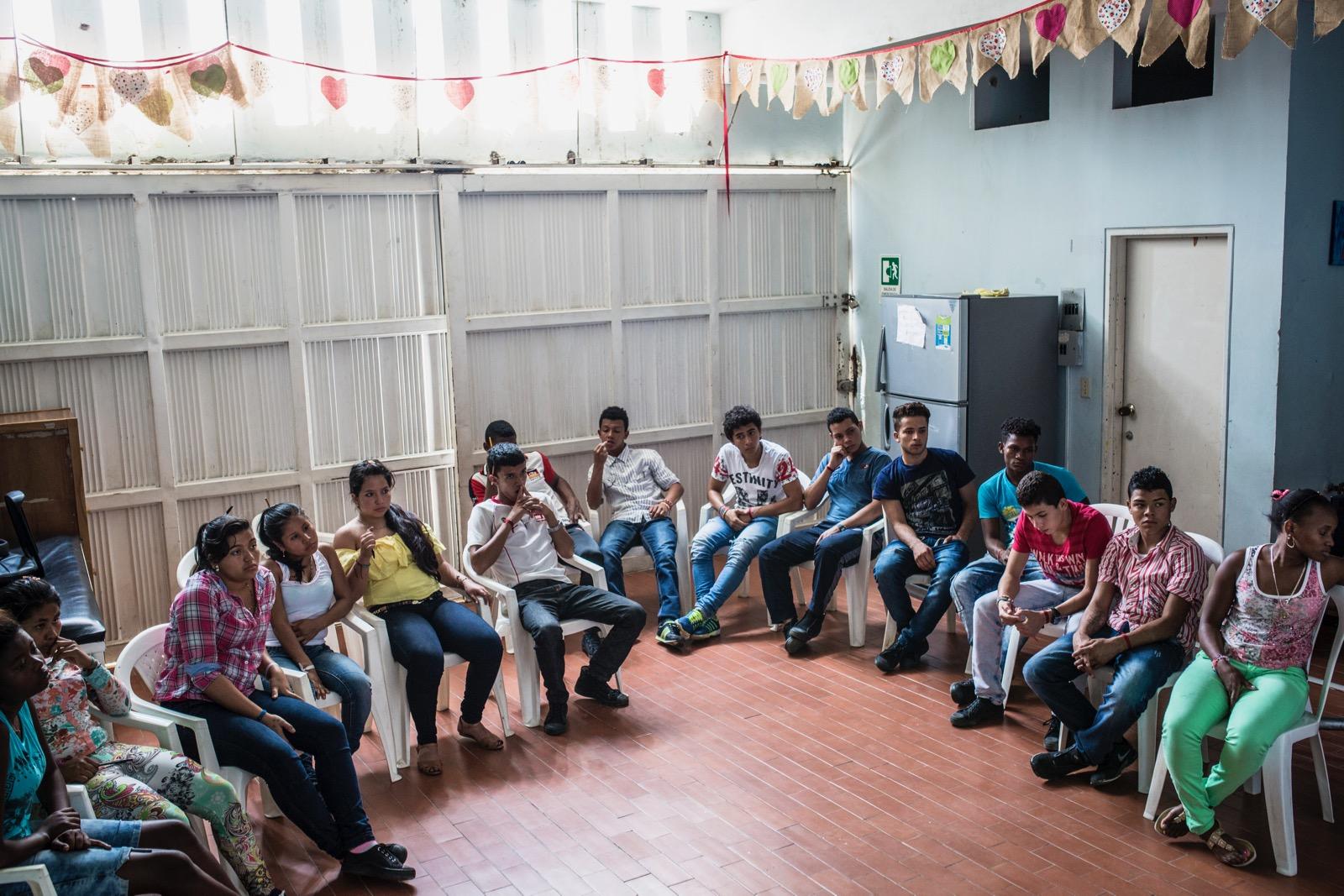 The young people at the centre have all been child soldiers in various armed groups. A few months ago, they would have been killing one another. Now they are friends.

Father Gabriel’s centre
In Colombia it’s against the law to be a member of an armed group. If you’re an adult, you end up in prison. If you’re under 18, you’re taken care of by social services.
At the military base, the soldiers take pictures of Marlon. They can’t interrogate him, but they ask questions about his family, where he comes from and why he joined the paramilitary group.
The next day, a woman from social services turns up. First of all she asks Marlon if the military have treated him well.
“Yes, they’ve been kind,” says Marlon.
Then Marlon has to tell her about his family and where he comes from. The woman says they will contact his family, but because he’s a child soldier he needs to be placed at a reception centre for former child soldiers. At the centre he’ll get to see a psychologist, go to school and learn about his rights.
Marlon hopes to go to the centre in Medellin. It’s near home. Instead he has to fly to Cali. The woman at social services says there’s a very good centre for child soldiers there.
“It’s run by a priest called Gabriel. There are lots of people there who are very good at their job. And there are other children like you. If things go well you’ll be able to go to another centre later out in the countryside, and you can finish school,” says the woman.

Scout without a uniform
The centre is up on a hillside near Cali’s more attractive residential areas. There aren’t any signs that say it belongs to Hogares Claret. Both boys and girls live here. They all come from different parts of the country. Some of them have been guerrilla fighters. Others have been members of paramilitary groups.
Marlon shares a room with three other lads. Two of them have been guerrilla fighters. Marlon thinks about how just a few weeks ago, they could have been shooting at one another in the forest.
All the young people are separated into Scout patrols. Marlon takes the Scout Oath. But they don’t get a uniform. The staff at the centre say they’ve had enough of uniforms. They’ve just had uniforms as child soldiers.
The other boys in Marlon’s patrol vote for him when they’re choosing a leader. There’s a morning meeting every day, and the patrols are given different tasks to solve. Then they meditate. Some­times they do Tai Chi too. In the afternoons they take the bus to a school a bit further away. Marlon enjoys it.
“I want to be a pilot or one of those policemen who investigate crime scenes,” he says.

Scout with uniform
As a former child soldier, Marlon is part of a state programme to help former child soldiers rejoin society. After a couple of months they are sent on to a centre where they live for several years and finish school. Their families can come and visit.
“I’m grateful for the help I get here, but I miss my family. I often feel lonely here.”
Exactly where Marlon will end up is decided by the staff at Father Gabriel’s Hogares Claret and social services. It might be Medellin, Bogotá or Cali. And everyone wears a uniform at the centres, but not the military’s uniform. It’s a blue Scout shirt with a neckerchief. c 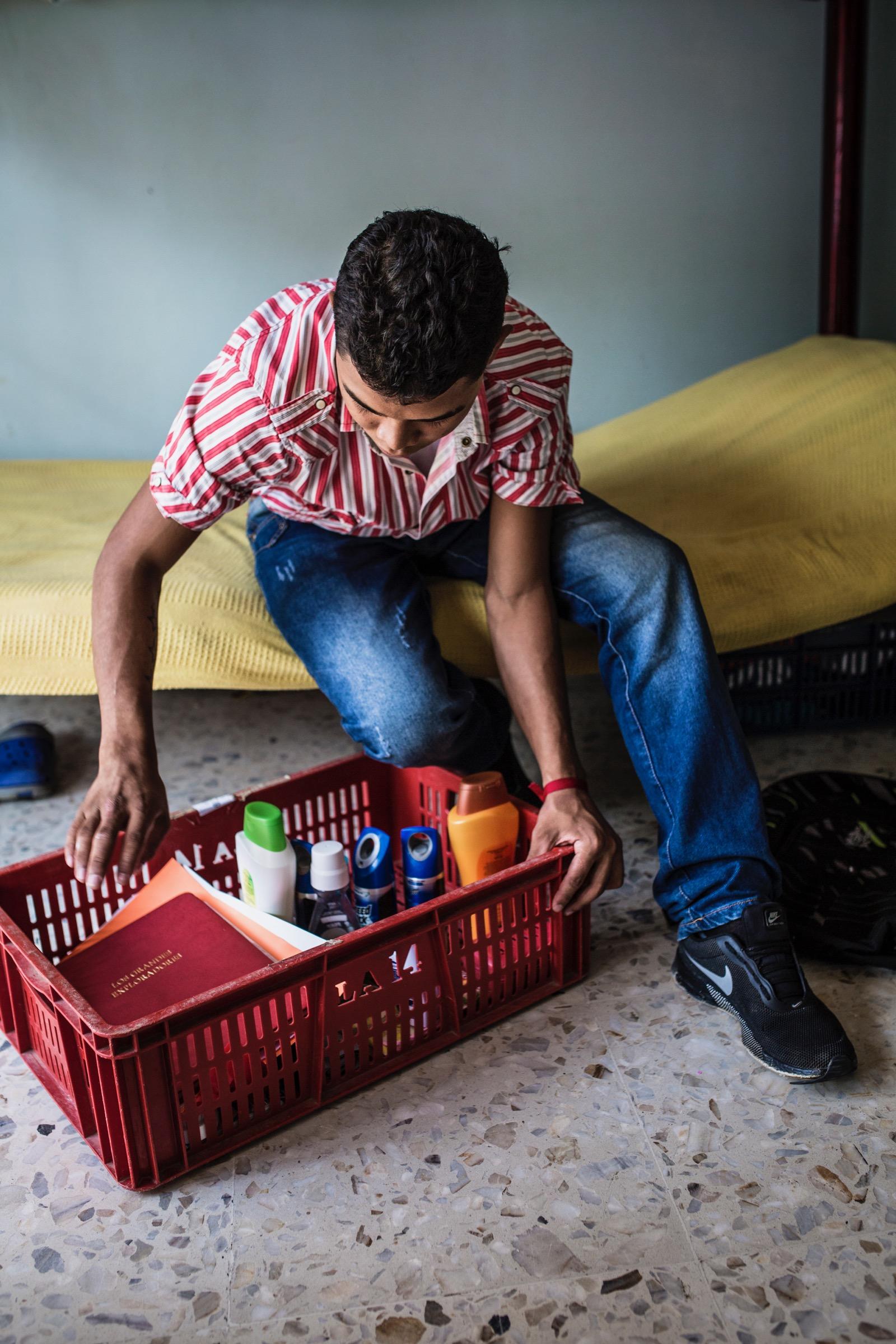 Marlon’s precious things
Under Marlon’s bed there’s a plastic box containing all his belongings. There are things like soap, shampoo, deodorant and plastic slippers, but also a notepad and a book.
“I like writing, so sometimes I keep a diary,” says Marlon. 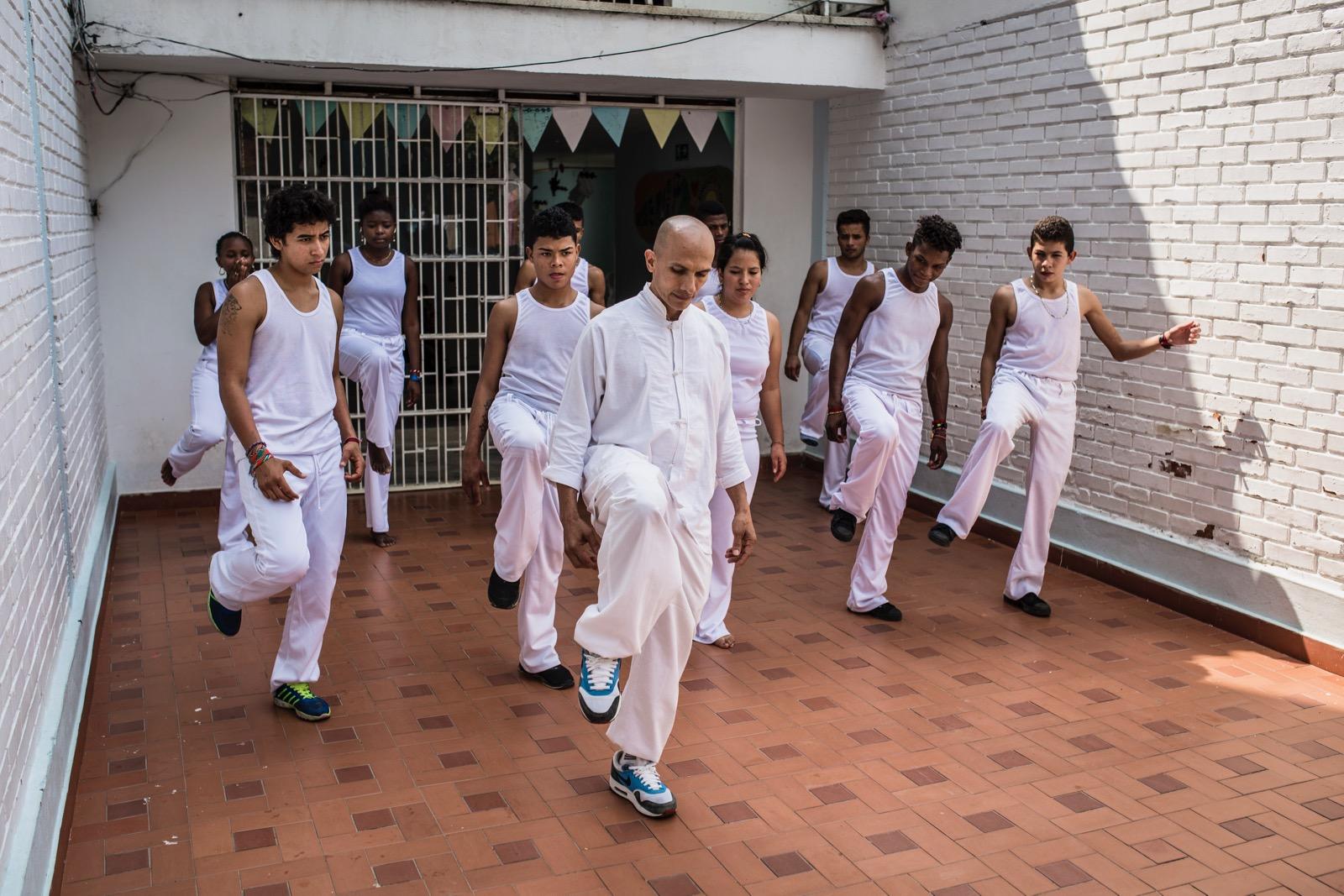 Balance with Tai Chi
Once a week, Tai Chi is on the timetable. It’s a martial art that is also used as therapy in China. Marlon and the others carefully follow the teacher’s instructions and movements.
“It’s important to have both feet firmly on the ground. They’re like tree roots. Without roots, the tree falls,” says the teacher.
Just like when they do yoga, their breathing is deep, calm and quiet. Breathing this way helps to control their feelings. They adopt various positions that symbolise people’s inner conflicts. The teacher explains that if they keep practising Tai Chi, they will improve their self control and balance.
One day they will be able to do all the movements and adopt all positions in a single flow, without stopping. The teacher shows them. It looks like a beautiful, peaceful dance. 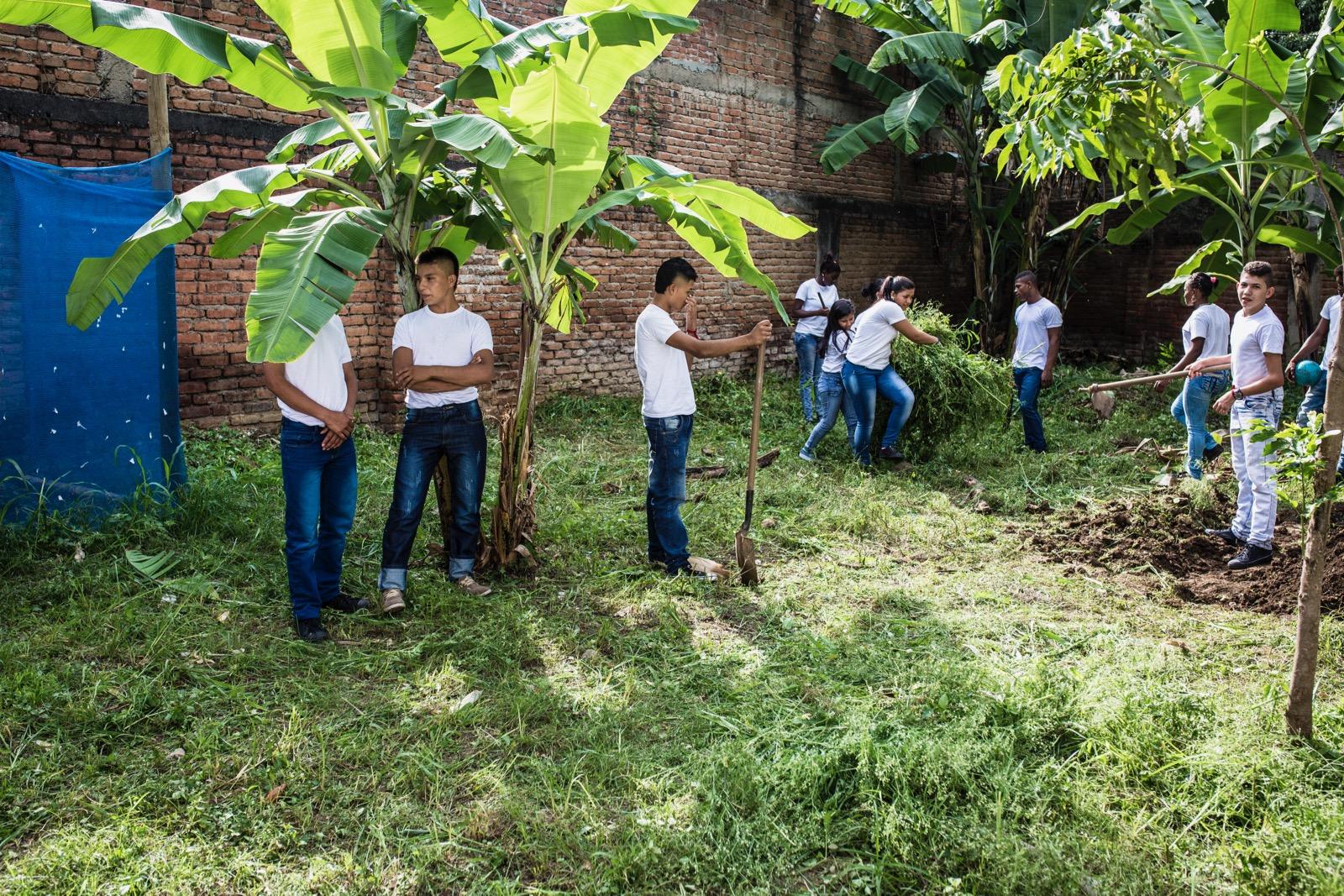 After break, Marlon works in the school’s garden, where the former child soldiers are creating a vegetable patch. 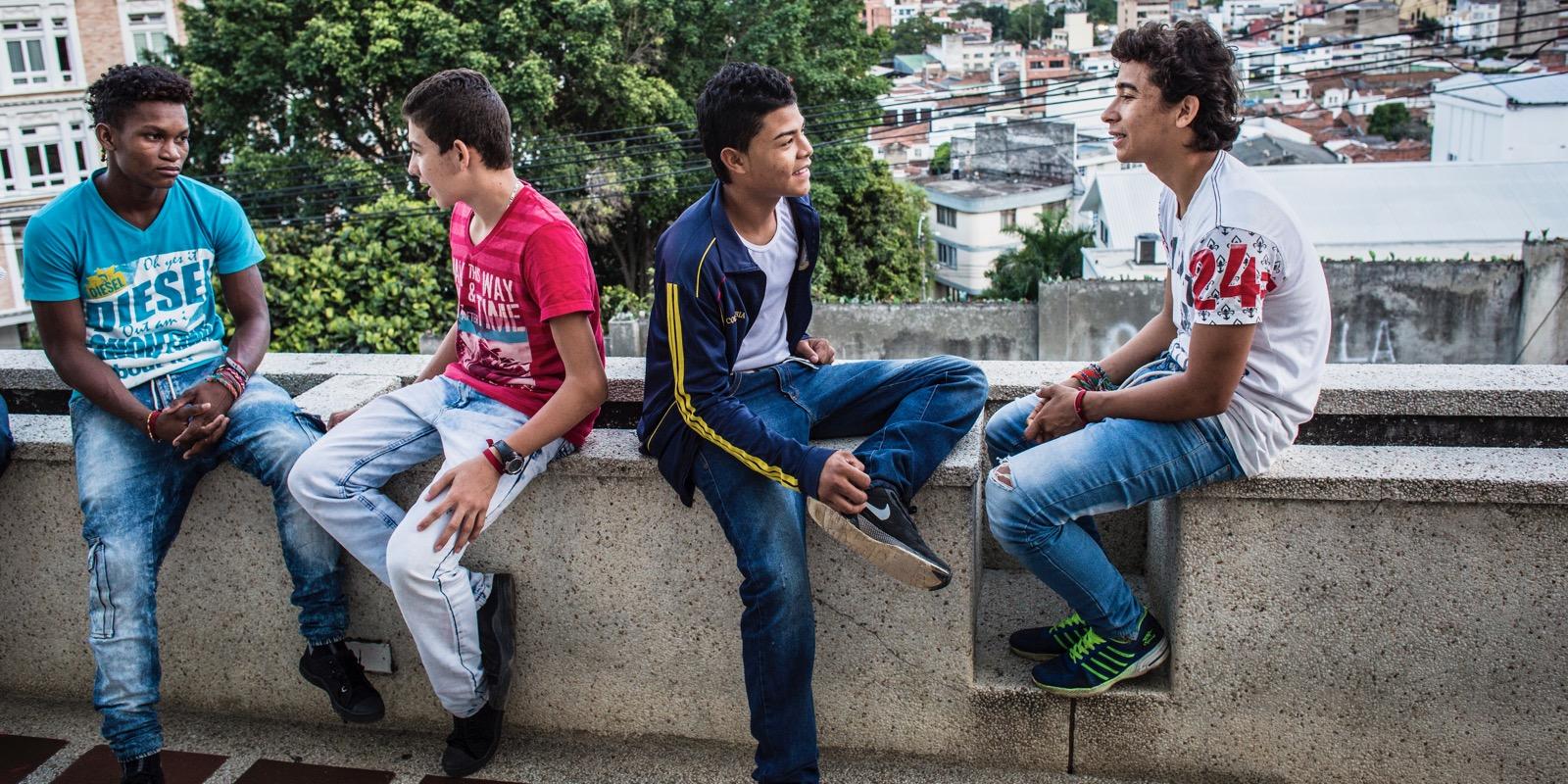 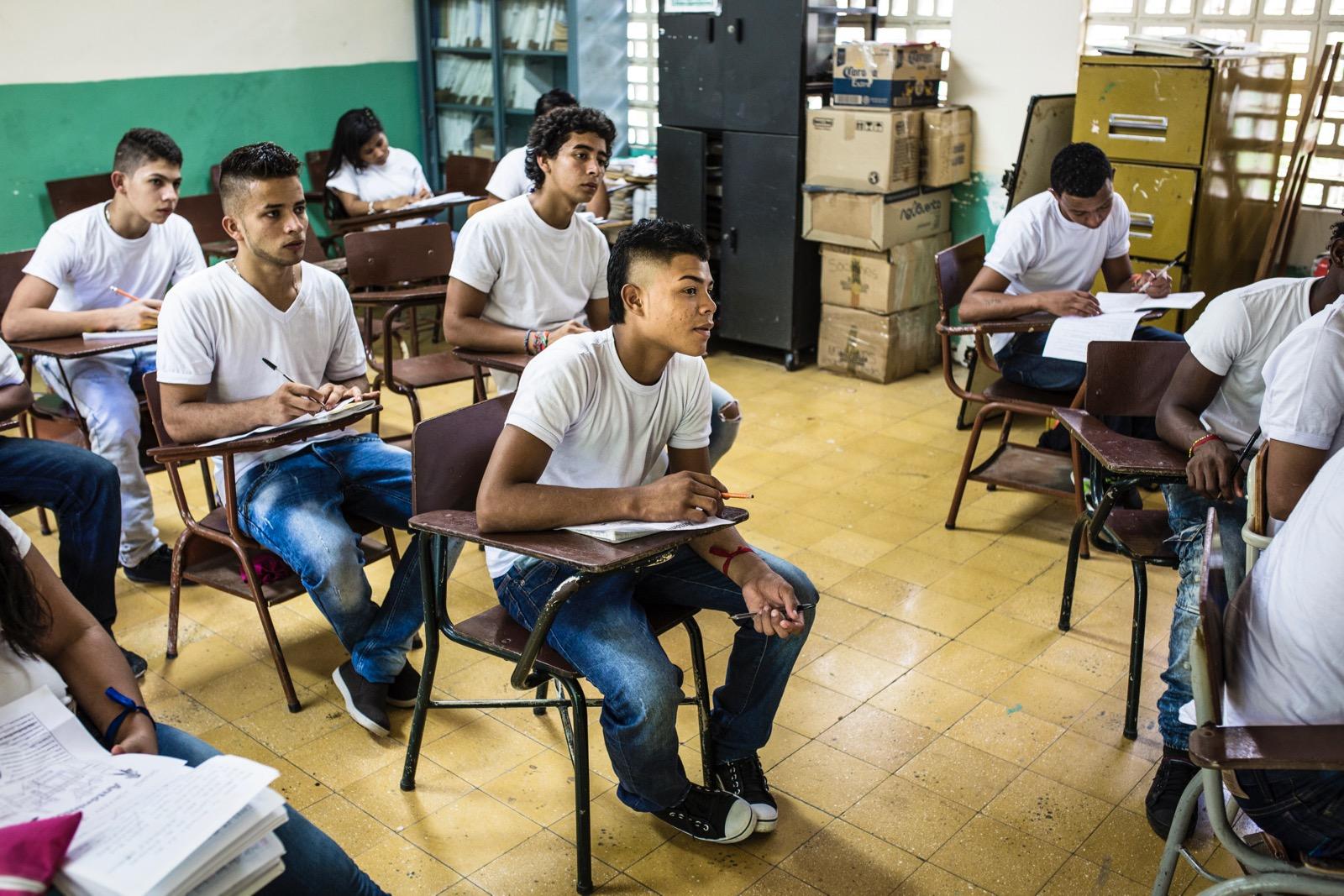 Marlon goes to school every afternoon. He can read and write and he’s good at counting. Some of the young people who have been guerrilla fighters have hardly been to school at all, so sometimes it can get a bit rowdy in the lessons. 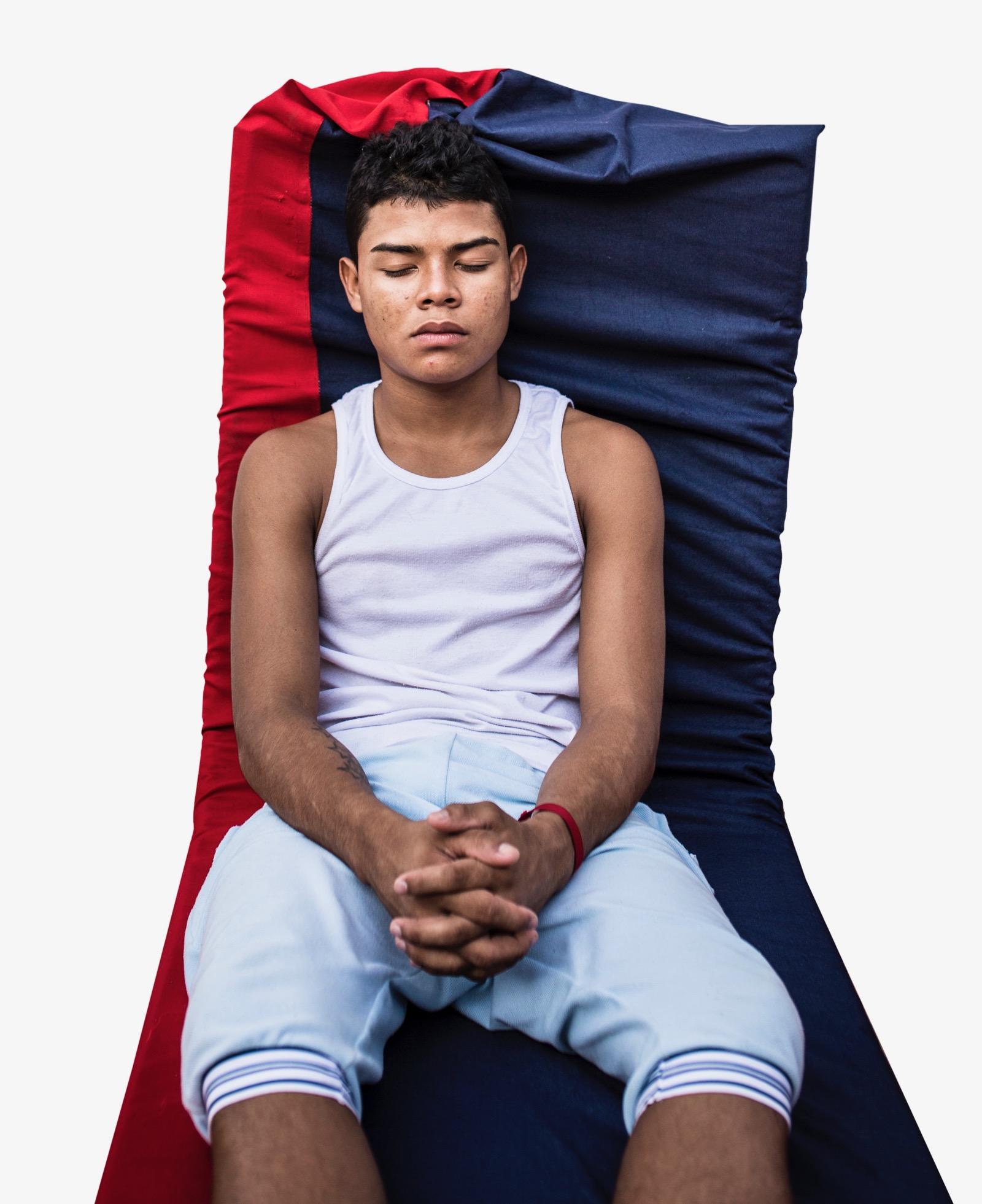 Meditation every day
Meditation is on the timetable every day. Marlon finds it relaxing. 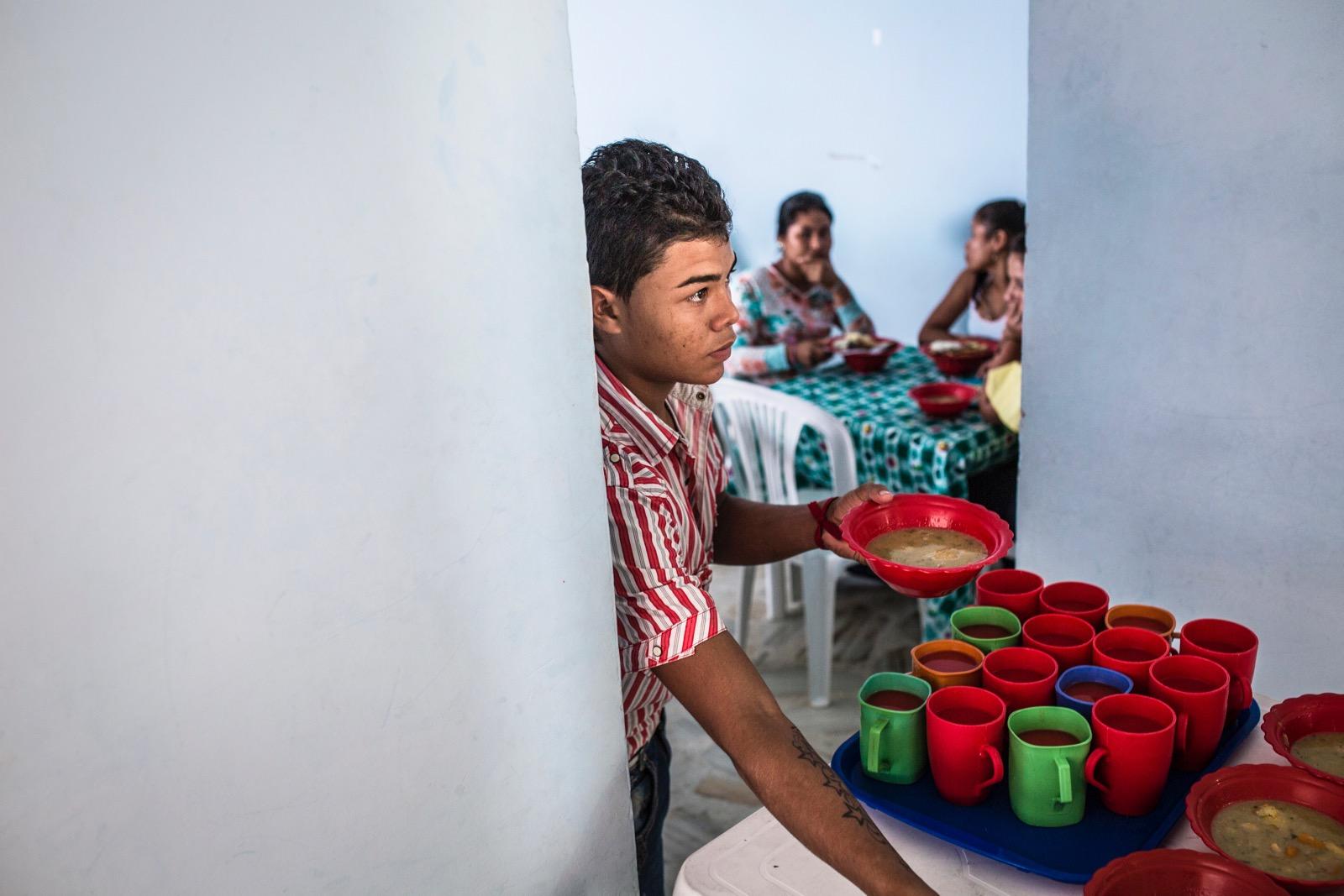