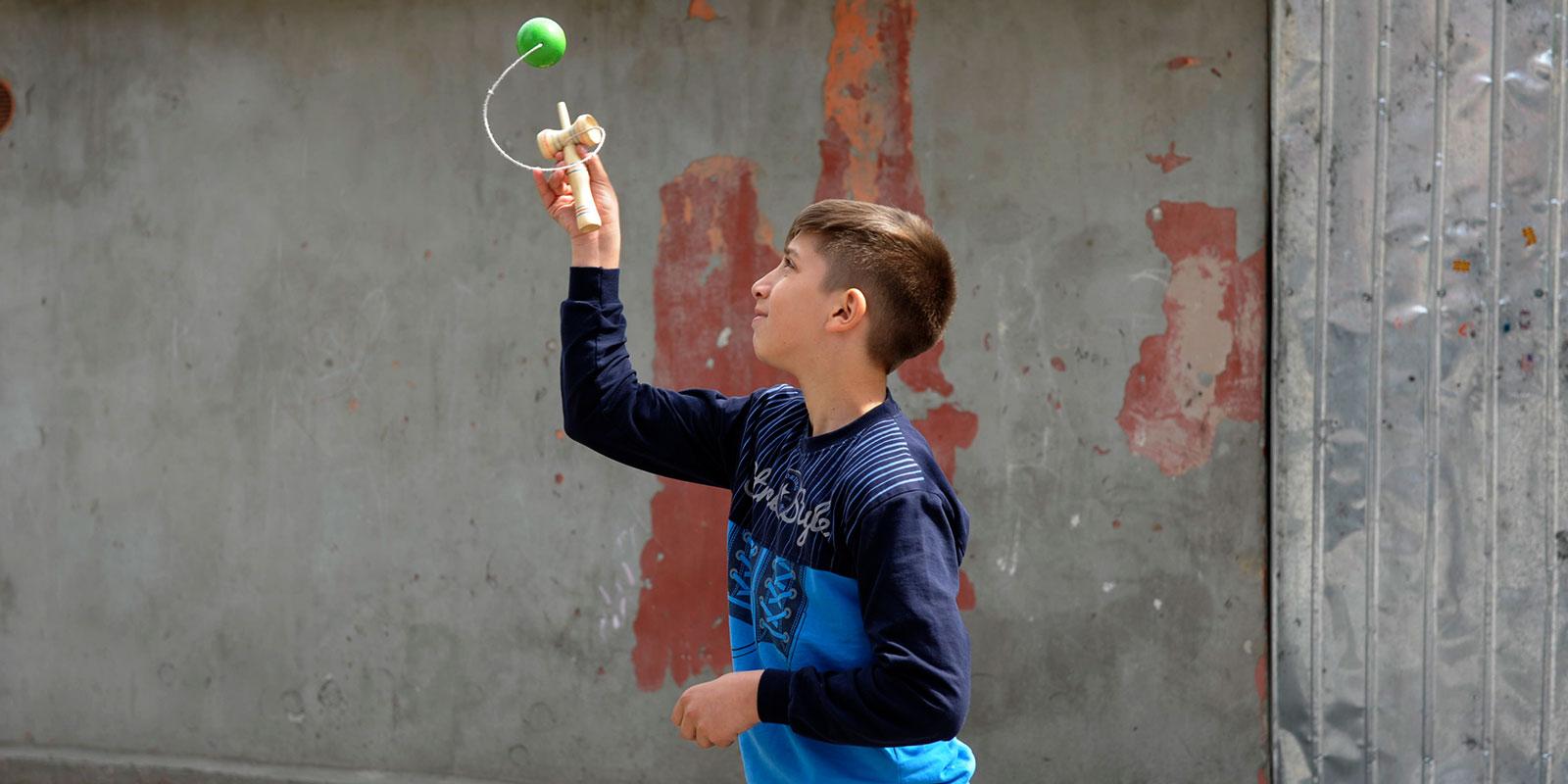 Dario was four when he moved to a children’s home for the first time. At the time, his family was living in a little wooden shack built right on the pavement, with no heating, toilet or running water.

Dario’s mum tried to look after her children, clean and make the place look nice. But it was difficult when nine people were squashed together in one room. Dario’s dad was no help. He drank, took drugs and even beat his mum. Sometimes rats, spiders and other animals got in through cracks in the walls and roof. In the end, the youngest children had to move into a state children’s home in Ferentari: a grey, square building behind a high fence.
“It was horrible,” recalls Dario. “We never got to go out and play. It felt like a prison. Everyone was angry, particularly one woman with glasses. She was always shouting at me when I ran in the corridor or talked too loudly. I was really scared of her. Some of the children escaped, climbed over the fence and disappeared. But I didn’t dare.”

Wanted to go home
Dario missed his mum and cried every day.
“I was always asking when mum would pick me up, and every day the adults at the children’s home said: ‘She’s coming tomorrow’. They lied to stop me crying, but it would have been better if they’d told me the truth. I just got more disappointed and sad.”
Sometimes Dario’s mum visited the children’s home with sweets and biscuits.
“She knew how horrible it was and didn’t want to leave us there. She used to ask to borrow the shower, because we didn’t have a bathroom at home.”
After a while, Dario and his siblings were moved to another children’s home in Ferentari, which was more of a daycare centre. It meant the children could go home sometimes, like on weekends and holidays.
“It was a thousand times better,” says Dario. “The adults there were kinder and we were allowed to play out in the yard. Sometimes I took food from there and gave it to mum.” 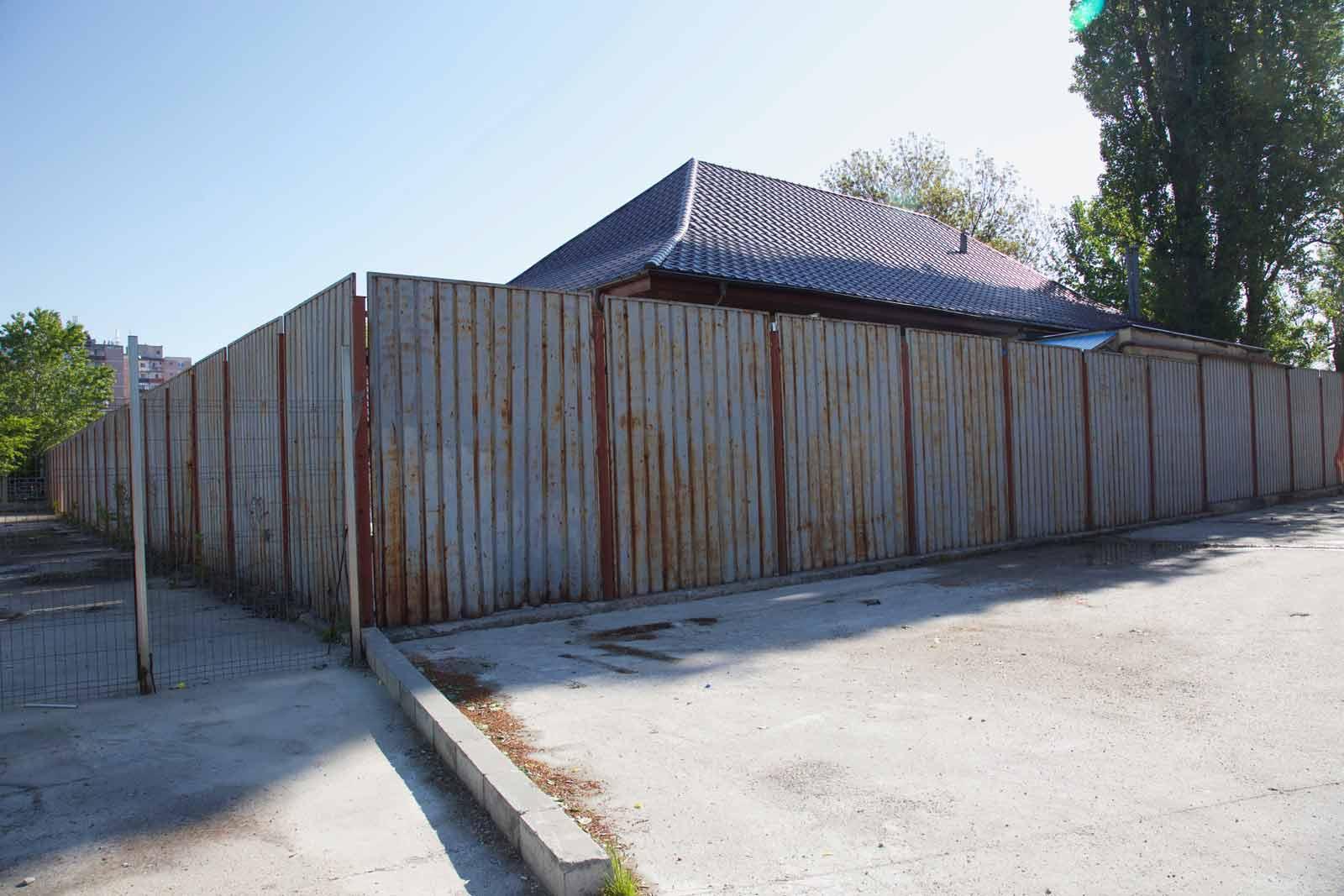 The state children’s home in Ferentari is surrounded by high fencing.

The club helps
When Dario started school, he went to the Alternative Education Club every afternoon and on weekends. It was there that he met Valeriu, who helped him with his homework and took him to football training.
“The adults at the Education Club gave us lots of time and were good at explaining things. It helped me catch up in school. I even won a prize for being one of the best pupils in the class! But suddenly my hearing got bad. I had always suffered from ear infections since I was little. Sometimes there was gooey yellow stuff coming out of my ear. Valeriu took me to the doctor, who said I might go deaf.”
Lots of children in Ferentari get sick from dirty water and infections. Some have even lost their hearing or their sight because of illnesses that could easily have been treated with medicine. But many parents are afraid that the authorities will take their children from them if they ask for help. It’s happened to several families. Some doctors also demand extra payment on top of the usual fee for medicine and health care, even though it’s illegal to do that. Parents from Ferentari are poor and can’t afford to pay any extra.
When Dario started complaining about his hearing at the Education Club, Valeriu realised they needed to act fast. Dario finally got to see a doctor and after a lot of nagging from Valeriu, the hospital agreed to operate. His hearing was saved.
“I managed to get it done because I happen to know the right people and I know how to go about things,” says Valeriu. “If Dario’s mum had tried to get him an operation, it would never have happened. It makes me angry that families in Ferentari don’t get the same care and help as others.” 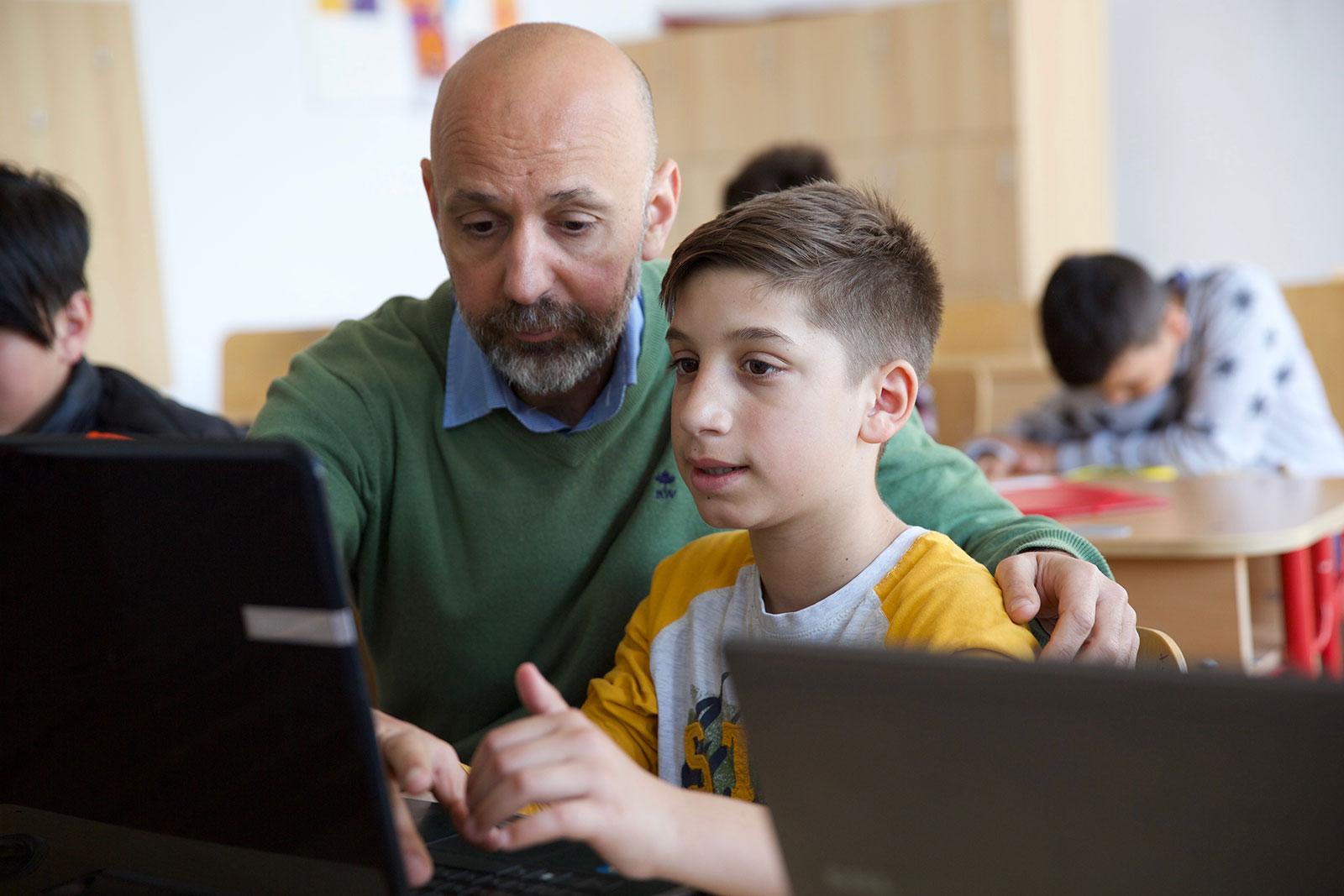 Dario gets help with his homework from Child Rights Hero Valeriu Nicolae at the Alternative Education Club. Dario is now one of the top pupils in his class.

Mum falls ill
One day when mum came to visit the children’s home she looked unusually grey and thin.
“Mum said she was ill and couldn’t come and visit as often. She’d put a scarf round her head, because her hair had started falling out,” says Dario. “By the time the family had a party together on New Year’s Eve, she’d lost all her hair. But she was still happy, because everyone was there together, listening to music and having fun. I didn’t sleep a wink that night!”
A few weeks later, Dario was on his way to the children’s home from football training.
“It had been a good session and I was happy. When I went passed the carwash where my dad works, he saw me and waved for me to come over. ‘Your mum is dead’, he said. I was so sad. I wish I’d found out in a better way.”

Wishes for a time machine
“I wish I had a time machine, so I could go back and make everything better. Not just in Ferentari, but in the whole world. If I got to decide, no child would have to live at a children’s home. They’d be with their families instead. I would get rid of all the rubbish and drugs, so people would be nicer to one another. Maybe I can do that when I’m older and do the same thing that Valeriu does, to make life better for children.” c 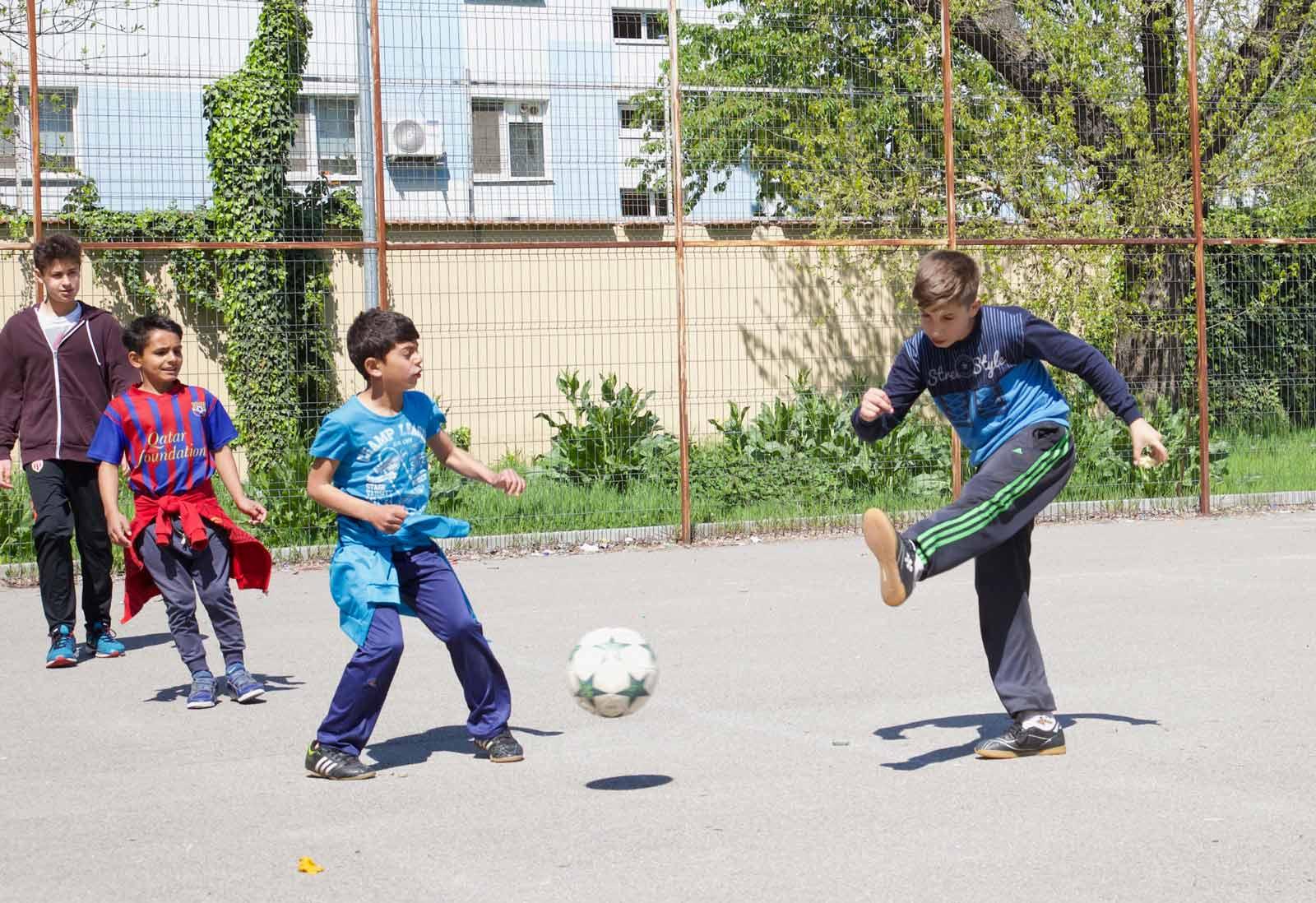 Football is the best thing, according to Dario. His favourite player is called Messi. 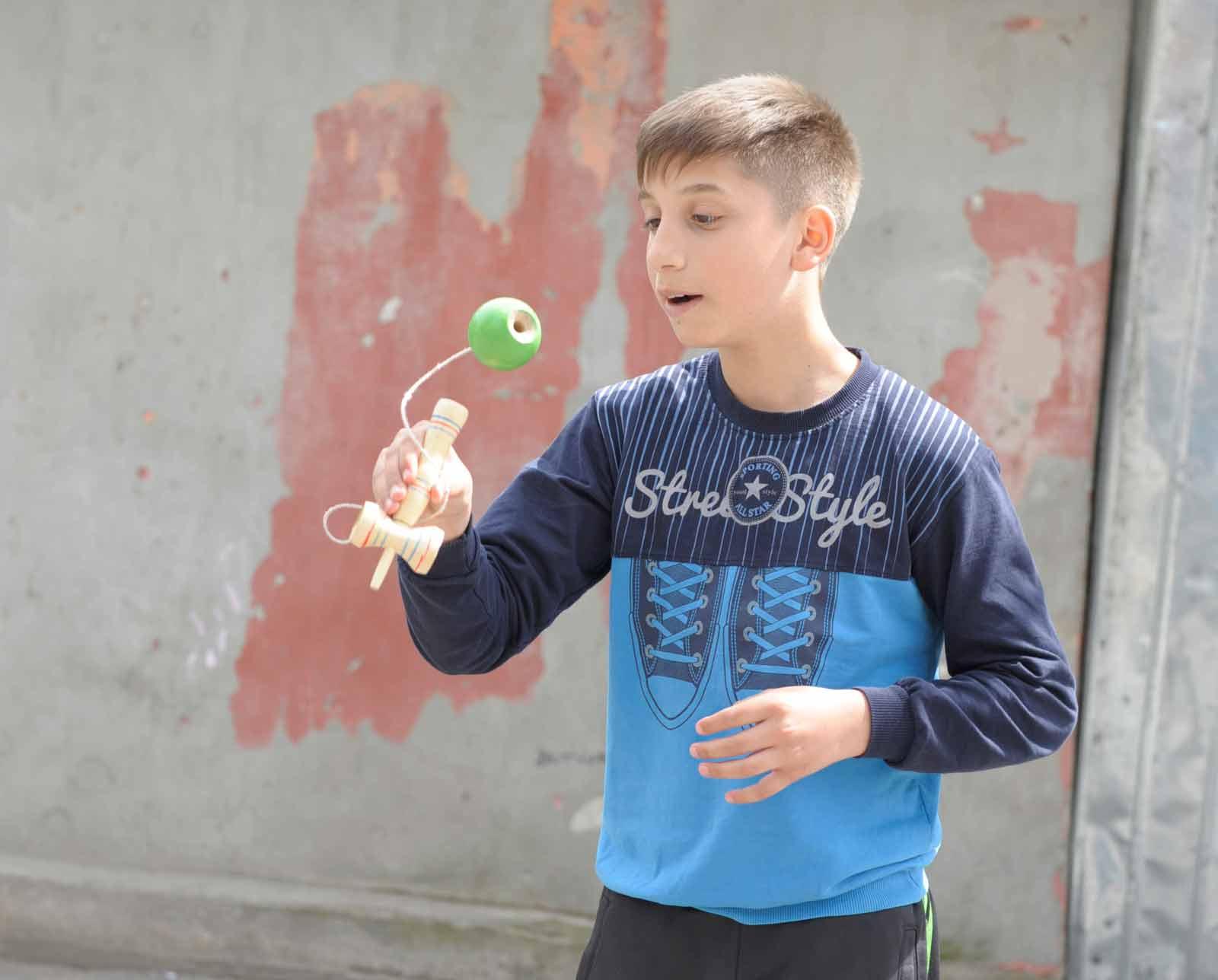 Dario’s favourite toy is called Kendama and it comes from Japan. It was invented hundreds of years ago in Japan and consists of a wooden ball on the end of a string on a stick with three cups and a spike. The aim of the game is to catch the wooden ball on the spike or in one of the cups. After lots of practice, Dario is now an expert! 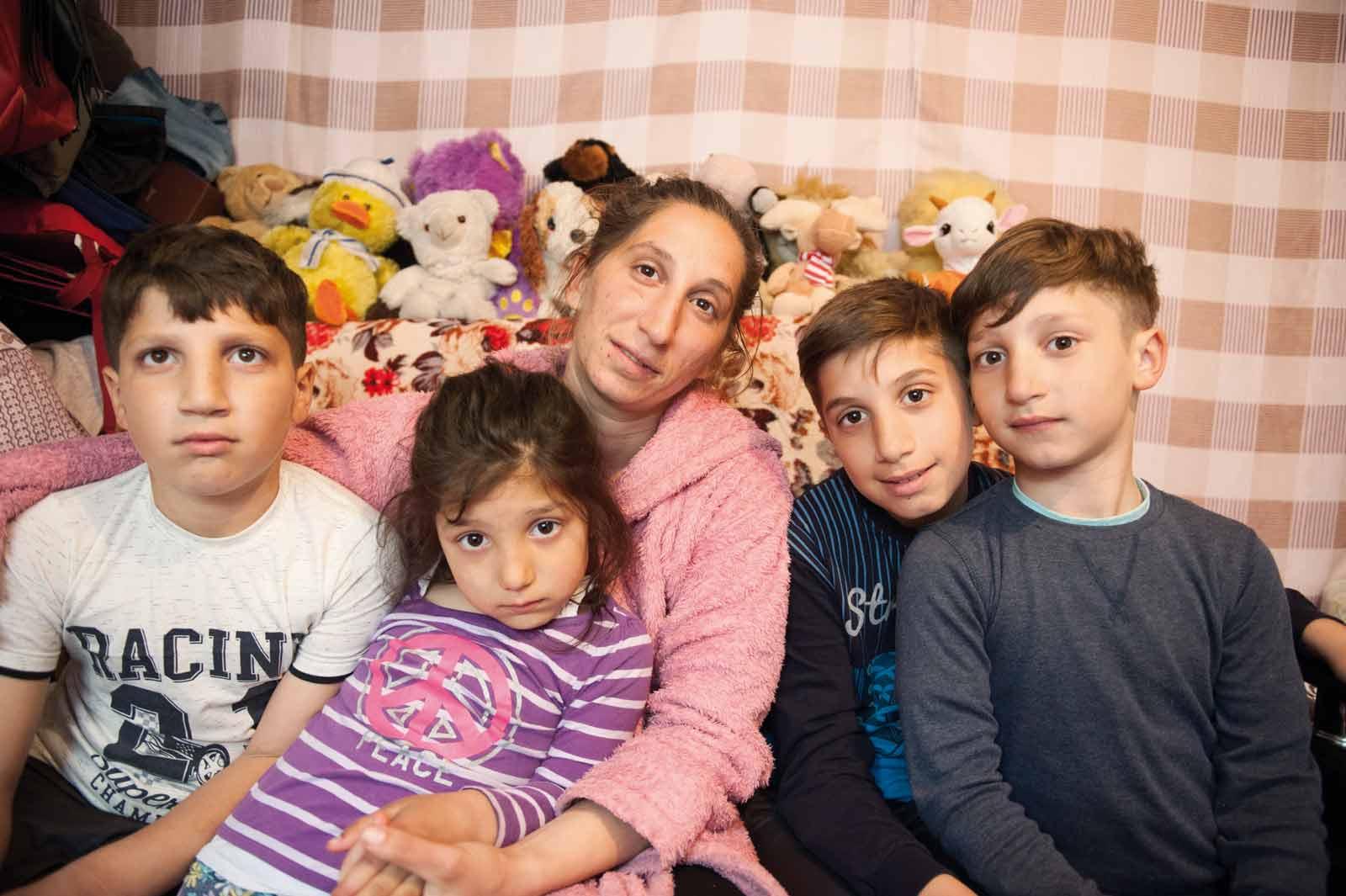 Dario, 12
A children’s home in Ferentari.
Loves: My family. My dog Poofy.
Likes: School, drawing, football, drama.
Misses: My mum.
Sad: When I see all the abandoned dogs in Ferentari.
Looks up to: Valeriu. He has a big heart.

District making children ill
Dario was in danger of losing his hearing after suffering from lots of untreated ear infections. Many of Ferentari’s children get very ill because they are undernourished and get lots of infections, which are made worse by the piles of rubbish and dirty wastewater on the streets. A lot of the children have a constant cough and difficulty breathing because of asthma and the lung disease tuberculosis. Others accidentally prick themselves on needles discarded by drug abusers, and they become infected with hepatitis or HIV. Ferentari used to have health centres, but they closed a long time ago and it’s a long way to the nearest doctor’s surgery. Many parents don’t ask for help because they’re afraid that the authorities will take their children away. It’s happened to several families. And most don’t know that children in Romania are entitled to free health care. Some doctors try to cheat people and demand money for treatment. Valeriu and the Alternative Education Club explain to the families in Ferentari that they are entitled to health care and medical treatment, and give them information about what they can do to stay healthy. But Valeriu says it’s not enough, because the environment in Ferentari is dangerous for the health of both children and adults.