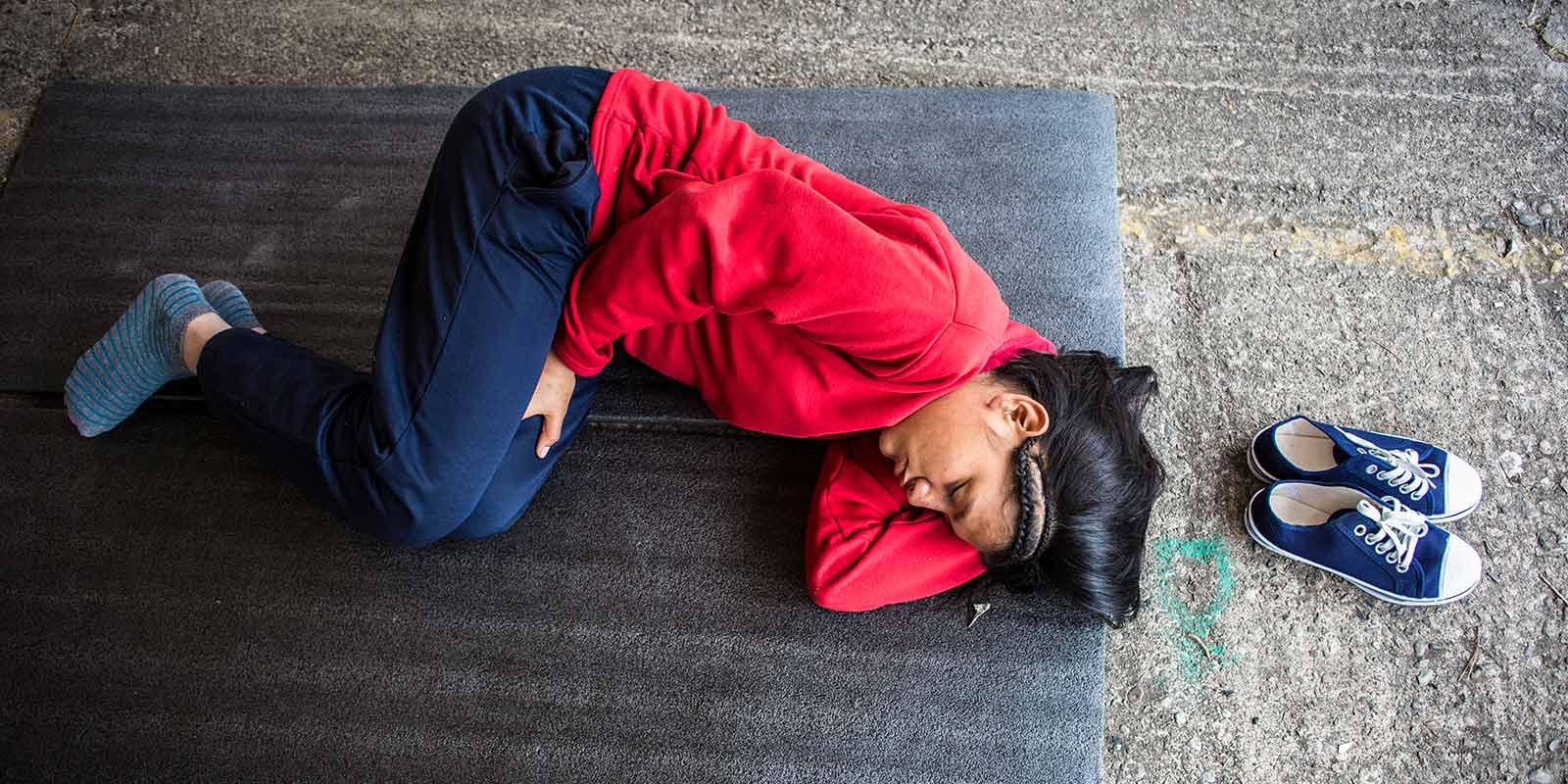 When Dayana arrives at Hogares Claret’s accommodation San Gabriel in Bogotá, the staff can immediately see that she is trouble. She’s 14 and has been living on the streets for two years. Her experiences with police and social services are far from positive. But three months later, something’s changed. Dayana has a goal. To get to see her grandma again and study to be a lawyer.

When Dayana is 12 she runs away from home. She’s never liked school. She gets into a lot of fights and she’s been kept down for two years.
Dayana grew up with her grandma. The day she decides to leave her, she meets an older girl called Lorena in the square. She offers Dayana marijuana and tells her about a life without school and homework. A life of partying and dancing.
Drawn to the idea of this new life, Dayana moves in with her new friend. Lorena’s mum doesn’t care what they do. Together the girls sell drugs during the day and then buy their own later. They go to bars and dance. It’s fun till the police arrive.
“How old are you?” ask the police.
“17,” replies Dayana.
“We don’t believe you,” say the police, and take her to the police station.
“Where do your parents live?” ask the police.
“I don’t have any parents. I’m an orphan,” says Dayana.

Runs away again
The police call a social worker, who comes to the station. She decides that Dayana should live with a foster family.
The mum in the new family is not kind. She locks Dayana in, and Dayana regrets lying to the police. But Dayana has run away before, and a week later she sees her chance. She steals money from the foster family and jumps out of a window.
Dayana feels bolder, and she goes back to Lorena. They decide to steal more money. Dayana has become a thief. She takes more drugs to stop her thinking about it too much. It doesn’t make it any easier, but it costs more money.
Dayana is constantly afraid that the police will catch her again. They are observing the girls and one day they storm into Lorena’s flat. They shout and hold the girls down on the floor.

Grandma says no
The social worker who looked after Dayana last time comes back. She says that Dayana has to go to school. And that it’s illegal and dangerous to sell drugs. But she is also kind and says she’s found another family for her.
The new family lives in a nice house. Dayana gets her own room. Her new foster parents take her to a shopping centre. They let her choose what clothes and toys she wants. There are three other children living in the house. They’re nice. And the food is great.
Dayana can’t leave the house herself, but she can sit outside the front door and sometimes she sees people she knows passing by. They are people she met when she was selling and buying drugs. Then she gets a funny feeling in her stomach. She so wants to be with them and feel the freedom of making her own choices.
The social worker runs some checks and finds out that Dayana isn’t an orphan at all. She looks up Dayana’s mum, who says she wants her daughter to come home. Dayana doesn’t want to.
“My mum doesn’t want me. She hits me and forces me to look after my younger siblings so she can go out. I’d rather go to my grandma,” says Dayana.
The social worker has spoken to Dayana’s grandma too.
“She doesn’t want you to live with her. She’s angry that you ran away and haven’t been going to school.”

To the capital
Dayana now has to go to a home for street children with drug problems. No one really wants to be there, and Dayana decides to run away. This time she wants to go to the capital Bogotá, which is a five-hour bus journey away. A boy has told her about El Bronx, a few districts in central Bogotá that are controlled by criminal gangs.
“You can do what you want there and there are parties all the time,” says the boy.
During an outing, Dayana throws herself out of the bus and runs. She runs until she can’t go any further. She asks some men who drive motorcycle taxis if they can take her to the capital. They laugh.
“It’ll cost you, and we’re not driving that way,” they say.
But one of the men says he can help. He gives Dayana a lift to the home of a woman, who says Dayana can live there.
Dayana is happy at first, but then she understands that the woman sells sex. She wants Dayana to do it too. Dayana gets scared. She remembers when a man threatened her with a knife and raped her. She cries and tells the woman she doesn’t want to.
“You can work here cleaning and cooking food instead then,” says the woman.

Wants to forget
Lots of strange men come to the woman’s house. Dayana gets free drugs sometimes, but soon she starts missing home. When she calls her grandma, she cries.
“Pack your clothes and I’ll come and get you,” says Grandma.
Somewhere inside, despite everything, Dayana is happy she never made it to Bogotá. But home at Grandma’s, the nagging starts.
“You must go to school. You can’t go out. You have to give up drugs.”
Dayana thinks about what that boy told her about El Bronx in Bogotá. She feels that she has to get there. She looks up Lorena and they decide to travel together.
They meet a man at a bar who says he can help them, but that Dayana has to sleep with him. For the first time, she lets a man pay to have sex with her. Dayana feels awful. She doesn’t really want to. Afterwards, she and Lorena drink alcohol to forget. 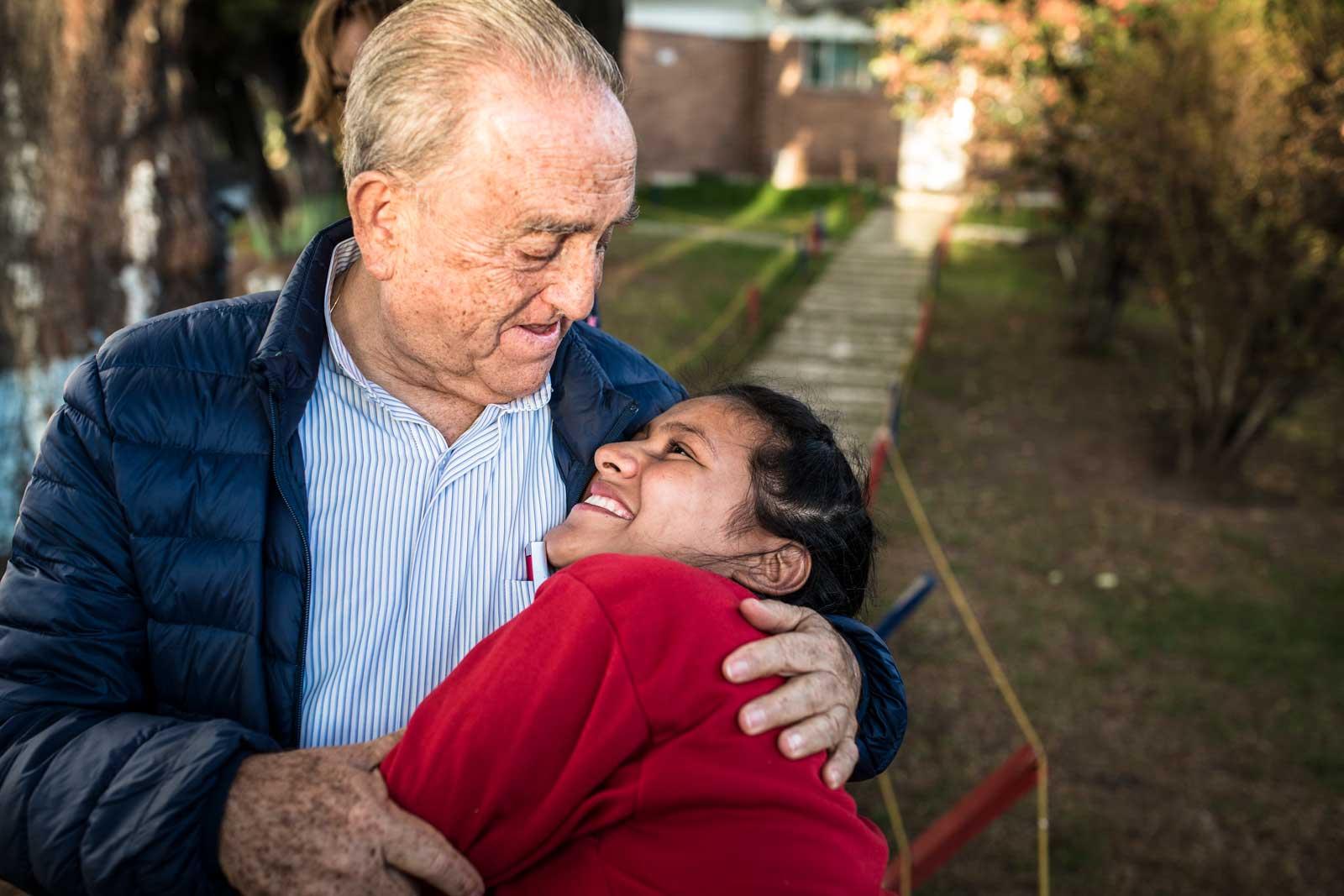 Father Gabriel always listens and talks to all the children. Dayana likes that. She’s met lots of adults she trusts at Hogares Claret’s reception centre for street children. 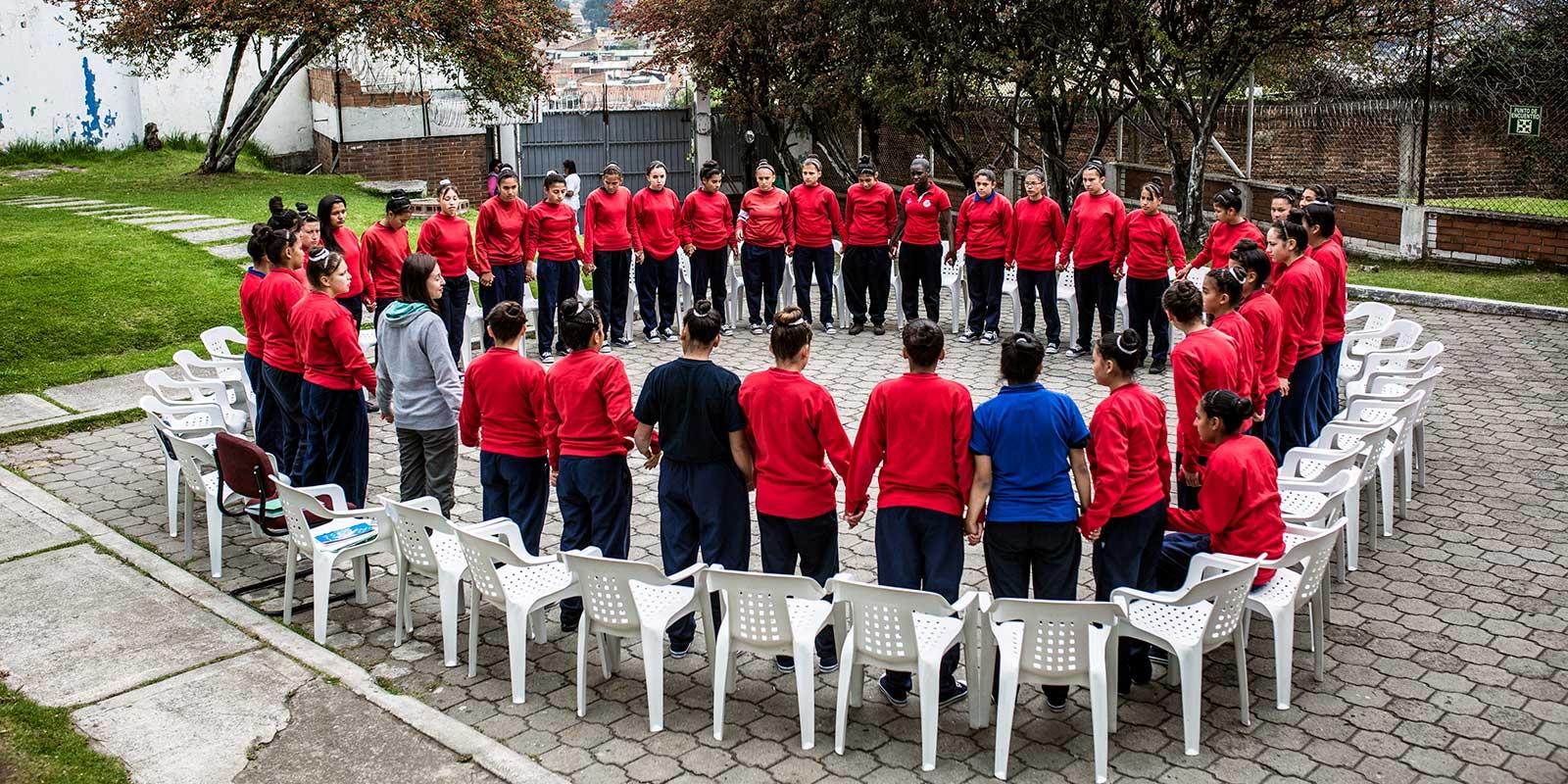 The girls in the ring were arrested during a police raid. Now with the help of Hogares Claret’s reception centre for street children, they are on their way towards a better life. 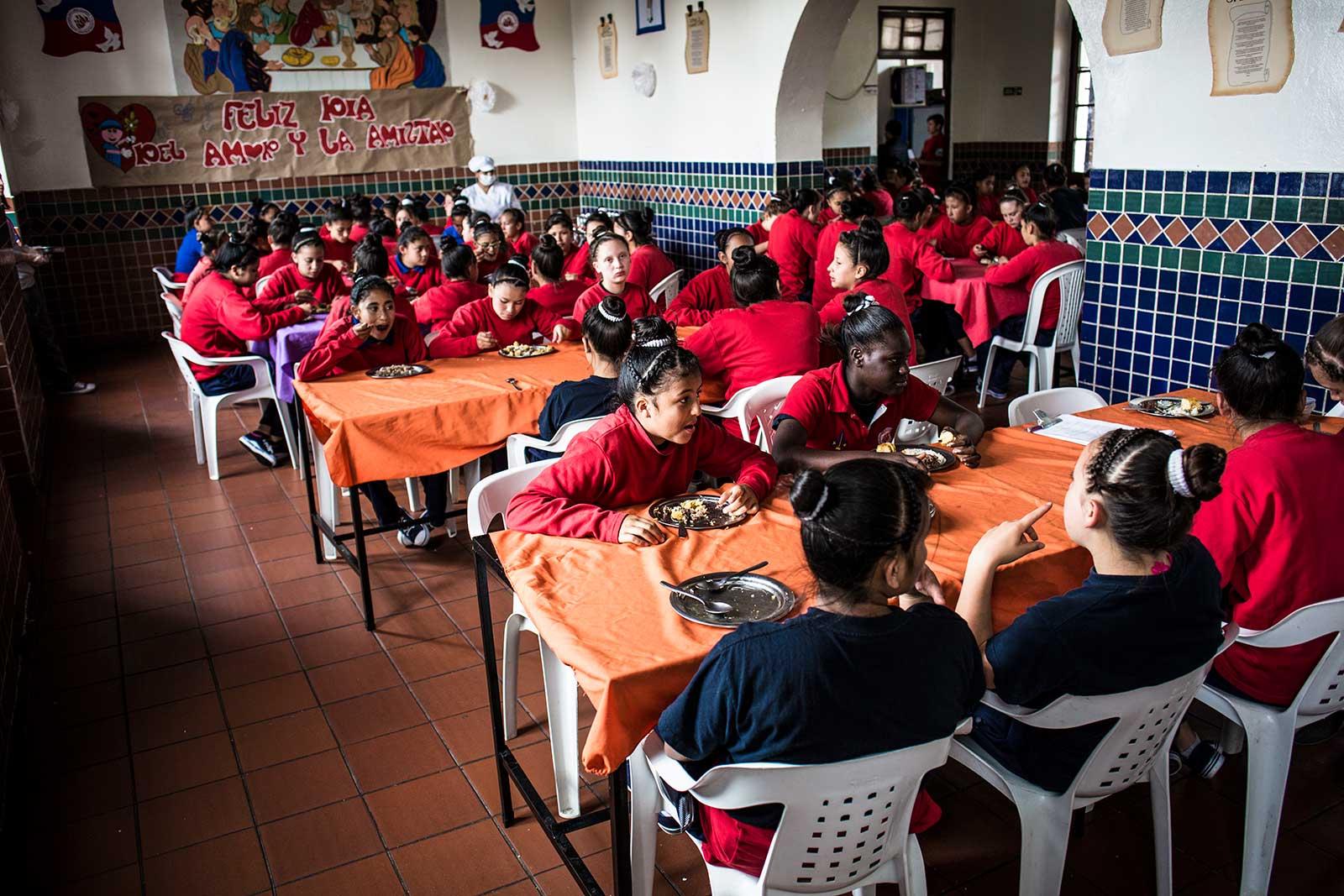 No knives or forks
When food is served at San Gabriel’s young people’s centre, there are only spoons to eat with. All food is served on the plates at the table. Then the spoons and mugs are handed out. When Dayana and her friends have finished, all the spoons, plates, and mugs are counted. Cutlery can be used as a weapon. That’s why all the spoons are collected, and only the adult members of staff can have knives and forks. 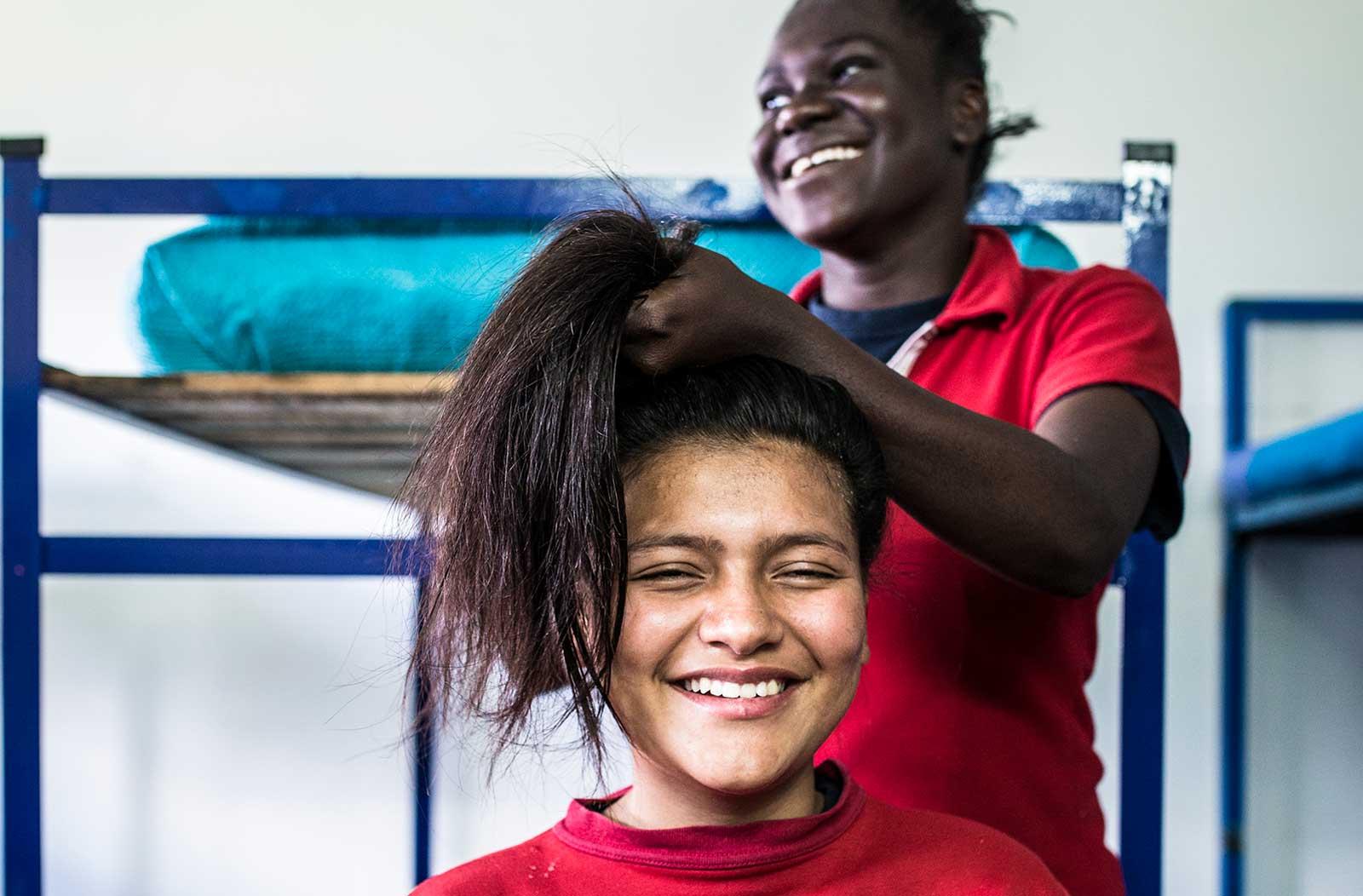 A different hairstyle every day
Every day, Dayana has a new hairstyle. All the other girls at San Gabriel have the same hairstyle too. The girls’ combs hang in little cases on the walls. Every morning, a friend combs through Dayana’s hair and puts it up in the style for the day. Then Dayana combs her friend’s hair. They do this to keep their hair clean and avoid lice. These are the hairstyles for each weekday: 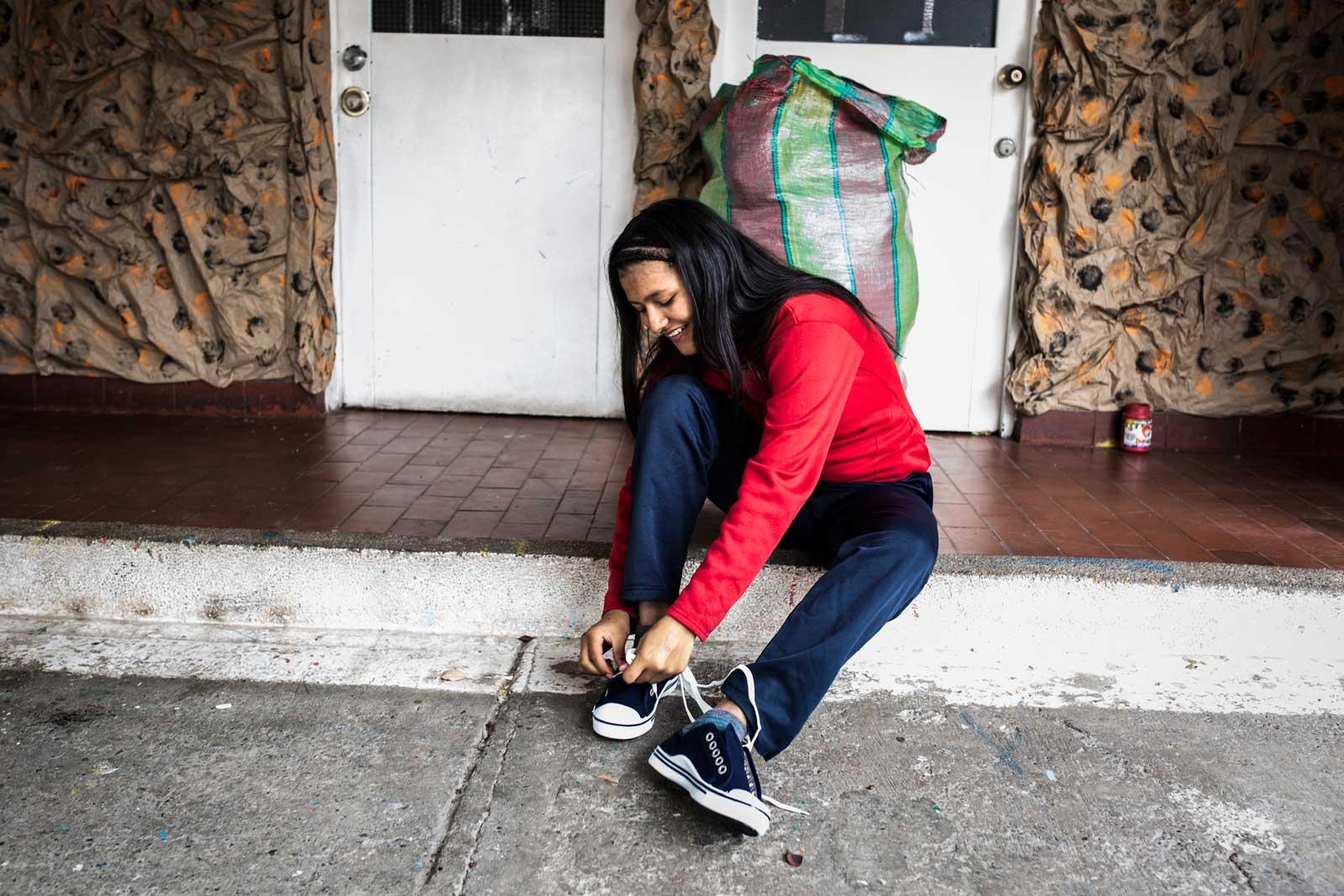 Dayana’s wardrobe
Everyone who lives at San Gabriel, Hogares Claret’s reception centre for street children, has the same clothes. A red top and a pair of blue tracksuit bottoms. Everyone has black shoes, but they can also wear plastic slippers indoors. The clothes Dayana was wearing when she arrived at the centre are kept in a cupboard. There’s a jacket, a pair of ripped jeans, a vest top and a pair of trainers. They’ve been washed. She’ll get them back when she goes home or to another of Hogares Claret’s centres for young people.
“I don’t think they’d fit me now. I was so skinny when I came here. We hardly ate anything on the streets. But they are nice, my clothes. I wish I had clothes like that now,” says Dayana.