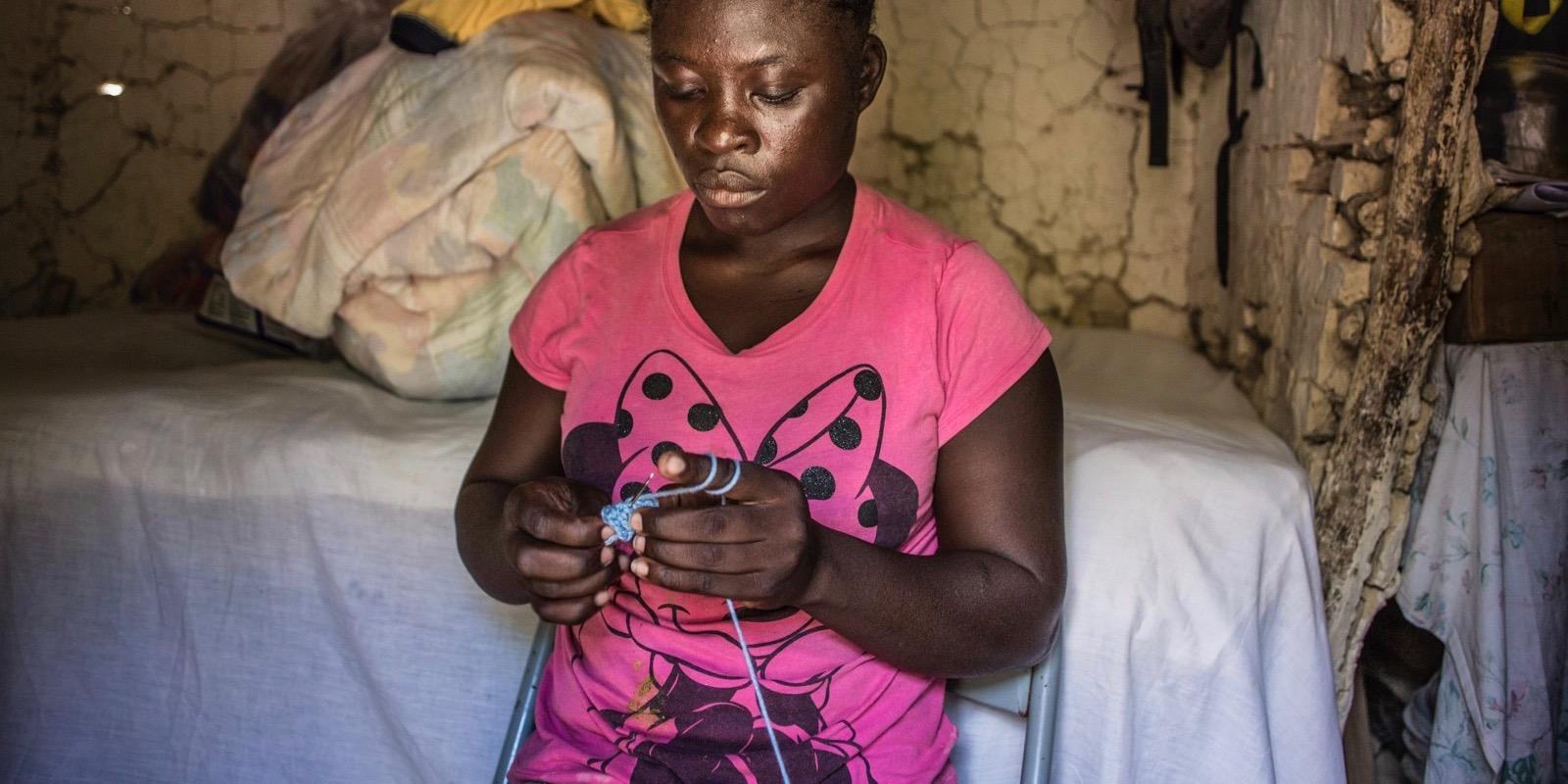 Poulette’s nightmare starts when she is eight years old. She’s taken away by police, who say she’s murdered a child. The truth is that the child died of an illness, but Poulette is put in prison. The weeks become years, and Poulette ends up spending eight years in prison.

The woman was adam­ant. She pointed at Poulette and said:
“It was her who poisoned the milk so the child died.”
The police asked Poulette if she had given milk to some children earlier in the day.
“Yes, my cousin and I did,” answered Poulette.

Poulette was eight years old. She was sitting on the ground, washing up. One of the neighbours’ little girls was sitting next to her. Poulette had promised to look after her.

Poulette’s family lived in a small village up in the mountains. Her mum was working away from home for a couple of weeks. Her dad and older siblings were working for a farmer, gathering the harvest.

The police asked Poulette to come with them.
“But what about the girl I’m supposed to be looking after?” asked Poulette.
“She’ll find her own way home,” said a policeman.

The police drove Poulette to the police station in the neighbouring village. Poulette didn’t have a clue what was going on. She was frightened, and didn’t say a word.

When Poulette’s mum Carmen came home, she asked where Poulette was. No-one knew. They only knew she’d disappeared. Someone said the police had taken her, but that seemed odd.

A motorcycle taxi took Poulette’s mum across the poor mountain roads to the police station. A policeman there said that Poulette had gone with a few other policemen to the capital Port-au-Prince.

It couldn’t be true, thought her mum Carmen. How would she find her daughter in the big city? And how would she afford to get there? Carmen cried. She understood that she may have lost her youngest daughter forever.

Carmen didn’t believe the police, but what could she do? Who could she talk to? She hadn’t been to school, and nor had her husband or any of her children. They didn’t understand how things worked.

In Port-au-Prince, the police car with Poulette stopped at a large prison. There were rolls of barbed wire on top of the high white walls. There were armed guards in towers, and in the corners, cameras were filming everything.
“You’re going to live here now,” said the policeman.

Poulette cried. She wanted her mum. She hadn’t killed anyone. She just gave some of the children in the village a little milk. What did she do wrong?

Poulette was locked into a prison cell with thirteen other girls. She was the youngest. They slept in bunk beds.

On the wall outside the prison, in big blue letters, it said that it was a women’s prison and a facility for rehabilitation and support for young girls to help them rejoin Haiti’s lawful society. That last part wasn’t true.

The guards mistreated everyone, regardless of their age. One of Poulette’s cellmates took a sandwich with her from the refectory once. She hid it under her pillow. The next day, the sandwich was gone.

Her cellmate thought Poulette had eaten it.
“What have you done? You knew it was mine,” she shouted.
“I didn’t do it,” answered Poulette.
“Yes you did, I know it was you,” shouted the cellmate, who wanted to fight.

A prison guard appeared at the last minute. The other girls in the cell explained what had happened. The guard took the girl who had hidden the sandwich. She was put in isol­ation, without any light. She had to stay there for four days.

Another time, the girls were washing. Poulette was last.
“Are you still here?” asked one of the guards.
“Yes, I haven’t finished washing,” replied Poulette.
“You know your time’s up. It’s isolation for you,” said the guard.

As a punishment, Poulette was locked in the dark isol­ation cell for two days. She slept on the cold cement floor. 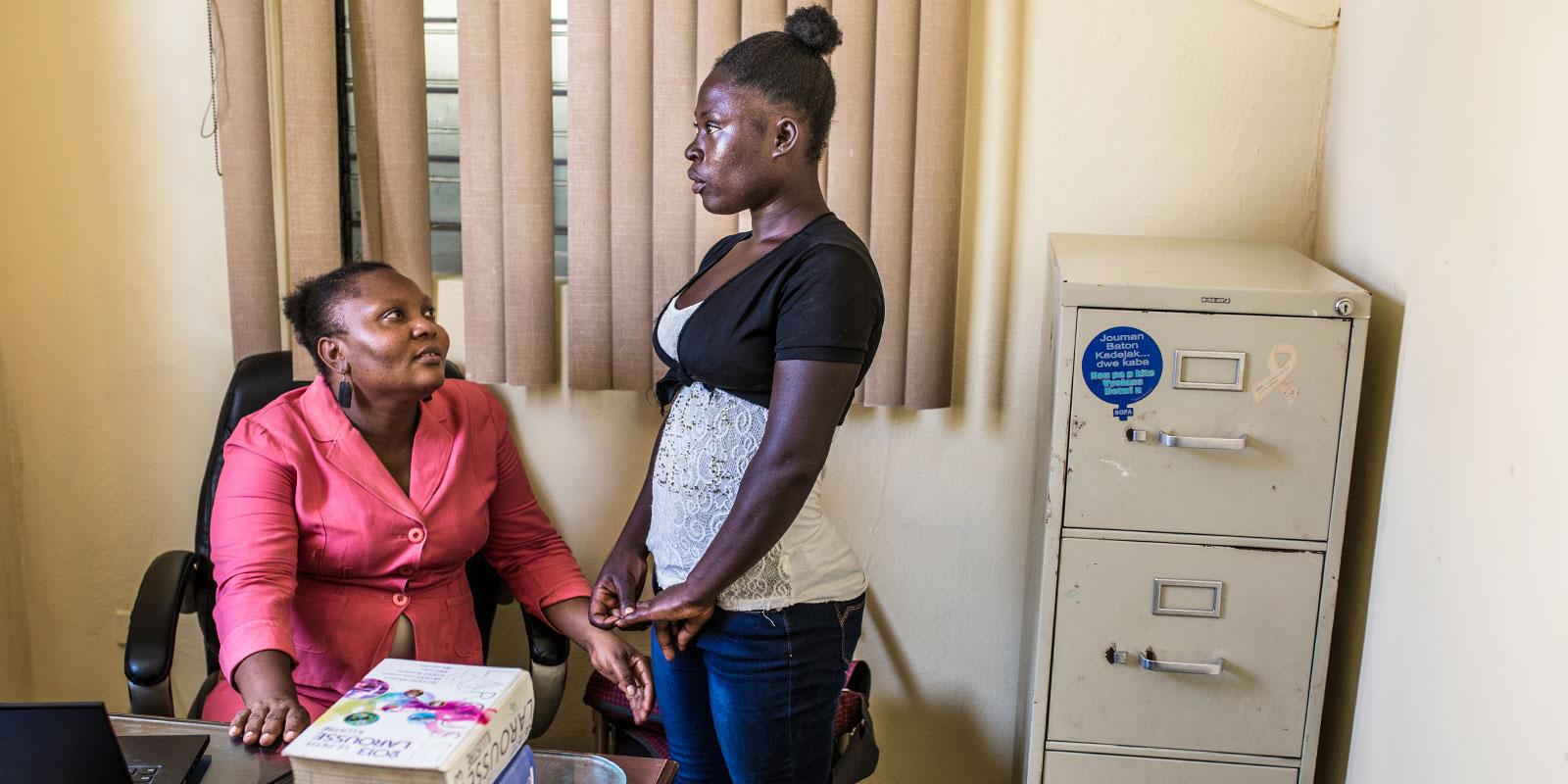 When Guylande went to see Poulette in prison, it turned out they were from the same village.

Time passed. The days turned into weeks, and the weeks turned into months and years. Poulette had spent six years in the prison. She was 14 and still didn’t know why she was there. She had never had a trial in court.

There were lots of other girls in prison who hadn’t had a lawyer or an opportunity to defend themselves in a court of law. They’d been driven straight to prison by the police.

Every week, a group of people came to the prison to talk to some of the girls. They asked questions about their names, where they came from, where their parents lived, why they were in prison and whether they had a lawyer.

Poulette told them her name and where she was from. The woman she spoke to said she might be able to help her.

After a while, Poulette was called to the prison’s waiting room. There was a woman there who said her name was Guylande and that she was from the same village as Poulette.
“I’m a lawyer and I work with the organization Zanmi Timoun. We’re coming here to help you get out of prison. Because children shouldn’t be in prison,” said Guylande.

Poulette listened to Guylande, who explained that a long time ago she’d heard about a girl who’d suddenly disappeared from her village.
“When one of my colleagues came to me the other day and said she’d spoken to a girl in prison who was from my home village, I thought I have to come here myself,” said Guylande.

After a while, Poulette realised that she and Guylande knew the same people. Guylande had even spoken to her mum.

It was the first time in six years that she’d heard anything about her village and her family. She cried becauseshe was so happy, but also because she missed her mum so much.

“I promise I will help you. Firstly, children as young as you were when you first came here should never be in prison. And secondly, you have to have a trial before you go to prison,” said Guylande.

Staff from Zanmi Timoun travelled to Poulette’s village. They interviewed the family, the neighbours, the woman who’d accused Poulette of murder and the police who’d arrested her.

A year and a half later, Zanmi Timoun were able to put the case before a judge. He looked at the investigation and said that whether Poulette was guilty or not, she had to come out of prison. Such a young girl should not be behind bars, he thought.

It was a wonderful day. Poulette was about to turn 16. She’d been in prison for eight years, but now she’d be allowed home.

“I’m going to tell you what really happened that day, eight years ago,” said Guylande.

The woman who had accused Poulette of murder was mad. The child who died was seriously ill. It wasn’t the milk that killed the child. It was the illness.

The woman had seen Poulette and her cousin giving milk to the children. When one of the children died shortly after, she went to the police. The police looked for Poulette’s older cousin, but they couldn’t find her. So they arrested Poulette instead. There was never any investigation. The police just put Poulette in prison.

“Unfortunately it often happens that way. Lots of children are in prison when they shouldn’t be,” said Guylande.

Staff from Zanmi Timoun drove Poulette home to her village. They drove up in the mountains; the roads got worse, the hills greener, and the palm leaves swayed into the wind. It’s so beautiful, thought Poulette. Carmen and the rest of the family were waiting at home.

“I can’t believe it’s true,” cried her mum with happiness, and she hugged Poulette hard. The tears ran down their cheeks.
“I thought you were dead, but now you’re back. This can only be God’s doing,” said Carmen.

With Zanmi Timoun’s help, Poulette was able to start school. She was allowed to start fourth grade because she’d been to school a little in prison. She’s the first in her family to go to school.