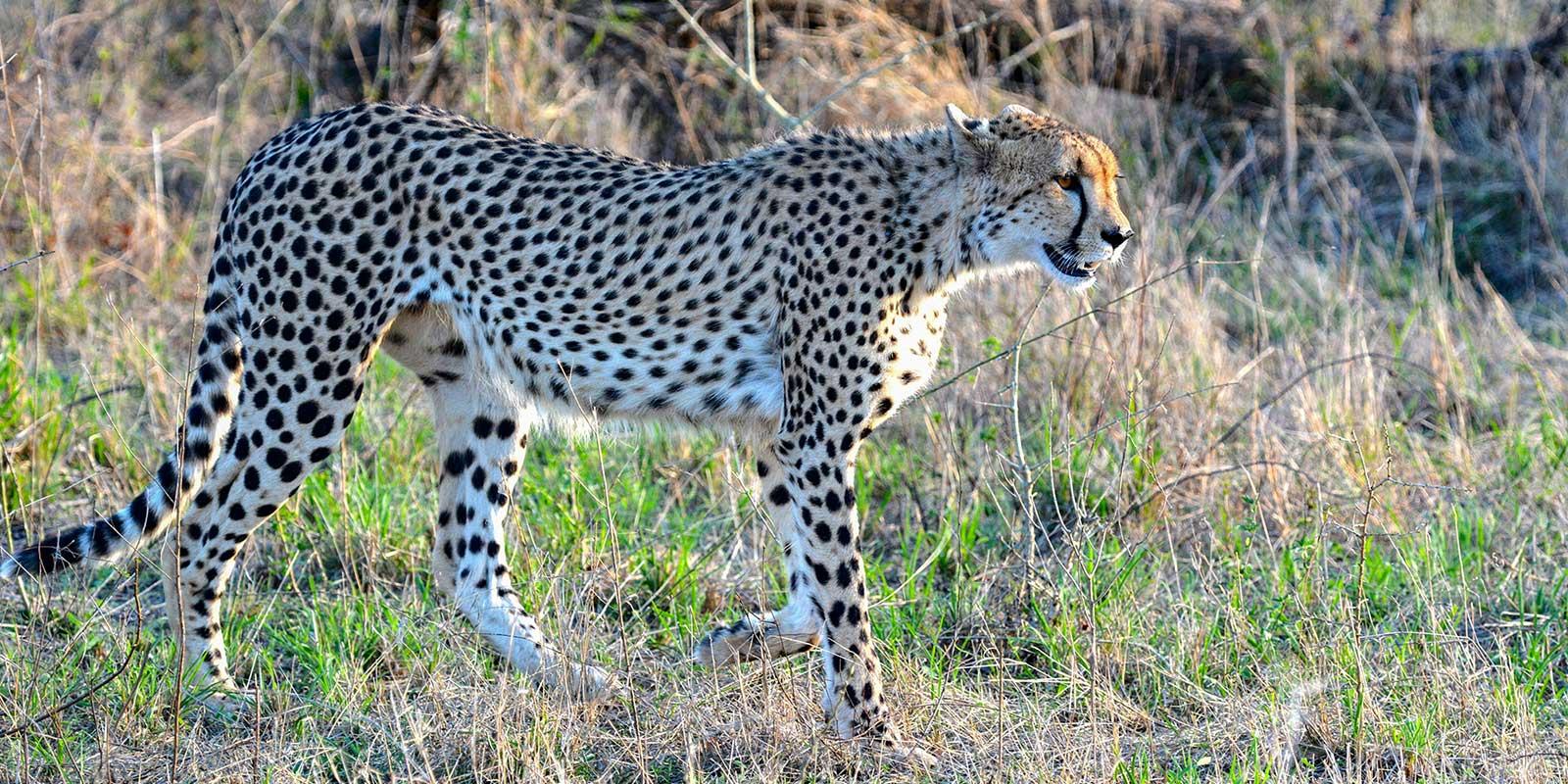 Giraffes are the tallest animals on Earth. They can grow to a height of 4–6 metres and spend most of their lives standing up. Giraffes take quick naps for a couple of minutes during the day standing up. They even give birth while standing up.
Just like human fingerprints, no two giraffes have the same coat pattern.
Other species often stick close to giraffes, using them as early warning systems. Their tall necks and excellent vision allow them to spot predators such as lions and hyenas from far away. When giraffes start running away, other animals follow suit. 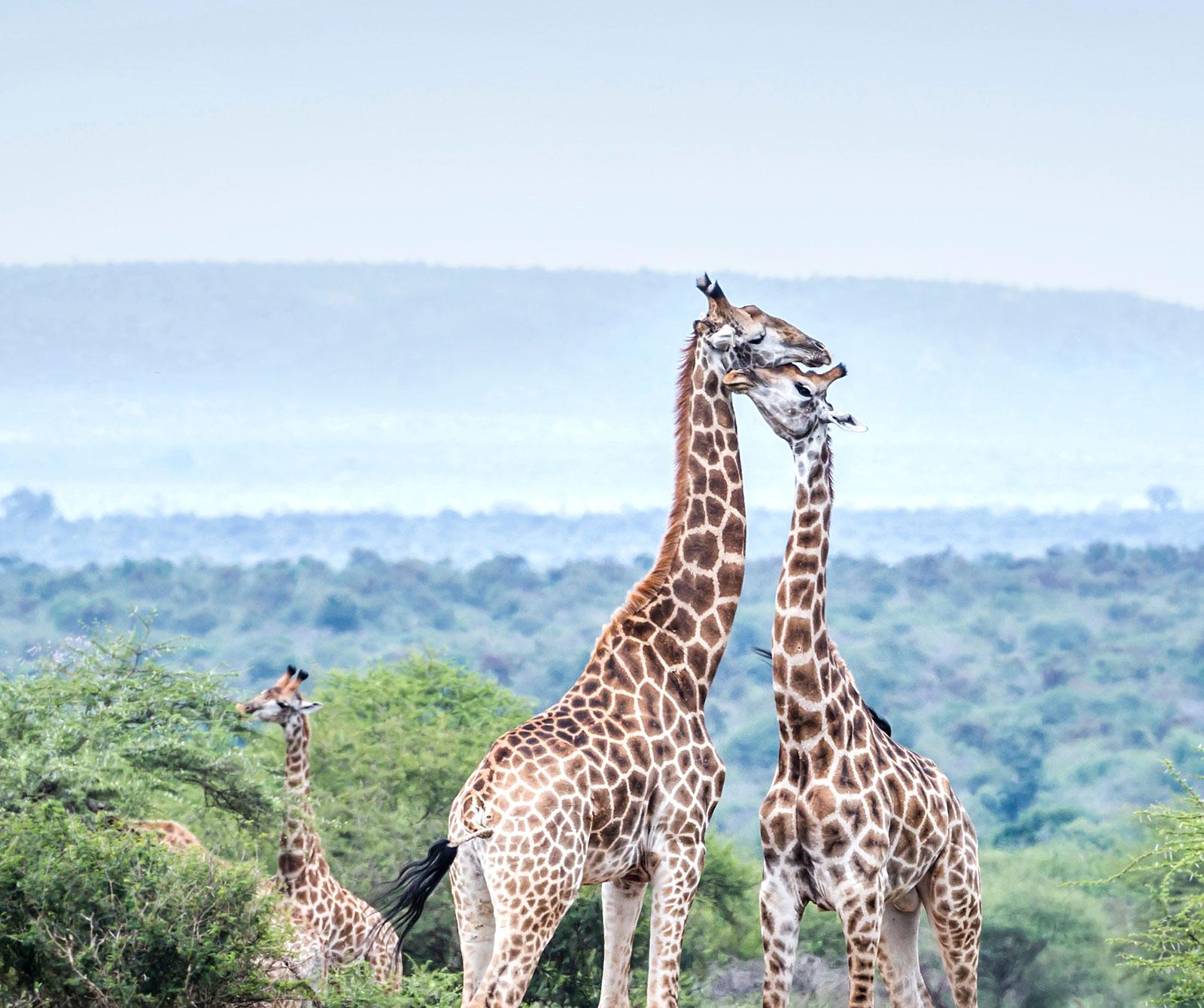 Under threat
An estimated 111,000 giraffes remain in the wild on the African continent. Numbers have dropped by 30% in the last 15 years, and they have already disappeared from seven African countries. In the Great Limpopo Transfrontier Park, you will only find approximately 4,500 giraffes, 446 of them in the Gonarezhou Park in Zimbabwe and about 25 in the Limpopo Park in Mozambique. Poachers hunt them for their meat, hide, bones and hair. They are killed for their bone marrow and brain, which is believed in some African societies to be successful in treating AIDS. In other countries, they are slain for their tails, considered a status symbol. This, combined with overharvesting by the trophy hunting industry; disease, war, and civil unrest; as well as direct, indirect or perceived competition for resources with humans and their livestock, has meant the species is in serious trouble.

Taking action
Many organisations fight to ensure the survival of wild giraffes. These aim to:
• Educate communities about the importance of giraffes to ecotourism. Giraffes are much more valuable to communities alive than dead.
• Promote conservation agriculture that increases harvests, while ensuring giraffe habitat remains healthy.
• Counter the loss of giraffe habitat and food through reforestation projects. 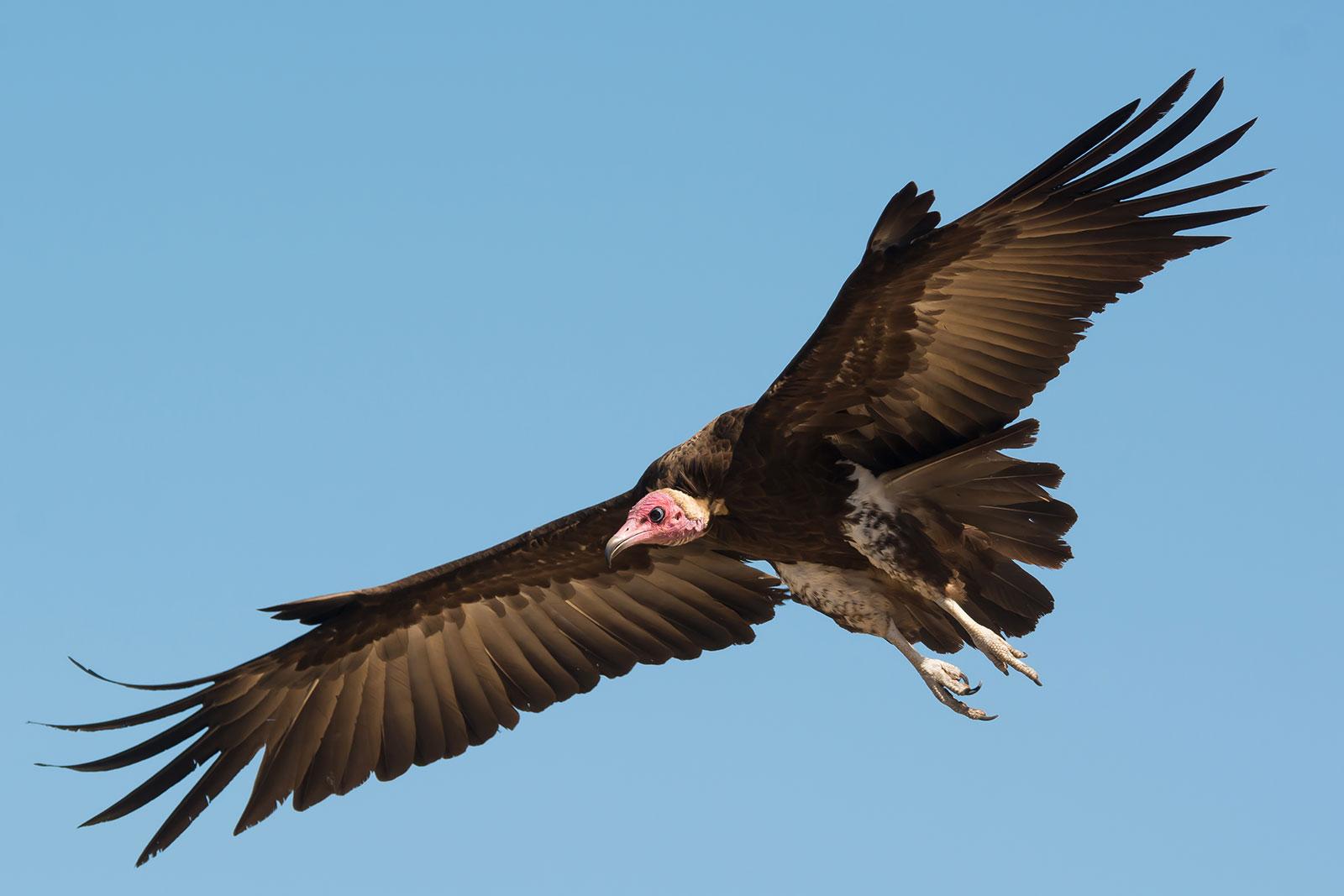 Of the 23 species of vultures, 14 are considered threatened or endangered. In The Great Limpopo Transfrontier Park, the critically endangered hooded vulture flying here is one of more than nine species of vultures.
Vultures are very important members of an ecosystem. They fly huge distances to pick rotting carcasses clean and thereby prevent the outbreak of disease. Vultures flocking to a carcass are the first sign that an animal has been poached. To avoid detection by rangers, poachers lace the poached carcass with agricultural pesticides, killing all animals that feed on the carcass, including vultures. This is resulting in the killing of many vultures. 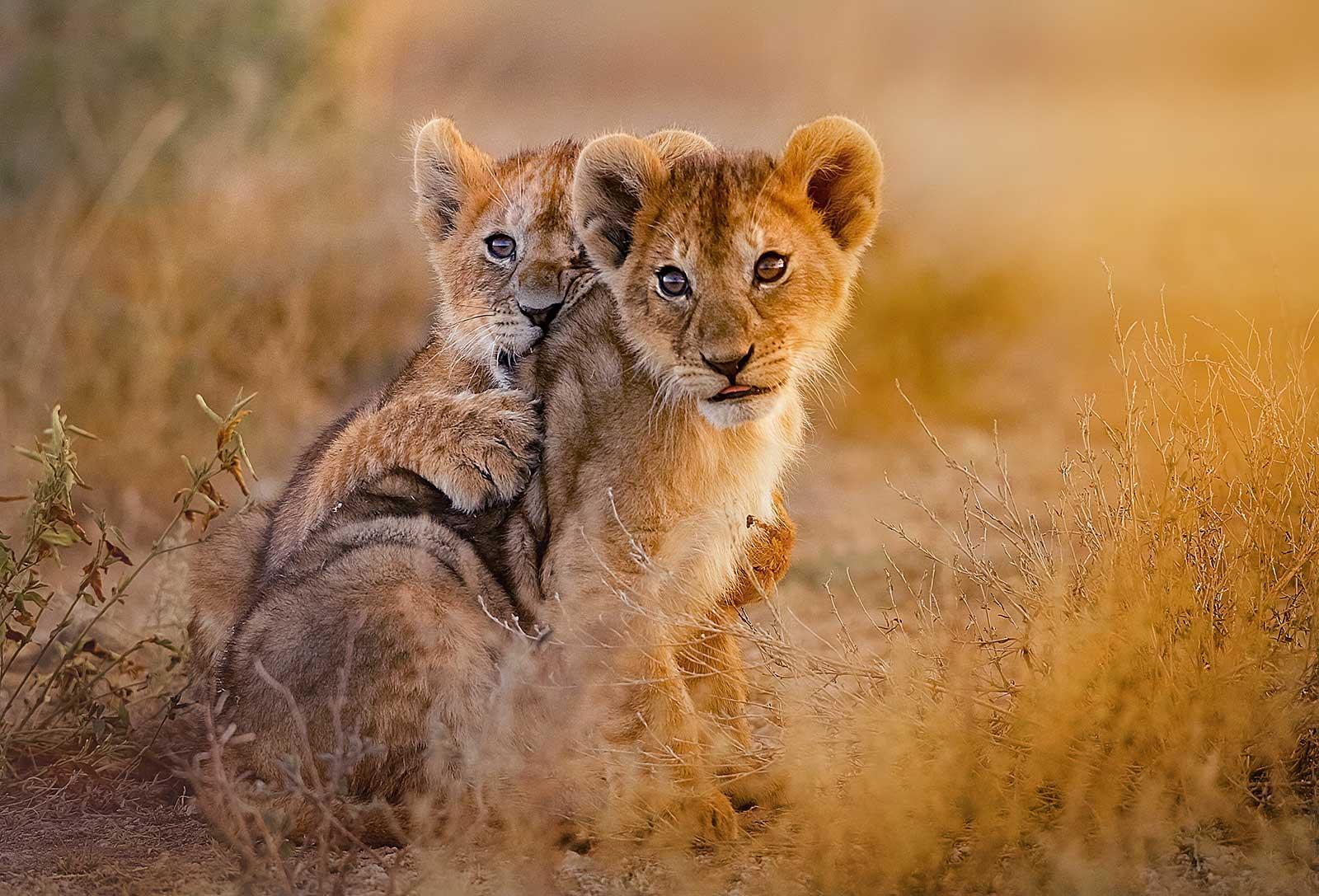 One in nine lions left

A hundred years ago more than 200,000 lions roamed the African plains. Today less than 23,000, just one in nine lions, remain.
Lions can see six times better than humans at night and hear prey from as far as 1.5 km away. As large predators who hunt small game as well as larger species such as zebras, giraffes, and hippos, lions play an important role in their ecosystems. Without lions, there is a risk for overpopulation of other large predators that can lead to the extinction of smaller species.
Lions are also a vital member of The Big Five, attracting thousands of tourists to Africa each year and bringing in employment opportunities to the continent.

In the Great Limpopo Transfrontier Park, 1,600 lions roam in the Kruger Park in South Africa, 66 in the Limpopo Park in Mozambique, and in the Gonarezhou Park in Zimbabwe less than 33. The lions’ shrinking habitat pushes them into closer quarters with humans and depletes their food source, causing them to revert to hunting livestock. More often than not this results in the lions being killed in retaliation. Bushmeat poaching is decreasing their food source even more. In some instances, bait laced with highly toxic agricultural pesticides is used to attract and kill lions.
Increasingly, lions are also being poached for body parts (bones, teeth, claws, paws, and skins) largely traded in Asia, but also locally. Excessive trophy hunting adds even more pressure to the survival of the lion. In the Limpopo Park, a special anti-poaching unit focuses on the protection of the ‘King of the jungle’. They patrol areas that lions are known to inhabit, to deter poachers. Another focus is on reducing human-wildlife conflict, including proper predator-proof fencing, putting in place compensation for livestock losses, as well as the relocation of predators to areas where the human population density is lower. 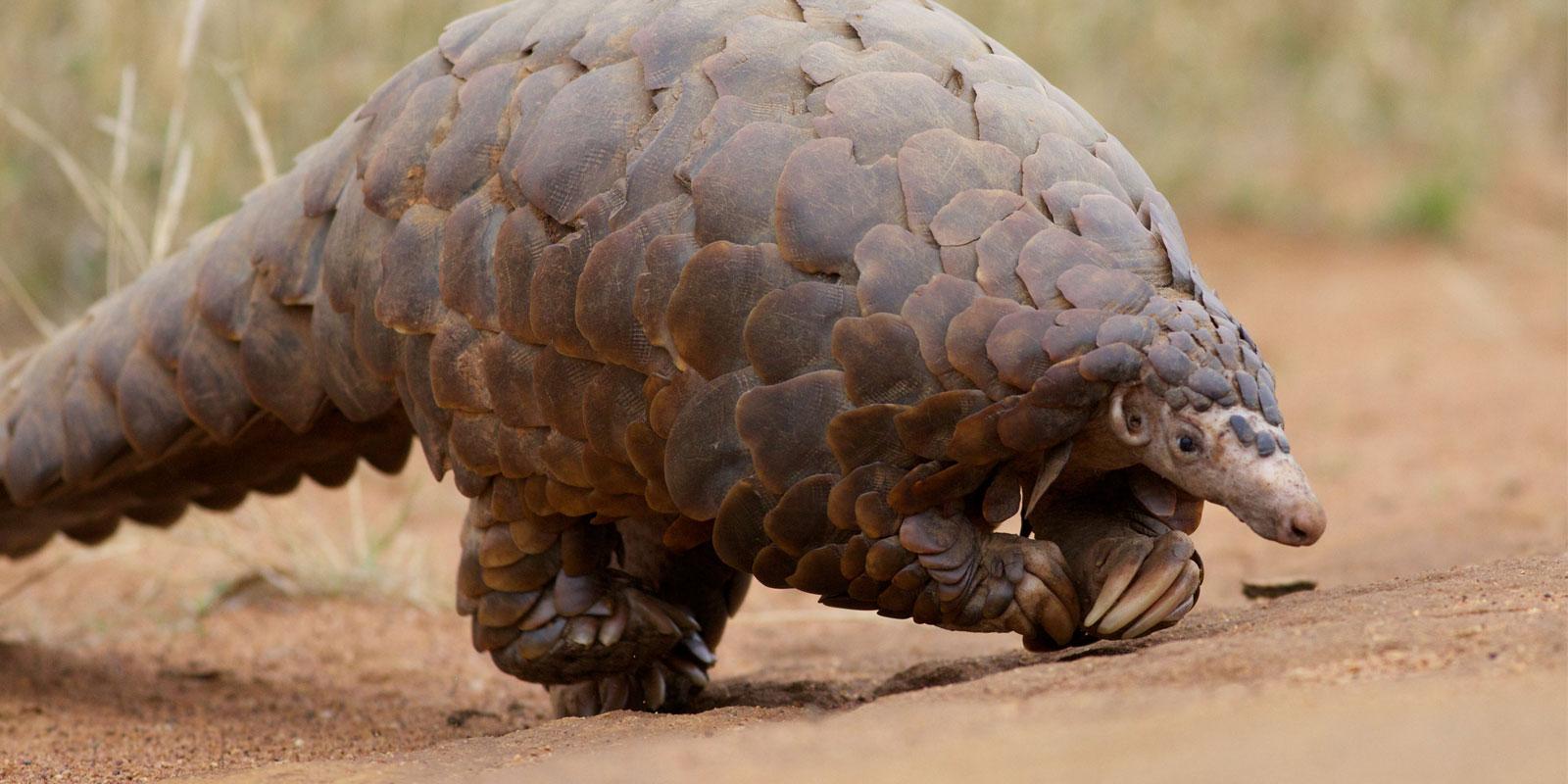 Eats 70 million insects!
Four of the eight species of pangolins live in Africa. Pangolins mainly feast on ants and termites using an extraordinarily long, sticky tongue, which, when fully extended, is longer than the pangolin itself. Their insatiable appetite for insects gives them an important role in their ecosystem: pest control. One adult pangolin can consume more than 70 million insects annually.
The international trade in pangolins is banned, yet pangolins are the most trafficked mammal in the world. They are poached mainly for their meat and scales. Their scales are used in traditional Asian medicine, their meat is considered a luxury food in many parts of Asia, and their skins and other parts are used for purposes such as fashion. Much like rhino horn, the demand from Asia is increasing as their own pangolin species have declined. 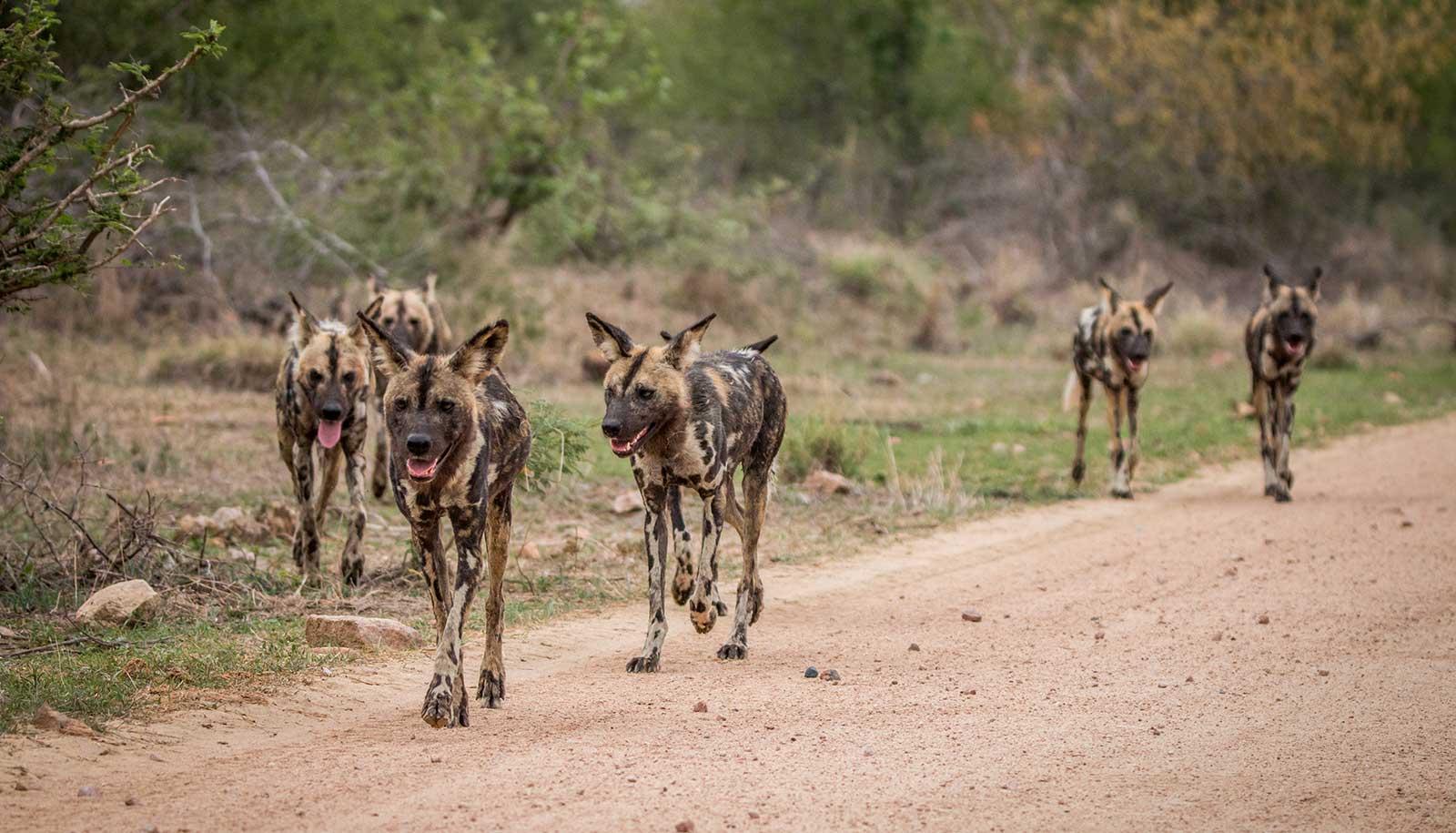 Wild dogs under threat
African wild dogs are highly intelligent animals that live in packs. Of the large carnivores, wild dogs are the most efficient hunters, who work as a well-coordinated team flawlessly during a hunt.
Wild dogs display behaviours that support the health of the pack. This includes sharing a kill, even with members who weren’t involved in the actual hunt, and non-breeding adults sacrificing their own nourishment to ensure the pups in the group get enough to eat and grow. When a dog becomes ill, injured or elderly, restricting them from hunting, the rest of the pack cares for and feeds them.
The wild dog is one of the world’s most endangered mammals. Populations of African wild dogs were once estimated to be 500,000. Today they have decreased to just 3,000–5,000 adults. In the Great Limpopo Transfrontier Park, estimates place 450 wild dogs in Kruger Park in South Africa, 220 in Gonarezhou in Zimbabwe, and an unknown number in the Limpopo Park in Mozambique. The wild dogs’ dramatic decline is largely due to human persecution, disease, and shrinking hunting areas.