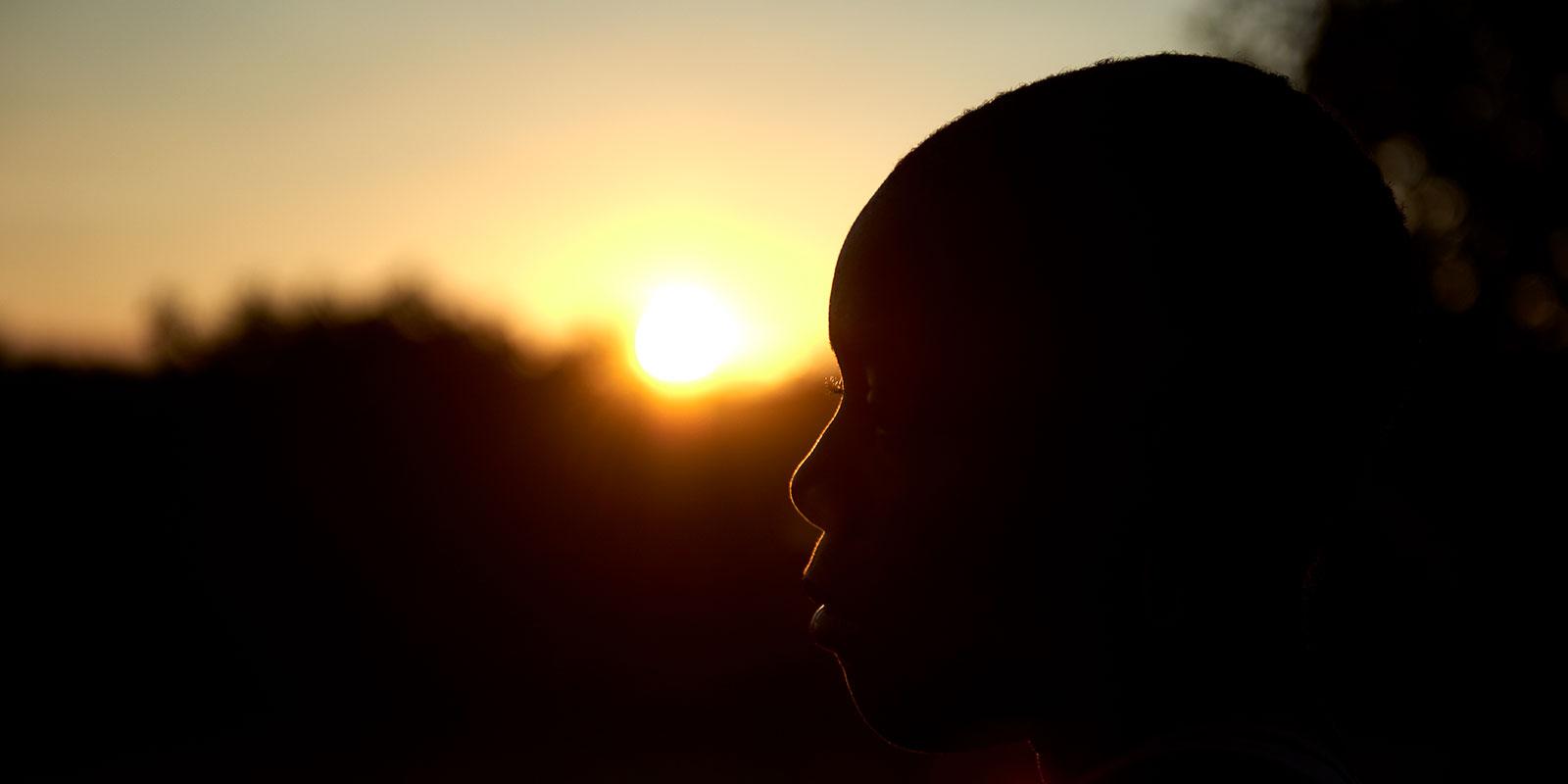 “Dad used to go poaching in Gonarezhou National Park so he could pay my school fees. But now the rangers have increased security and he’s had to stop. It means I can’t go to school anymore, because we don’t have the money. Now I’m afraid that I’ll be married off and never achieve my dream of becoming a ranger,” says Blessing, 15.

“Dad hunted buffalo and impala and sold the meat. He and mum used the money to pay the school fees for me and my siblings. But now the rangers have increased their presence in the park to protect the wild animals. Many poachers are being arrested and put in prison. Last year, dad realized that it was just a matter of time before it would happen to him too, so he decided to stop. At the same time, I had to quit school."

“I really miss school! My life was so different then. I met my friends and played netball during break. I learned so many important things at school. My favourite subject was Content which taught me a lot about the environment and society. I also liked languages, both English and Shangani. When I was going to school, it was fun to be a child. I laughed a lot and felt free.” 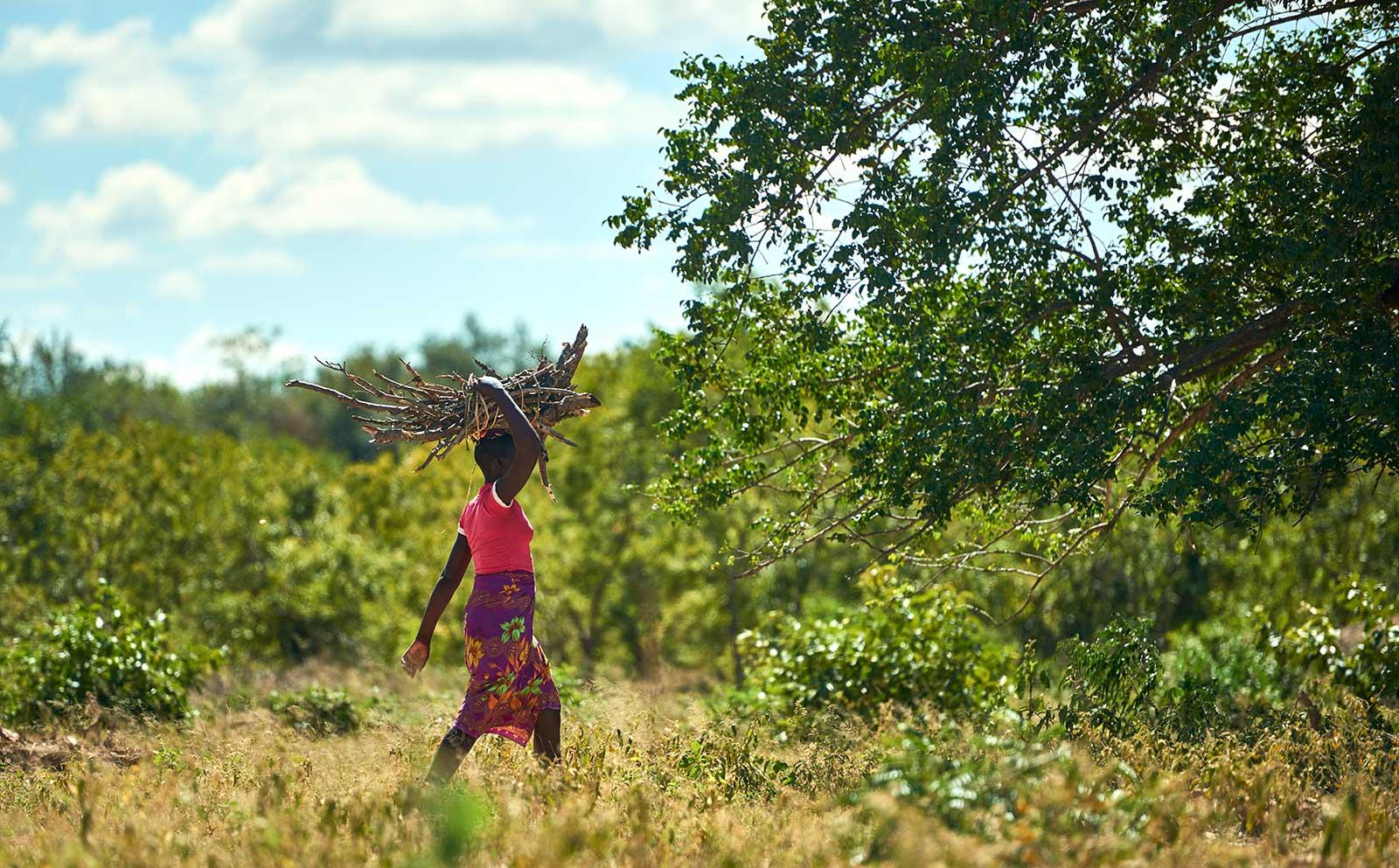 “Many girls my age who don’t go to school are already married,” says Blessing.

“Now all I do is work. I wake at four in the morning and clean the yard. Then I light the fire to heat water. While it’s heating I wash plates and saucepans from last night’s meal. I used to be putting on my school uniform at this time after getting washed, and then I would go to school. Once I’ve made breakfast for everyone I go to fetch wood and water instead, and I wash the family’s clothes. There are nine of us in the family, so I have to do the washing every day; otherwise, it will be too much in one go. As evening approaches I start making dinner, which is ready at sunset, at six o’clock. Sometimes we sit and talk and tell stories after dinner; otherwise, I go straight to bed because I’m so tired. It’s the job of the eldest daughter to look after the household here, and I do almost everything.”

“I’m not allowed to leave home and meet my friends, because I’m a girl. I don’t really know why. Maybe because my parents are afraid I’ll get into trouble. That I’ll be assaulted or maybe get pregnant. This is how it is for most girls my age, but not for the boys. They’re free to go anywhere and meet their friends. That’s how it used to be for me too until I reached the age of about 10. Although I understand that my parents want to protect me, I don’t think it’s fair that boys get a lot of freedom while we don’t. I’d like us to be able to be free to go anywhere without the risk of something happening. The way things are now, I feel very alone and isolated.” 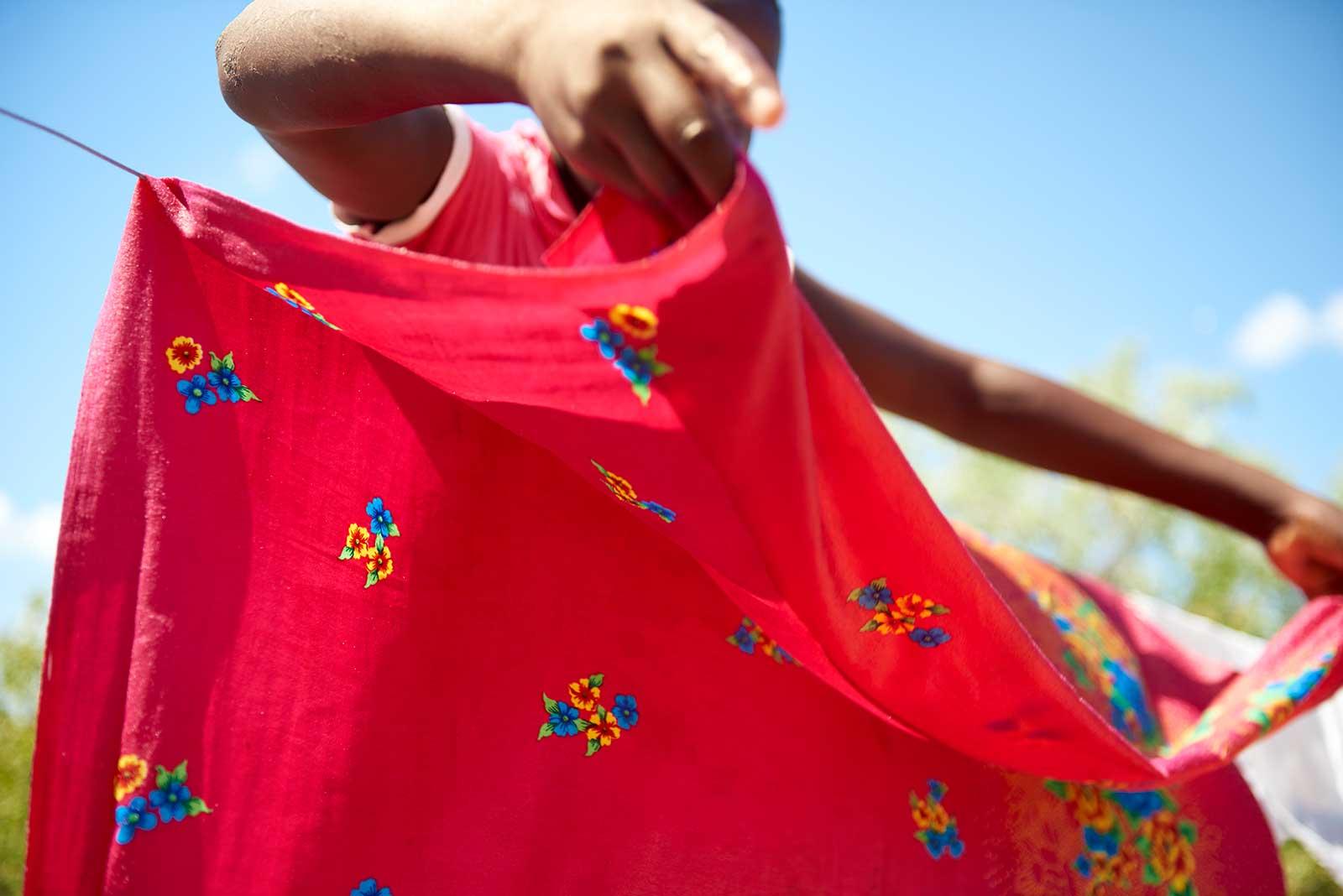 “When I was going to school, it was fun to be a child, but not now. I felt free then. Now all I do is work,” says Blessing

“One of the reasons why parents are afraid that a daughter will be assaulted, get a boyfriend or fall pregnant is that it would ruin the family’s reputation. If a family gets a bad reputation, it will be hard to arrange a good marriage for the daughter. As it’s often such a long way to our secondary schools and we run the risk of being assaulted on the way there, many girls are forced to quit once they finish primary school. Very few end up going right through secondary school. Many girls get married off at the age of around 14. The husband pays lobola to the girl’s family, such as cows or money, when they get married. That’s why some families choose to marry off their daughters at a young age. Sometimes the money is used to pay for the sons’ schooling. That’s so wrong. It’s oppression against us girls! Why don’t we get the education we are entitled to? We should get to learn and understand the same things that boys do. So we can live a good life together.”

“It’s adult men who are marrying young girls. I think it’s strange. It’s wrong to marry a child. Children aren’t ready for marriage. My mum and dad have talked about marrying me off and it makes me frightened. I’ve told them I want to finish school first. But because we can’t afford the school fees anymore, they say it would be best if I got married now. It makes me scared about the future."

“When I went to school, the Chilojo Club came to teach us. We learned about nature, the natural cycle and about wild animals and why they need to be protected. They also told us how important it is for us to look after our animals and our natural environment because tourists want to come and experience everything in Gonarezhou. I’ve dreamed of being a ranger ever since. It’s really important work, helping protect the animals that can give us both money and jobs, something that we really need here. And I love animals!” 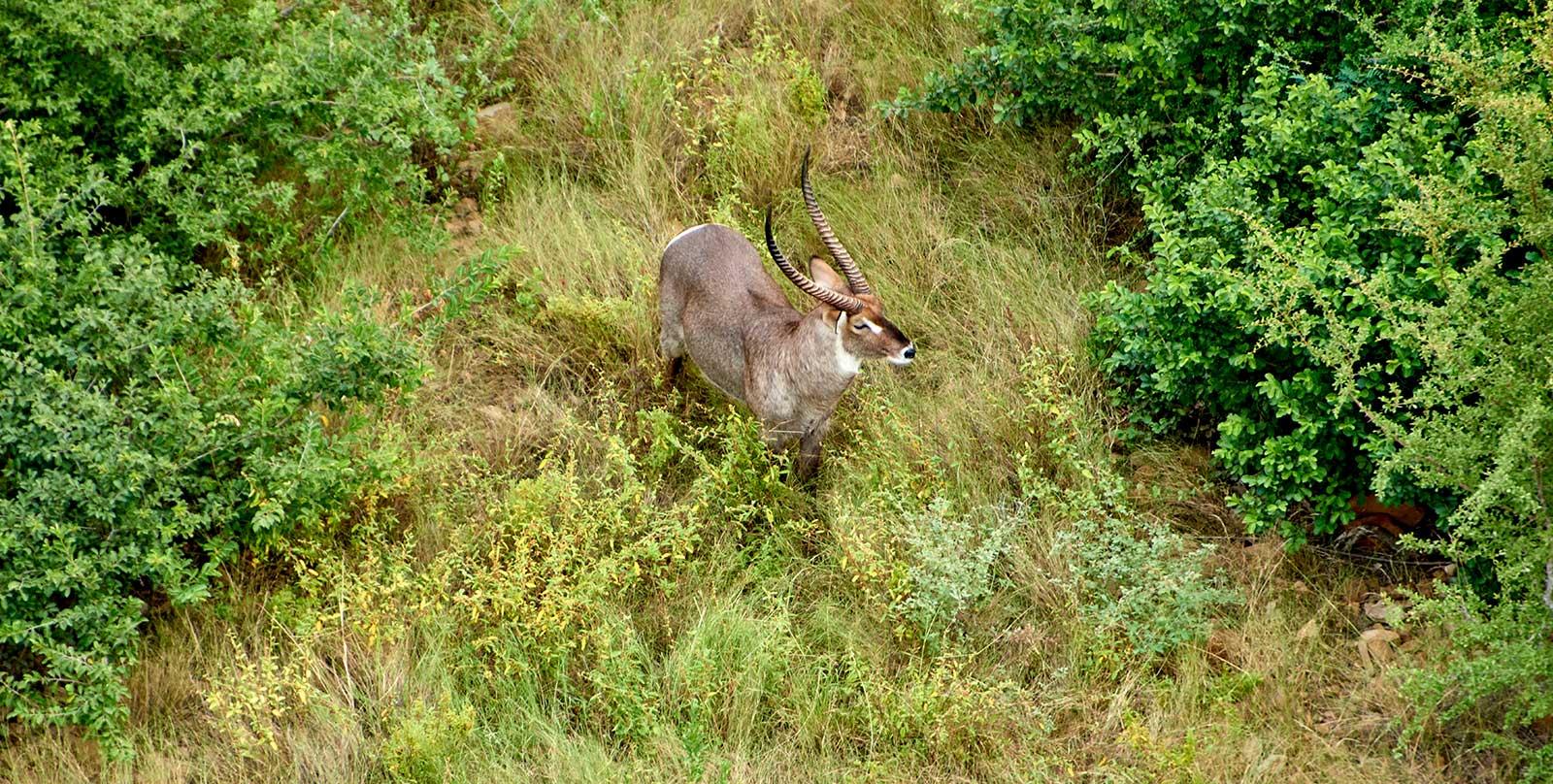 “Now I’m afraid that I won’t be able to be a ranger, because I’ve been forced to quit school. I probably won’t have enough skills to cope with the training, if I even get accepted now that I haven’t finished school. And if I’m married off, I can forget becoming a ranger. Then I’ll be someone’s wife instead. Most men here probably wouldn’t allow their wives to work in the national park. Here, a wife’s job is to take care of the house, her husband and children, not work outside the home."

“My dad poached out of necessity. When he had to stop because of the rangers increasing security, I couldn’t go to school anymore. Meanwhile, I want to be a ranger...I know it’s a contradiction! But I’ve learned in the Chilojo Club that our wild animals are worth more alive than dead. That they are part of our heritage and we must look after them for the future. I really believe that, even if it’s caused me major problems.”

In the area where Blessing lives, the Chilojo Club has started making chilli bricks (elephant dung and chilli), together with the villagers to reduce conflicts with elephants. If the villagers place hot coals on the chilli bricks and put them around their fields in the evening, the chilli smoke disturbs the elephants so much that they stay away. The harvest is saved without a single elephant being shot or a single person getting injured. The bricks are both cheap and simple to make because lots of people grow chilli and there’s plenty of free elephant dung around. 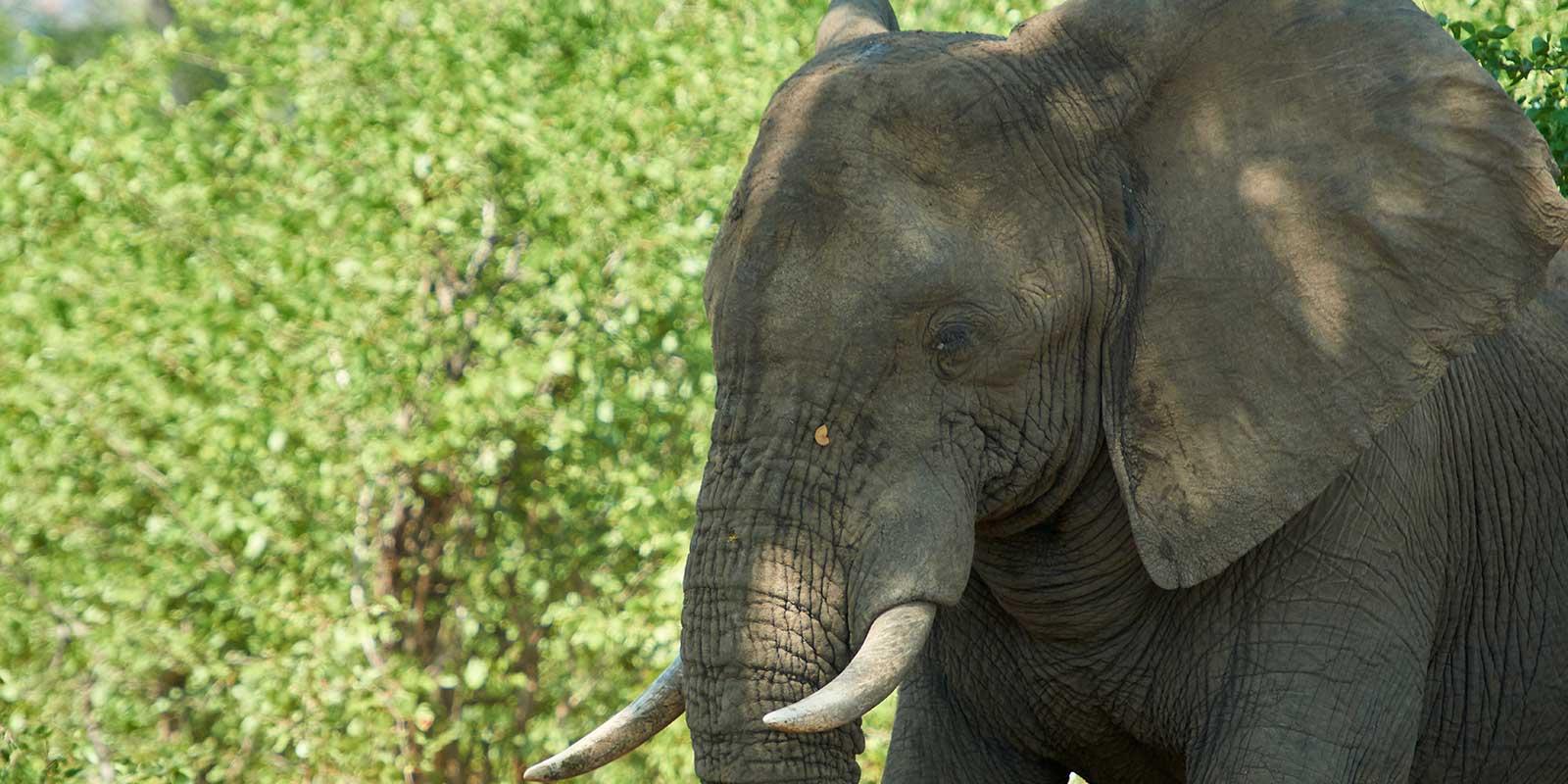 There are 11,000 elephants living in Gonarezhou, and the park is also quite rightly known as ‘The Place of Elephants’.

Gonarezhou – The Place of Elephants

“Elephants are my favourite animal. They are so beautiful and wise, but they can also be dangerous and create a lot of problems for those of us who live near the park. They wander into our fields and trample and eat our crops, which we need to survive. Maize, millet, sorghum, watermelon...they eat everything! When the elephants come we try to scare them away by lighting fires, clapping our hands, shouting and cracking our cattle whips. It makes a whistling noise that the elephants don’t like. But we’ve learned to be careful because elephants can get really angry if you irritate them. They can go on the attack, and then you have to watch out. A man got trampled to death a few years ago in one of the neighbouring villages. If we don’t manage to scare the elephants off ourselves, we’ve learned to contact the rangers for help. The rangers can fire warning shots in the air, and then they usually go away. Many people really don’t like elephants, but I love them!” says Blessing.