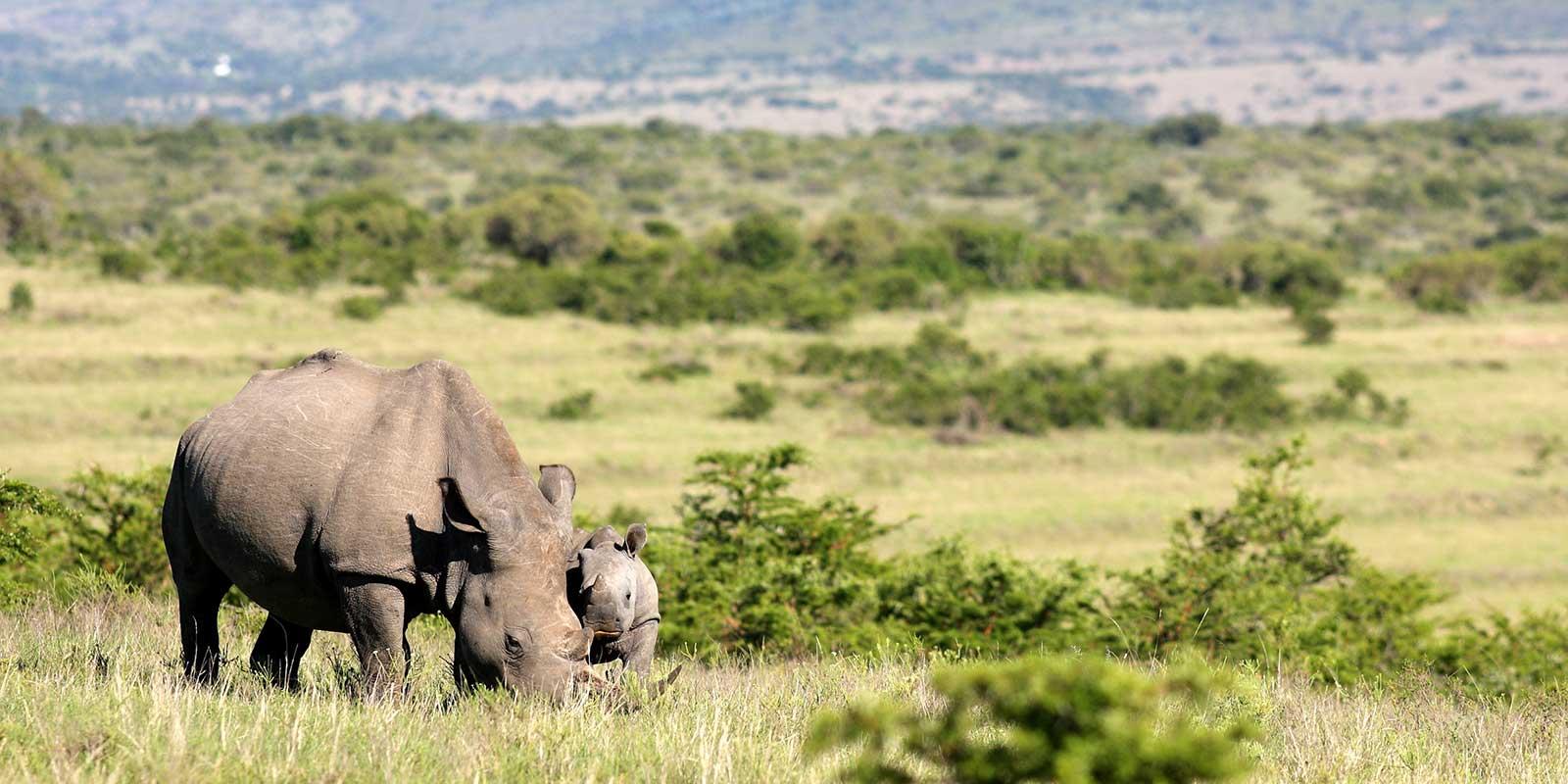 The rhinoceros has been around for 60 million years. The name means ‘nose horn’ and is often shortened to rhino. There used to be 30 different species of rhino, but now there are just five species left and all of them are endangered.

In the peace park, Great Limpopo Transfrontier Park, there are now no rhinos left in the areas that fall within Gonarezhou National Park in Zimbabwe and Limpopo National Park in Mozambique. An average of two rhinos are killed every day by poachers for the sake of their horns.

A rhino calf weighs 60 kilos when it is born, and the white rhino, the second-largest land mammal, can grow to a height of 1.8 m and weigh 2,500 kilos!
Rhinos have a reputation for being dangerous and grumpy. This is mostly because their eyesight isn’t very good, so they cannot see any further than about 15 metres, making them vulnerable and liable to feel threatened.

As mega-herbivores, rhinos play a crucial role in ecosystems. They are considered an “umbrella species”, which means that other species, from plants and birds to insects and mammals, depend on them. They consume large amounts of vegetation, which helps to keep a healthy balance within the ecosystem. Removing rhinos changes the landscape and makes it unsuitable for species such as antelopes, which in turn leave the area.
As one of The big five, rhinos contribute to economic growth through tourism, which creates job opportunities and provides benefits to local communities.

At the beginning of the 20th century, there were more than 500,000 rhinos. Today, only 23,500 rhinos survive in the wild. An average of two rhinos are poached for their horns every day. There is a ban on the international trade of rhino horn. However, criminal syndicates organize the illegal poaching and trafficking of rhino horn from Africa to Asia. While poachers risk severe punishment and their families are often severely affected, the syndicate leaders make vast amounts of money.
Buyers are mainly based in China and Vietnam, where rhino horn, which is made of clumped hair or keratin, the same type of protein that your hair and fingernails are made of, is believed to have healing powers and is used in traditional medicine. The horns have also become status symbols and are sold as a high-value gift item.

Several organizations are fighting to save the rhino. Peace Parks Foundation is:

to be better at detecting, tracking and arresting poachers, and providing them with helicopters, tracker dogs, thermal cameras and radar systems.
• Improving wildlife crime investigations through strengthened cooperation between security and law-enforcement agencies in Mozambique, South Africa and Zimbabwe.
• Working with communities in and around parks to develop economic alternatives to poaching.
• Saving rhino calves that have been orphaned due to poaching.
• Educating young people in Vietnam and China about the consequences of poaching and the illegal trade in rhino horn.