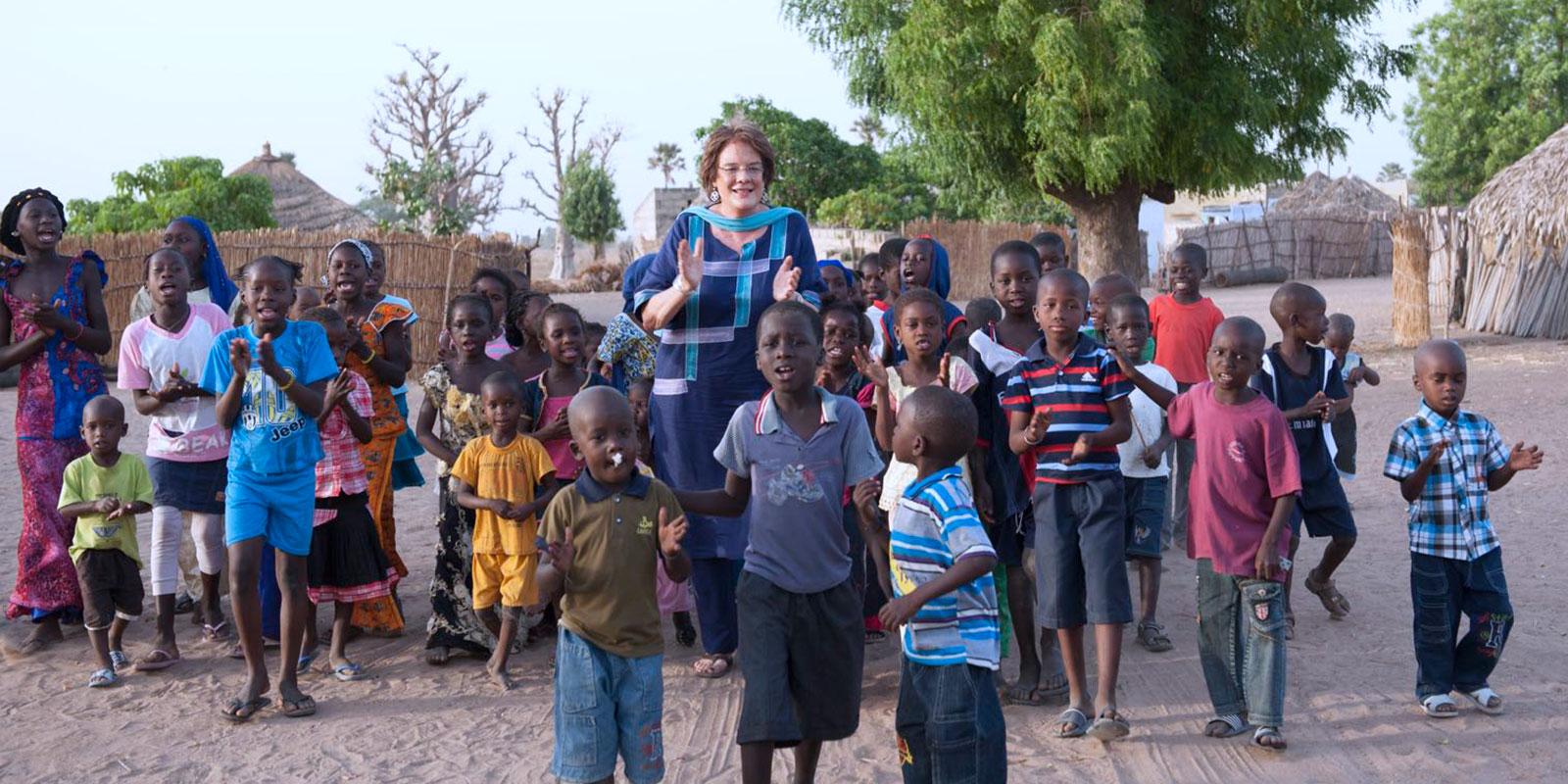 Molly Melching arrives in the village of Malicounda Bambara in Senegal on a historic day in 1996. Until this day, the girls in the village have always been subjected to female genital cutting and child marriage. Molly hardly dares to believe the message that has reached her from the village women: ‘We have decided to stop cutting our girls.’

When Molly drives her jeep into the village, she is welcomed by many people. Singing and dancing, they make their way to the meeting place in the shade of a large tree.
“We greet you by your first name and your surname,” says the leader of the village women. Before, even talking about female genital cutting was prohibited, so Molly is amazed. Have the women really decided to talk openly about this tradition, and to put a stop to it? Has her organization Tostan’s training in health and human rights contributed to ending a thousand-year-old tradition that has seriously harmed millions of girls in this and other villages?
The women under the tree begin to talk about how they made their decision.
“We have received information that we didn’t have before,” says Kerthio, one of the women. “We now know that most women in the world are not cut. That surprised us. We have also learned that a lot of the pain and problems we women live with are linked to the cutting carried out on us as children.”
Female genital cutting is a dangerous procedure, which leads to lifelong health problems. But it is a tradition that meant that a girl could be married and accepted by the village community.
For a long time, the village women have talked about how girls are cut and forced to marry early. For two years, trainers from Tostan have given them support and information on human rights, the body, and health.
“The most important thing we have learned,” says Kerthio, “is that there are human rights. And that we, as adults, are responsible for protecting the rights of the child. That gives us the strength to stand up for our rights.”
“We have talked with the religious leaders and found that this tradition does not come from Islam. Putting a stop to the tradition doesn’t make us bad Muslims.”
The women decide to hold a ceremony, during which both women and men explain why the decision to end female genital cutting is an important one. And how the discussions in the Tostan program helped them to make their decision.
Molly joins in the dancing and shares the joy of everyone in the village. 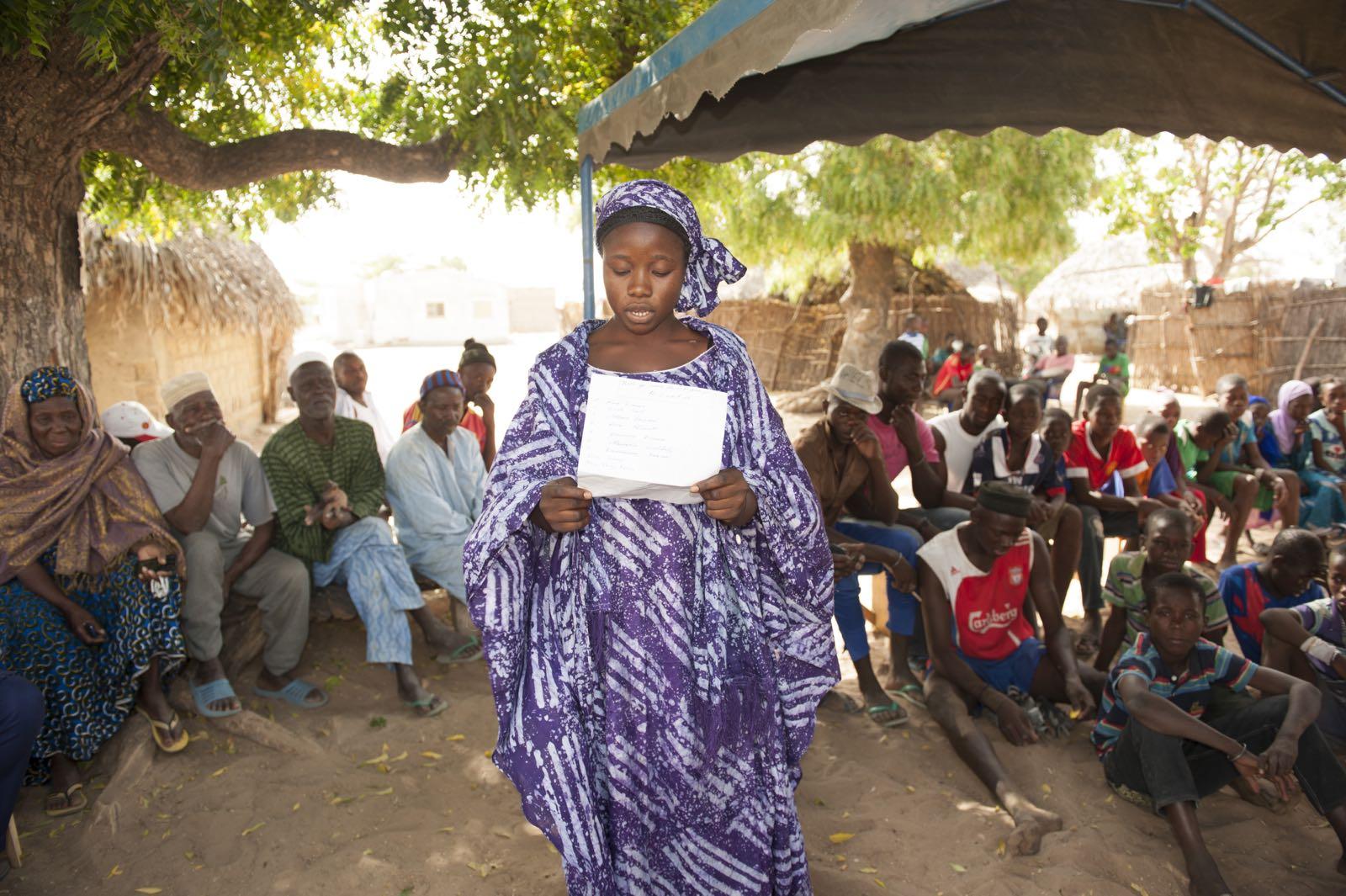 Adama, 15, is talking about the Tostan program in front of the whole village. When her mother was young, girls weren’t allowed to talk like this, but now the village meetings include everyone.

First children’s centre
When Molly first came to Senegal as a 24-year-old in 1974 it was to study children’s stories in French, as part of her university studies back home in the USA. But when she arrived in Dakar she had a feeling: ‘This is my place in the world.’
The stories she was studying were in French, but the children’s language was Wolof.
‘How are the children supposed to learn when they can’t speak or read books in their own language?’ Molly asked herself.
She learned Wolof and started a centre where children could read, experience, learn and develop in their own language. There were no children’s books in Wolof so one night Molly wrote her first story book in Wolof, about a girl called Anniko. She ran the children’s centre for six years.

Village life
After six years at the children’s centre in the capital, Molly moved out to a village to learn about the situation for children there.
There was no school in the village. Molly lived there for three years and created an educational program in the local language, based on traditional songs, dances and poems. The program grew out of information on health and hygiene, and discussions and shared problem-solving with the people in the village. In 1991, working with the local people, Molly began to develop what was to become the organization Tostan. Tostan is a Wolof word for the moment when a chick breaks through the egg shell. Tostan’s aim was to share knowledge with other villages in different local languages.
Once Molly and Tostan began raising awareness of human rights, this sparked discussions about child marriage and female genital cutting. But in 1996 when the village of Malicounda Bambara was the first village to say they had stopped cutting girls, many people were angry. Both women and men protested. They called the women in the village horrible names, and said that they would never stop cutting girls.

The cutter who quit
In another village lived a woman called Ourèye Sall. She was a traditional cutter, the person who carries out female genital cutting on the girls in the village.
Ourèye was only fourteen when she was married off to an older man. But before this, her mother had taught her how to perform the cutting procedure. That knowledge gave her a better status in the new village, and brought in money to her family.
By the time Ourèye came into contact with Tostan’s education program, she already had her own children and grandchildren. They had been cut, just like all the girls in the village.
“We were sitting in the classroom and I turned to my daughter and said: ‘No. It’s over now. I don’t want to cut girls any more.’ Peace and freedom from violence are more important than money. I realised that then,” says Ourèye. Ourèye wanted to share this new knowledge so she visited many villages. Adults listened to her because she was a cutter, and she stood to gain from the tradition continuing. 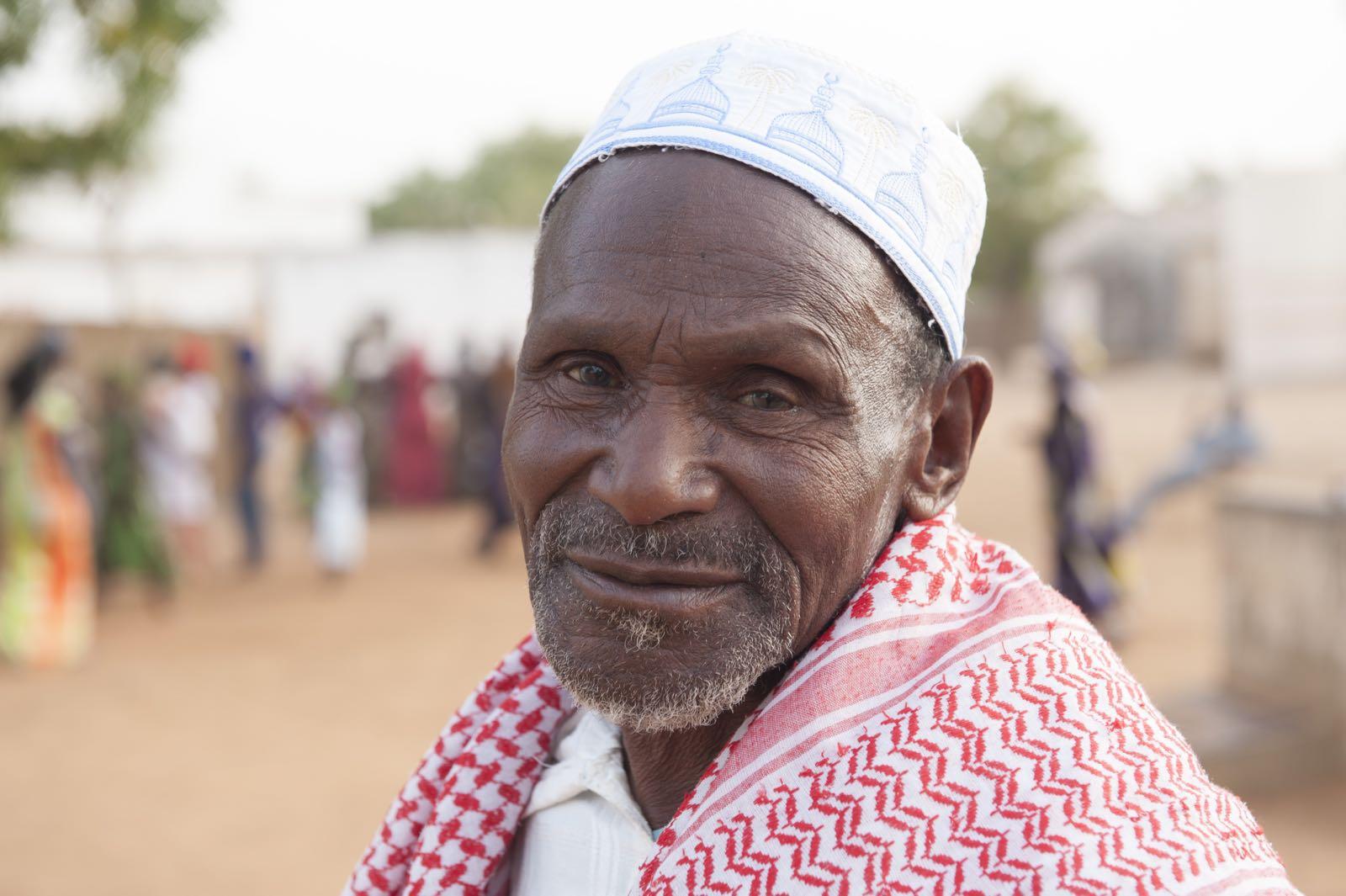 Imam Demba Diawara has been an important figure for Molly and Tostan. Once he understood how wrong the tradition of cutting was, he realised he had to talk to relatives in all the villages to put a stop to it. “I myself will walk to ten villages where my relatives live,” he said.

The wandering imam
Molly’s good friend, an imam called Demba Diawara, was angry at first that Tostan were discussing this tradition. But after talking about cutting with doctors, religious leaders and women in the village, he came to Molly and said:
“I was wrong. I didn’t know how damaging this is. Now that I know, I have to do something about it. But to be able to end this tradition we must persuade our relatives and friends. We have to talk to all the villages, and I myself will go to ten villages where my closest relatives live.”
Demba walked from village to village. His message was met by anger and fear, but he was always careful to be clear and respectful. Slowly, after many months and discussions, the decision was made. Together.
Hundreds of people gathered in the village of Keur Simbara to celebrate the decision to stop female genital cutting. Now Molly, Tostan, and the people in the villages knew that to create a future where girls are free from cutting, everyone must be involved in the decision. When a decision is made together, it is strong!


Now 7,200 villages
When Molly visits Keur Simbara now, 20 years have passed since the village began working with Tostan. And no girl has been cut here for eighteen years. Many other villages have made the same decision. Through the Tostan program, over 7,200 villages in six West African countries stopped practising female genital cutting, child marriage and forced marriage. Hundreds of thousands of girls’ bodies are unharmed, and free from pain and discomfort. More girls get to go to school instead of being married off early and becoming mothers while they themselves are still children. Boys too are free from early marriage and can finish their education instead.
Changing a tradition is hard. Together with Tostan, these villages have done something really unusual.
“Human rights hold the key. When we talk about rights and responsibilities, everyone understands. Everyone has a right to freedom from violence, and at the same time, it’s everyone’s responsibility to contribute to a society that is free from violence. The Tostan program shows that although not everyone has gone to school, everyone can make wise and brave decisions,” says Molly.
The Tostan program means that village residents can continue to make good decisions to improve their lives – about access to schools, toilets and medical care, about awareness of malaria, or about whether to build a well or a library. And about registering adults so that they can vote. Molly listens to the village council explaining the village goals in terms of electricity, vaccination, road improvements, and women’s participation in decisions. She is delighted to watch the young people’s play about choosing their own husband or wife, as part of the Tostan program. Then the dancing continues. 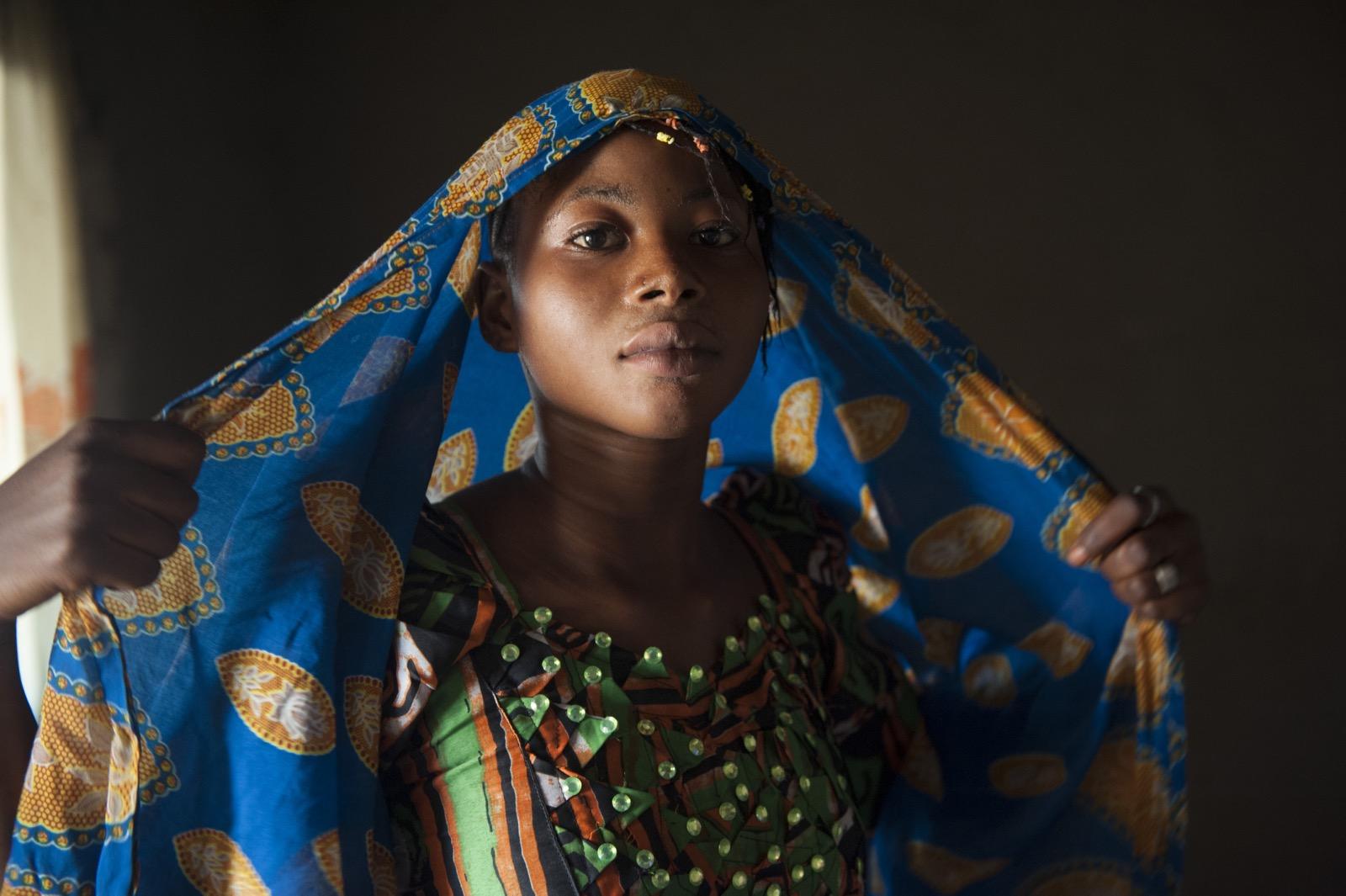 “I know that I’ll have problems when I’m older and I’m giving birth. Thanks to Tostan, nobody does it anymore here, and nobody forces us to get married before we are eighteen.”
Nuima, 14, in Senegal, who was cut as a baby