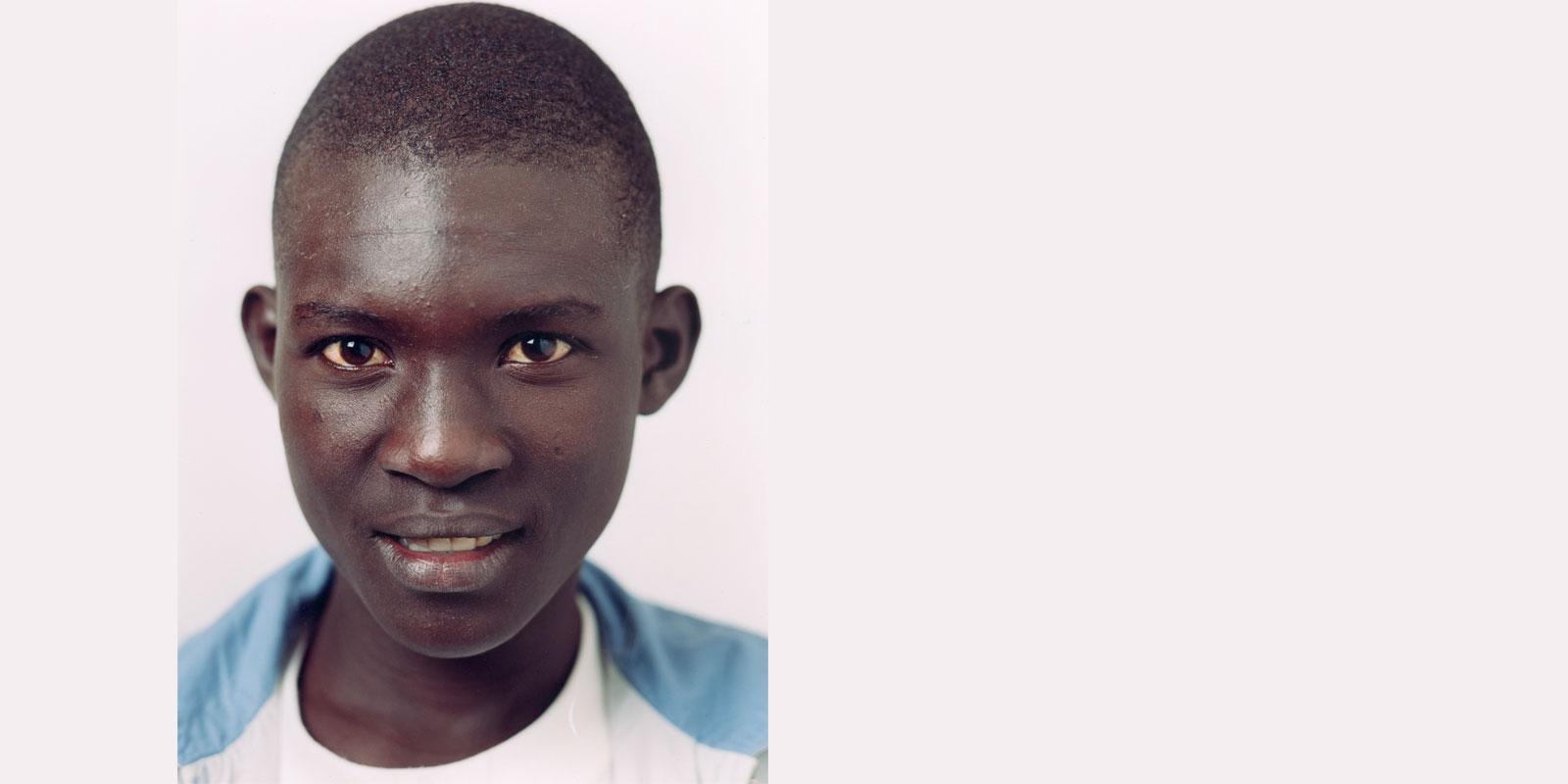 Charles was a jury member from 2002 to 2003, representing child soldiers and children in war. He is now an Honorary Adult Friend.

In Uganda, thousands of children have been kidnapped by the rebels in the Lord’s Resistance Army to become soldiers. One day when Charles came home from school, he was abducted by the rebels.
He was only ten. For four years he didn’t see his family, and was forced to fight in the war. This is an excerpt from the story about Charles when he was a Child Juror:

It was early morning in Adak, a little village in northern Uganda. Everyone was still asleep, but Charles slept fitfully and had a nightmare. In it, he saw himself standing by the village well with a heavy rifle in his hands. There wasn’t a soul in the village, and he felt completely abandoned.
When Charles woke up, he was worried. He told his mother Akwero about the dream. She calmed him, saying it was just a dream; he should forget about it. After a breakfast of maize porridge, Charles felt better.

Forbidden Friday Like everyone in Adak, Charles’ mother and father were farmers who grew beans, maize and sugar cane. If it had been an ordinary weekday morning, Charles and the other children in the village would have helped in the fields for an hour before leaving for school. But because it was Friday, no one in Adak was working.
In the woods around the village, the rebels in the Lord’s Resistance Army had decided that anyone who worked on Friday should be killed instantly. The rebels were at war with Uganda’s government, and the villagers knew that if they didn’t obey them, it would mean trouble. Charles had heard that the rebels sometimes kidnapped children.
After breakfast, Charles went direct to school. He liked school, and never missed a day. During breaks, he played soccer and when the last lesson was over, he and some other boys in the class went to the pond and bathed before they went home.

Scared and abandoned From a distance, the village looked the same as usual. But when Charles approached his own house, he saw that Adak was full of soldiers, maybe 200 or so. They were carrying out sacks of maize and beans from the houses and herding the cattle together. Charles saw that his own goat was tied up with the other animals. A soldier sitting outside the house waved to Charles. He seemed friendly and said:
’When you’ve dropped off your books, won’t you come back and join me?’ Charles was unsure. He didn’t know if the soldier was with the regular army or the rebels. His mother tried to warn him, but it was too late. When Charles came out again, the soldier handed him a large bag and a heavy ammunition belt and said firmly:
’Let’s go!’ When Charles found out that the soldiers were rebels, he was so scared that he couldn’t move or resist. His body went stiff, and he couldn’t even cry. As he was led away, he saw his little brothers Opiyo and Oryang peeking nervously from one of the clay hut’s windows. His mother Akwero couldn’t help him because the soldiers threatened her with their guns, and his father Ogaba was not even there. Charles felt scared and abandoned, just as in the dream.

The long march The rebels ordered everyone to march to their base in nearby Sudan. Charles and the other captives were forced to march single-file carrying enormously heavy bags, even though most of them were only children. Charles saw his friend Nyero farther back in the line, but they couldn’t talk to each other because it was forbidden. They marched all night. The next day, they rested a short while, and then marched all night long again. Some children tried to flee, but they were shot on the spot. It was very hot and dry, so other children died of exhaustion and dehydration. After a week, those who had survived the march arrived at the rebels’ camp. Charles was almost done for; his legs were swollen and his feet were full of sores. But instead of taking care of the injured children, the rebels said: ’Now that you’re here, forget your families and villages! If you talk about them or try to run off, we’ll kill you!’

Stealing and shooting At camp, military training began direct. Frightened, Charles obeyed the rebels so they wouldn’t get angry. He quickly learnt how to use a rifle and how to attack an enemy. Food was always scarce at camp. Sometimes the children went without food for several days. Finally they ate leaves and roots that they dug up to survive. Since the rebels thought Charles was shaping up, it wasn’t long before he was put in a group and sent into Uganda to steal food and medicine. They plundered villages and if anyone resisted, Charles and the other child soldiers were forced to kill them. Sometimes they were forced to kidnap other children and take them back to Sudan. In one attack, Charles was seriously wounded in the leg by gunfire, but he survived.

Running for his life Although the rebels had forbidden the children to think of their families, Charles thought of this parents and little brothers constantly. He was so homesick that his body ached. Not a single day passed when he didn’t try to think out an escape route. When he had been with the rebels for four years, he was sent to Uganda once more to steal food, but this time he found himself only a few kilometres from Adak. Maybe this was his chance... As dawn broke, Charles was marching last in line, on the lookout. Without anyone seeing him, he managed to leave the path and hide among the trees. He closed his eyes and held his breath a long time, then he ran as fast as he could toward the village. He ran for his life because he knew that if they caught him, they’d kill him outright. He ran into the village, and for the first time in four years, he saw his family! Everyone was overjoyed, but Charles’ parents knew they couldn’t stay on in Adak. The rebels would search for him as soon as they saw he was gone. The family left the village as soon as they could, and that was lucky. Only a few hours later, the rebels came to Adak and when they didn’t find Charles, they burnt down his family’s house out of revenge.

Dreaming about peace Today Charles’ family lives in a refugee camp in Gulu in northern Uganda. The camp is under the government’s protection and an organisation called Gusco takes care of Charles, who can finally be a child again. He plays soccer and goes to school, and since he lost four years of schooling in the war, he’s in the fifth form although he is 16. Charles still has nightmares from his life as a soldier, and they’ll probably never go away. But he has new dreams too: ’I want to become an engineer and build roads, but most of all I dream about peace. I’m on the jury for The World’s Children’s Prize for children who were forced to be soldiers. My pal Nyero, who was kidnapped with me, is still a child soldier. By telling about the problems in Uganda I hope to help him and other kidnapped children be free one day.